Where did the 3 dot 'user is typing' feedback you see on messenger apps originate?

I've noticed a lot of messenger apps such as HipChat and Facebook Messenger have implemented a horizontal 3 dot icon which signifies a user is typing. 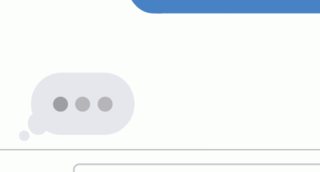 I'm curious to know how this icon came about and what the history/thought process behind it might be?

Originally it signified a pause or tailing off in speech but, in modern times, it also signifies and implied continuance of any textual content. An example of the modern usage might be in webpages where you sometimes find "More after the jump..." meaning that an article will be continued after clicking a link.

Both the original (pause) and modern (continuance) meanings are relevant here as that is exactly what's happening when your friend is typing their reply to you via your IM.

How do you feel about the typing indicator—“David is typing”—that appears on your buddy’s screen while you’re composing a message in chat? Does it make you feel self-conscious about how long you’re taking to write a message? Do you hate it when you are multitasking and your erstwhile best friend keeps sending messages like “Are you still there? What are you doing? Do you still like me? Have I fallen in your heart?”

If so, you have me to blame, because I was one of the people who invented the damn thing. But I can explain everything...

I Built That “So-and-So Is Typing” Feature in Chat

The other answers have explained (excellently!) the origin of the ellipsis symbol, and how older chat programs displayed typing indicators. However, this doesn't directly answer the question.

To my knowledge, the first mobile app use of the "three dots in a bubble" indicator is iMessage. As Samuel pointed out in his comment, this was taken from iChat on the desktop, which had this UI as early as 2005.

When iMessage launched, the "typing" indicator (and read receipts) was a big differentiator from SMS. A lot of other mobile apps have since copied the typing bubble UI, even though desktop chat apps have had these types of indicators for a while.

I would think it is based on the ellipsis, which, according to Wikipedia, is a punctuation mark indicating: "[…] an unfinished thought, a leading statement, a slight pause […]".

When you see an ellipsis in a sentence, you know the sentence is not (yet) finished. When you are in a written conversation, it seems the best representation of: my sentence is not yet finished.

I believe the use of the ellipsis in modern messaging apps derives from its use in some Internet chatrooms of the mid-to-late 90s. I can recall myself and others, when in essentially one-on-one conversations with other chatroom patrons, sometimes responding to the other person's statement first with simply "..." and then with an actual sentence.

Why did we do this? I can't speak for others but I remember that when I used "..." in chatrooms I meant it to convey a befuddled snarkiness, rather than a "Please Wait" prompt, because I didn't like what the other person said and I was a brat. So perhaps we should interpret it in modern messaging apps as an implicit "Bite Me" from the other person. ;D

But perhaps some of the young people that frequented these chatrooms at that time simply took the "..." to mean "Please Wait" and then grew up to become software engineers that worked on the messaging apps that use "..." as we see it today.

Not the answer you're looking for? Browse other questions tagged mobile mobile-application chat typing or ask your own question.

1
What UI design should I use for a smartphone app?
1
Combining Settings and About screens in a mobile web app
2
Adopting sidebars in iOS apps
3
Why is the navigation below the brand strip at the top in the new Twitter & Vine app?
11
Where can I find a list of names for mobile ui components?
5
How to allow for 'exploration' in your user testing?
4
Should new users in a message thread see previous messages?
3
Should the tab bar be accessible on sub pages in a mobile app?
1
Why do some companies ask the users to "Text for a link" to download the app?