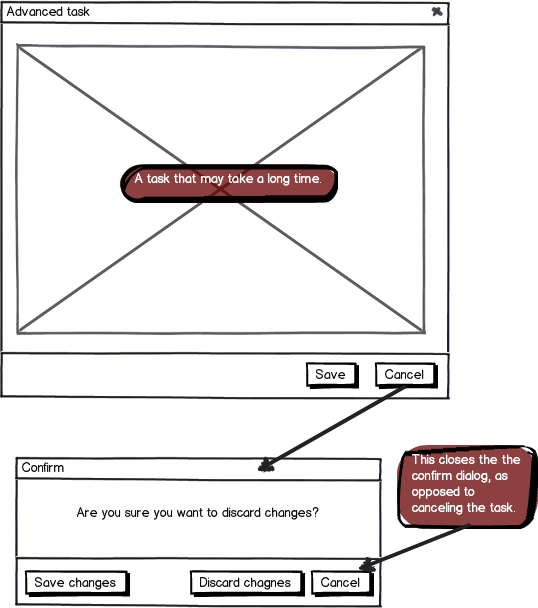 I'm making a Windows desktop application. It's "too hard" to build in an Undo action.

I have a task that opens in a modal window, it's a task that may take the user a while to do, so I want to prompt them to save changes if they hit cancel by accident.

If they press cancel, the confirm dialog will say something like "Changes have been made, are you sure you want to discard these changes?"

That doesn't seem right, because to continue with their original decision to cancel, they'll have to [ Cancel ] > [ Don't Save ].

Use more specific language in your CTAs

Perhaps you've got a style guide that might prohibit this, but part of the existing problem is that the microcopy is typically generic.

There's a few other things you can do to help here.

Personally, I think in 2016, the progressive save, manual and automatic, should be the default position of any interface build that captures info more complicated than a few words. Users should not lose work these days. With this sort of thing it's less important to try and catch all mistakes with dialog buttons.

It seems the goal of question is to stop the user from losing work and that isn't going to be optimally achieved whatever combination or words and buttons you choose. People will struggle with button position, automatic responses to pop-ups and confusion over wording so it's better to try to catch them from ever falling into this trap.

If you are going to ask your user a question, you should ensure the call to actions answer that question, e.g. Treat this like a conversation:

"Are you sure you want to discard changes?"

This can be simplified to:

Clicking No cancels the Discard feature and returns you to the form to continue working.

"Discard the changes you made?"

Make the buttons simpler as well "Yes, Discard" and "Cancel".

Not the answer you're looking for? Browse other questions tagged windows-os modal-windows save cancel or ask your own question.

3
Behaviour of save function on modal window
8
Best Practices: Save and Exit in Software UI
5
Save & Add New, Save & Close, Save, Done, Cancel
2
Should I trigger an 'unsaved data' dialog on the cancel link?
0
Desktop: Placing warning labels inside a Save dialog vs. popping-up a new window?
6
Confirm cancellation
1
What should the save/cancel button do on the parent modal?
4
Display annoying important message or leave it out?
2
Data table: inline edit - save/cancel on other action?
5
Should you allow users to "save" options that haven't changed?