Why do trunks for cars typically open upwards?

The other day I saw a car where the trunk's door opened sideways like the other car doors, instead of upwards like they usually do. That got me thinking; why does the door for a car's trunk usually open upwards?

physical cars doors
Share
Improve this question
asked May 5 '16 at 11:01

It gives the car more symmetry which has aesthetical, structural and usability benefits. Aside from the symmetry there are some other benefits too.

Humans like symmetry, it's that simple. With a top-swing you can put one hinge left, one right, and the handle in the middle. And when opened the (a)symmetry is even more noticeable.

Because of the shape of cars, trunks tend to be wider than they are tall. This means that swinging it open like a door means you need more rear clearance: 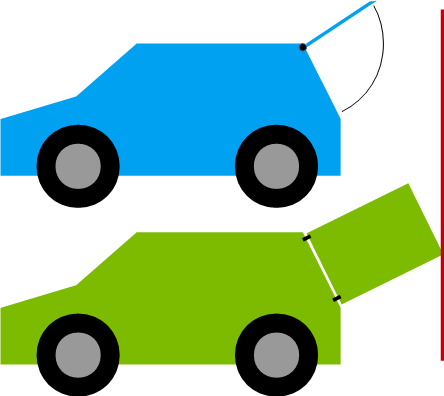 And I believe it is generally easier to open because the upwards trajectory is smaller (due to the width/height ratio and smaller swing angle), meaning you don't have to move out of the way as much, nor move as much to the end of the swing.

Bonus: it kind of works as an umbrella - I doubt this is a serious design consideration though.

Something hanging below two hinges is much more stable than side-hinges. Both in terms of internal structure and in terms of movement. Grab a sheet of paper and try ot both from above and from the side. The top held one will simply hang down, straight. The side held one will flex and try to hang down.

A side hinging door will also put more strain on the hinges due to there being two kinds of forces at work, and because the door is wider than tall which means more leverage. Also relevant here are a smaller hinge arc (about 90 degrees upwards vs about 180 sideways), the angle of many rear windshields meaning your door wouldn't swing vertically, and wind alignment.

In short, it's more structurally solid, and it's less likely to open by accident.

Like Andrew Martin mentioned, originally a trunk was literally a trunk strapped to a car, and this influenced integrated designs later on.

However, I strongly disagree on there not being an advantage to changes. A trunk is a completely separate compartment, and the vast majority of cars nowadays don't have that. Instead they have a hatchback trunk design which allows you to foldd down the rear seats. This is much more flexible; you can choose whether you want more people seated or more cargo space.

Tall cars, with straight/square rears. And of course when you need to use the roof.

Without the angle or the width-height ratio, a topswing won't really save rear-clearance. And a taller door means a longer lever on the hinges. Having a top-swing door also means you can't put much on the door in terms of storage (cable spools, screw assortment, etcetera) due to weight and accessibility.

This is why vans tend to have two side-swinging doors. Making the door half width fixes the clearance issue and largely mitigates the hinge issues by having a short lever. It doesn't quite solve the left-right accessibility issues though.

It is simply more convenient to open upward as opposed of outward, it can pose as a physical barrier preventing loading from the side and can be impeded from fully opening.

Which small SUVs have a back door that opens to the side?

There are a few design characteristics that, in our opinion, make a swing-gate less desirable than the liftgate alternative, which opens upward.

Why limit the side of the car or the angle at which you can place something in the trunk? You are never going to be on top of the car but you might be on either side/ behind the car reaching into the trunk. My opinion was clearly the car manufacturer that made the sideways trunk was trying to be different or gimmicky and now the user only has 2 directions @ which they can load the trunk.

Originally, trunks on cars were exactly that: wooden trunks strapped onto the back of the car.

The pattern seems to have stuck to a great extent simply because there don't appear to be any advantages to changing it.

There are some variations:

Some Estate Cars/Station Wagons that have a drop-down tailgate to facilitate loading.

And some 4x4/ORV/SUVs that have a rear gate/door that opens sideways to facilitate loading but with the additional obstacle of a spare wheel.

Not the answer you're looking for? Browse other questions tagged physical cars doors or ask your own question.

240
Why do most public toilet doors open inwards?
5
How can the mode of a car's transmission be made more clear?
2
public transit bus stop and door buttons
0
Why do some cars only have a physical lock on the driver side?
4
Why do we say that door knobs afford twisting?
6
How long should automatic doors delay closing?
1
Why do most doors have a knob or handle that must be turned to open the door?
36
Door handle on automatic doors - why?
5
Why do American windows open upwards?
0
Why use a discrete representation for continuous quantities?