Sort by a value not shown in the table

I am working on an application that will run on phones and tablets. The application can be used for attendance management and for viewing hours the user wrote previously. Here is the view for this functionality: 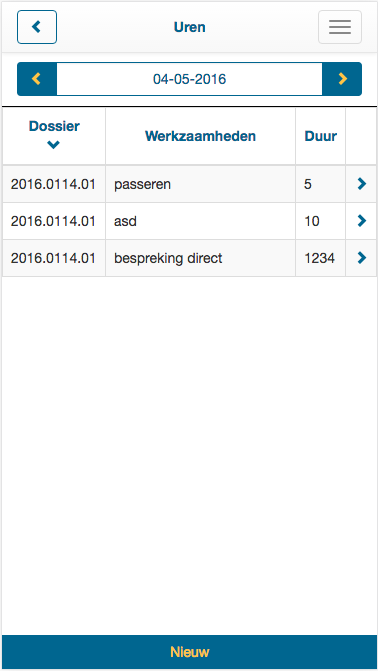 I have trimmed the data down to the absolute necessities, dossier (folder), werkzaamheden (task) and duur (duration) and added sorting for these columns.

However the table shows the hours a user wrote during the day and I would like to sort the table chronologically. But I have no room to add another "date added" column to sort by, and the data it will show (when hours were added) is not at all relevant to my users.

I played around with the idea of a "control center" above the table, but there are other instances of the table were the filter button would be the only thing in it, and that looks hideous. 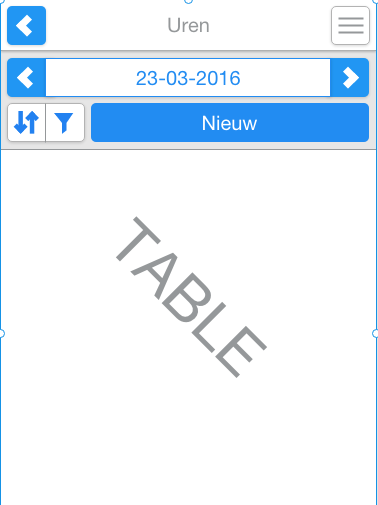 How to sort my table by a column that isn't shown?

I'd recommend against using a table in this instance. First, it's a mobile version which makes the horizontal space restrictive: there'll be lots of wrapping occurring inside the cells. Second, it seems like comparison of tasks (rows) is not your main goal so it's not necessary to make it all that compact.

I'd suggest you use a list of cards, each representing one task. Inside a single card: at the top the name of the task (spanning the whole width), and below the name: folder / creation time / duration. Make the task name more prominent than the rest. And then at the top of your list, above all the cards, a sorting button similar to what you have shown. Or you could combine filtering and sorting under a single option / icon. Re-sorting will probably not occur that often.

You just need to communicate to the user which sort is in place when the sort is triggered, e.g. if it is "Sort by date" then display this text above the table, e.g. show the text "Sorting by date".

Not the answer you're looking for? Browse other questions tagged mobile tables sorting or ask your own question.

8
When is a table the proper way to present data?
2
How to accept multiple types of input to a table cell?
2
Showing ASC/DESC icons intuitively
4
Visual clue to indicate table header might be truncated
5
Does it make sense to put search result filters on the left in a table in which each column is filterable?
0
Transmitted/received packet counts in table... how to disambiguate direction?
8
Why is it often not possible to un-sort a table?
0
Filtering and Sorting a Table that has more than 1 row per user