Designing an expandable UI with plugins

I'm working on a game server, that will allow mods and plugins to be installed.

I'm also working on a creation kit, or content management suite (CMS), to aid in the design of various aspects of the game (such as graphics, sound mapping, NPC data, etc).

For example, let's say an NPC (non-player character) has: a location in the world, a direction they're facing, a name, and a sprite.

Then someone designs a plugin that allows NPCs to have a faction, or city that they're loyal to. Any crime potentially done within the city could have a negative impact on how that NPC views the player. This got me thinking about how I could design my CMS to be flexible enough to support different plugins.

I have 3 different ideas on how to do this. For simplicity, let's assume that the cms will be in the form of a web application.

CMS plugin developers (likely the people who wrote the plugin for the server) add a link to a new web page, that allows them to map an NPC to a specific faction. (similar to creation kit for Skyrim and Fallout) 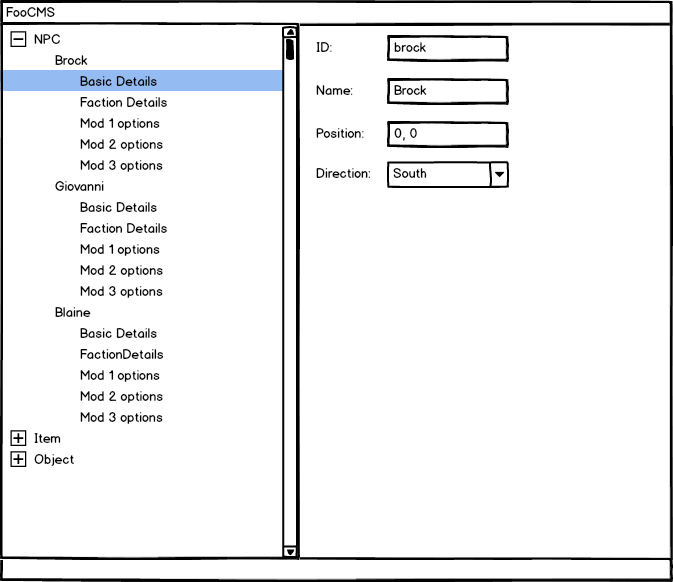 Developers add on to the existing form with the fields they need for their mod. 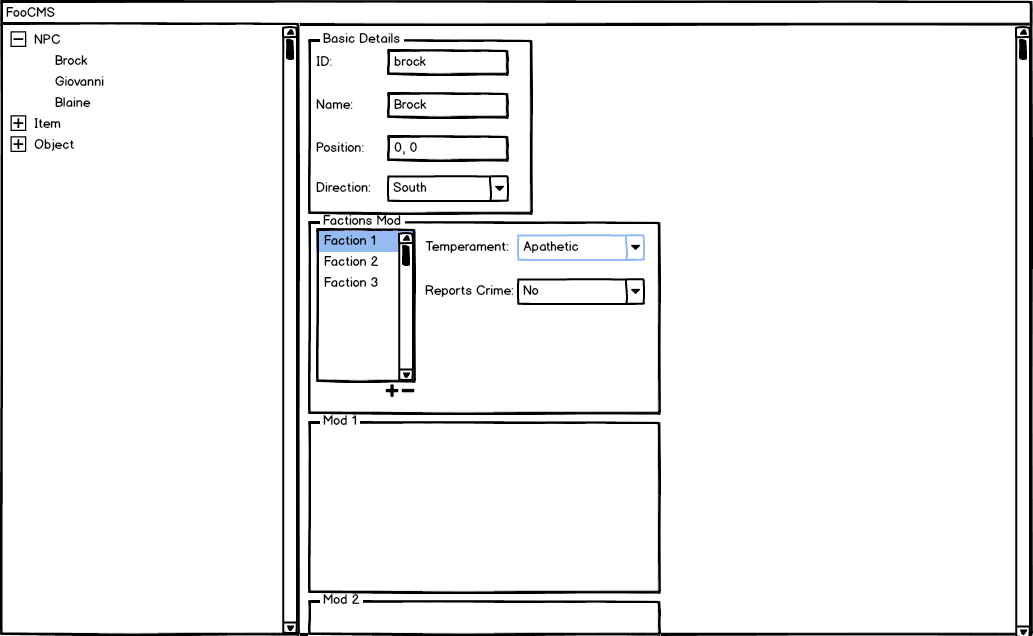 A tabbed panel that auto expands. The last element would be a "+" tab (similar to a browser window). When clicking the "+" tab, a window would pop up asking them which feature they would like to add to that NPC, and would add a new tab specifically for that feature/plugin.

Is there another option that would allow an extendable UI in this manner?

Or you can use Miller columns as in Finder on Mac.

A fourth option would be an extra settings dialog for every plugin. But this would certainly be the worst option because it will separate the options.

Basically you have to take three numbers into account:

Depending on what number is more likely to grow you will have to decide between your three options.

But I think the most flexible (independent of those numbers) and intuitive will be option three, because number of NPCs grows vertically, number of MODs grows horizontally and number of options grows in pages.

I think collapsible section on the right may be better. It makes it easier to read and see the different sections. Tabs are also limited in size and width. With a collapsible section you have more space for the title and purpose of each plugin. It can grow vertically dynamically.

Another way to score this is based on efficiency:

So my vote based on efficiency is option 1.

Your best bet is Option 1. Let me address your concerns:

Unless you can know for sure how many settings each plugin will have, giving an entire page seems to be the most flexible option. Furthermore, it creates a separation in the user's brain that seems useful: There is no interaction between each plugin's settings, and they are completely modular.

"Exponentially" seems like it's overstating the case, here. Yes, they will increase, but only linearly, and you already have a way to toggle the visibility for each character and then scroll through the list.

Regarding your other options, I think the negatives far outweigh the positives. Option 1 seems like the only one capable of dealing with all of the unknowns with maximum flexibility.

Option 1 (with an unobtrusive bread trail) +/- Option 3 Tabs ex. Breadcrub " FooCMS->NPC->Brock " on the right side panel would have the details. But broken down in logical sections see CSS grid layout

Offering a logical flow of choices would be a great start. Think modern shopping cart. With the vast amount and variations of items one may drill down get an item, then find another item quickly. Endless scrolling/swipping would be torture.

Manipulating the dom to remove clutter or add more options - as choices are made - would be a huge bonus for users. Making it an SinglePageApp would be a breeze.

8
Dealing with Area Codes in Phone Number fields
0
Getting input for a one-to-many relationship
8
How to represent a form on a CMS admin panel page that deals with creating/editing multilingual fields
8
Should I combine multiple User and Group management panels into a single screen?
1
Best way to design save action redirection in an admin system
0
Designing a Geographic Form with Multiple Input Fields
4
Keyboard navigation through form with multiple tabs
1
How to display more detailed configuration?
2
2 selection buttons 1 preferred but with different input types
0
How to indicate draft status in a CMS