Is there an obvious way to signal that an action leads to a confirmation?

For instance, a "Delete" button leads to a confirmation message of "Are you Sure - Yes / No".

Any tips to make people aware of the fact that clicking on "Delete" isn't a final action.

EDIT: I think my (in hindsight poorly) chosen example may have overshadowed the intent of the question - What I'm asking is to help intuit some "non-conclusiveness" for a button that may seem conclusive and intimidating. Something like "this button does a scary thing, but don't worry because it will lead you to another chance." The first example that came to mind was "Delete" (of course buttons shouldn't do scary things, but sometimes their message can seem that way, and that's a design issue that should be corrected).

Thanks for all the advice!

I think the only way to warn users that a confirmation will follow, is to use a conventional symbol. Because a standard symbol for this purpose does not exist, you have to establish one in your application. You have to use the symbol consistently in all screens of your applications, so that users will create an implicit connection between the symbol and the warning message. Also, explicitly notify your users about the new symbol through e-mail or through a temporary help text in one or two frequently visited screens. The temporary help text must be removed after a few days.

The symbol that you will use must be obvious but not obtrusive and must blend with the rest of your design. You must use subtle cues like a thin light yellow rectangle, a warning icon or three dots (three dots are also used when there are additional options). 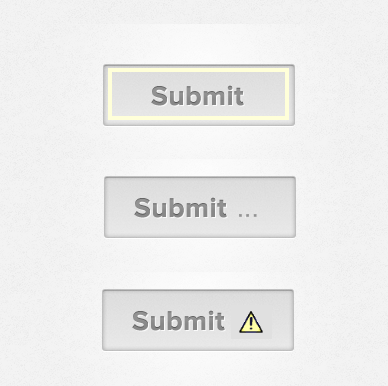 According to the very good reference by @EdPlunkett the trailing ellipsis for confirmations is a documented standard :

Use an ellipsis in the name of a button or menu item when the associated action:

Always displays an alert that warns the user of a potentially dangerous outcome and offers an alternative. For example, Restart, Shut Down, and Log Out all use an ellipsis because they always display an alert that asks the user for confirmation and allows the user to cancel the action. Note that Close does not have an ellipsis because it displays an alert only in certain circumstances (specifically, only when the document or file being closed has unsaved changes).

Also, I found this reference from Microsoft :

According to the above references, the other two options I recommended are invalid, the trailing ellipsis seems to be the most appropriate symbol. But I do not know how many users really know this convention, and I still believe it is important to communicate this to users explicitly somehow.

You can add Step Number to let them know that there are other steps ahead. I have attached a snapshot just for reference. 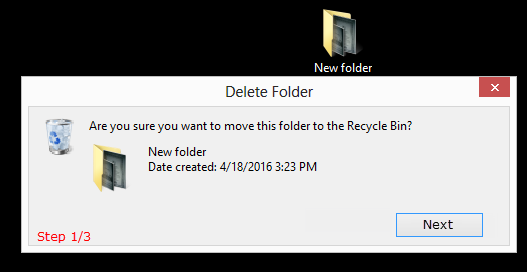 Delete is a destructive feature, so if you have not implemented an undo or trashcan feature in your solution, the extra "Are you sure" step is to ensure they really mean to do this, because it will be lost for ever.

I recommend you enhance this extra step to explain why you are making sure they really want to do this. You might even want to consider a "Don't show this next time" feature, because this extra step can really start to annoy people after a while.

Ideally you would implement and undo or trashcan feature, which would mean you won't need this extra step.

For the specific case of item deletion there's a widely implemented that works as a doublecheck, but in a more intuitive way. Windows has a recycle bin, gmail has a trash folder. When you throw things in a trashbin you can still pick them out and dust them off again. Although some systems have an automatic/periodic clean up moment.

So for a non-final deletion solution, name the option "move to trash".

If it is merely a final warning popup, ask yourself why you want to communicate that. Those popups intentionally serve as an extra step, to prevent accidents. Teaching people to just doubleclick will make it automatic, and that will make it a less effective safeguard.

Not the answer you're looking for? Browse other questions tagged forms gui-design delete or ask your own question.

88
What is the significance of the three dots "..." on menus and buttons and how to use them right?
23
Do shapes connote differing degrees of hazard?

42
Have I missed anything from my list of web form best practices?
4
What is the right way and time to signal validation problems to the user?
21
Color of destructive primary button
3
How obvious is it that an element that looks like a flick switch can be clicked?
1
What is the best way to indicate the user that the edit can also lead to delete?
2
Post Action Confirmation / Next Steps Page
2
Is Tap-n-Hold more intuitive way of asking confirmation in case of destructive action?
6
Nesting checkboxes inside a radio button: Is there a better way?
1
Action Sheets then Alert Box Delete Confirmation Issue (iOS)