I have a table with an accordion expander for viewing additional information. By default the data is presented in view mode with a button to click edit. I have received in-office feedback that it should be in edit mode once expanded. Here is a wireframe showing an expanded table row in view and edit modes: 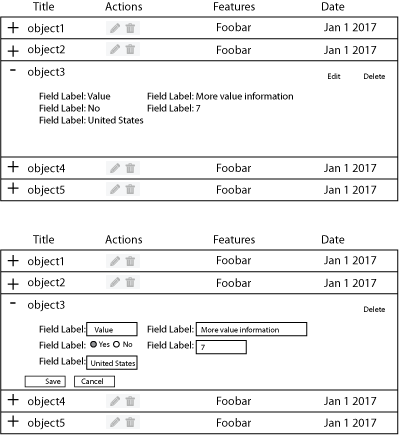 Does providing a view mode add extra burden to the user? For this example, expect the user to view 50% and Edit 50%.

The view mode is more esthetically pleasing so long as they are just expanded to get more info. To show in edit mode all the time appears a bit clunky. This may be form over function, but is the burden of function too great? Opinions welcome.

I'm a big believer in the Keep It Simple Stupid (KISS) principle. Assuming you have to keep the basic design (i.e. the table with accordion expander), one of the main things you have to consider is the workflow of your users.

I'm not entirely sure what you meant by this, but if you mean that half your users will be editing and half will only be viewing, OR if you mean that typically only half the fields will be edited and half won't be, then I guess from a workflow point of view things are evenly divided. If so, then I would leave it as is because the way you have it now minimises the risk of someone editing something by mistake.

However, one of the factors of a good user interface design is that your design doesn't behave in a way the majority of users don't expect it to. So, despite everything I've said above, if the clear majority of your users expect that expanding the selection would allow them to edit it, then you would have to seriously consider changing it.

Personally, if it was me, I would leave it as is, but I'm not one of the users.

Not the answer you're looking for? Browse other questions tagged inline-edit view or ask your own question.

16
Should I put view and edit on the same form?
5
Is it better to have an 'edit mode'?
4
Edit button or editable nodes?
1
Shifting a view into inline-edit mode VS. dedicated edit screen?
26
Inline editing vs Edit view
4
Prompt user to edit an inline-edit field
12
View vs Modify "mode"
8
Nested edit states. What to do when edits are save-able at local and global level?
3
Showing edit mode for messages