The information model of my application consists of a hierarchy of objects (one to many), each has its own specific attributes and inherited attributes. For each inherited attribute in an object, user should be able to specify that either it inherit its value from its parent or that he would like to specifically override it with its own value.

I have come through this Google Dev Tools view of CSS style hierarchies suggestion for a similar question which I have to say that, though seem rather technical, can suit my users which are very technical by themselves (their alternative up today was to configure it all through CLI). Yet, as suggested in the answer, it has to be adapted and cleaned.

I am looking for answers suggesting two alternatives:

To demonstrate the hierarchy I used Group and Member objects. Group can have zero or many members. Group attributes #1, #2 and #4 are relevant also for members. Each member inherits the values of the group attributes from its group (by default). However, user may override a configuration done in the group with its specific setting (value). For example, the member in the example, has chosen to override Group attribute #2. Member also has some member-only attributes depicted in Attribute set #2. 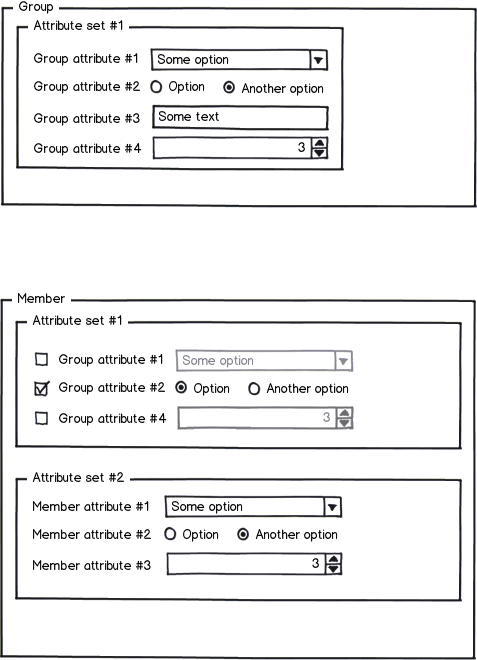 Browse other questions tagged hierarchy structure or ask your own question.

5
How best to present origin in a hierarchical settings structure