Khan Academy has a donation page. You can choose to give a Monthly or One-time donation. Hopper, a mascot for Khan Academy is behind the donation buttons: 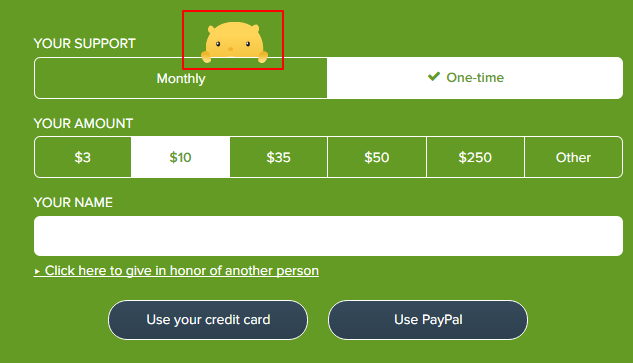 If you hover over Hopper when One-time donation is selected, he says the following: 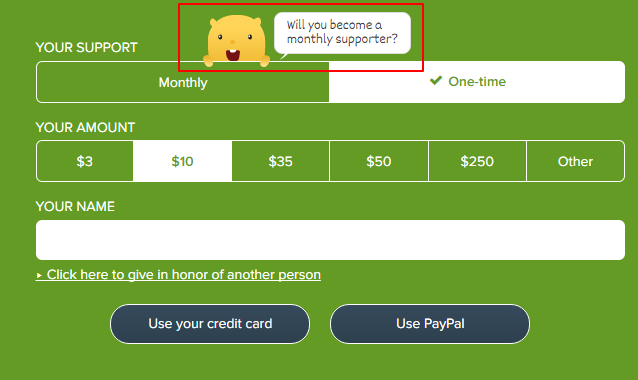 Once you select Monthly, Hopper does the following: 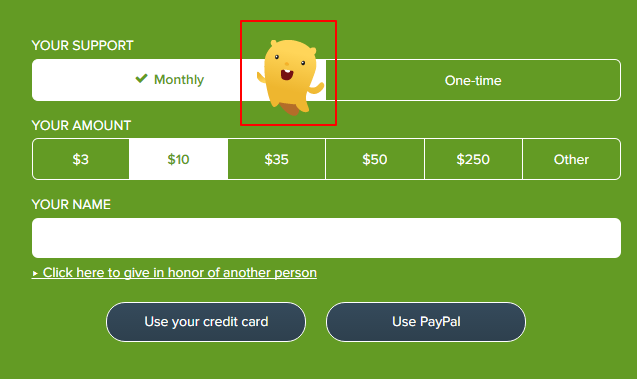 Okay, in a sense you're asking for an opinion, but I'll try to give you more than that by backing it up somewhat.

The research in this paper found that customers of Johnson City Power Board were more engaged with "Will Power" (the mascot) and more likely to be "talking about the mascot" than any of the other 'topics' on their Facebook page. Other topics included things like news stories, press releases, sponsorships, events, operations, and so on. Of course, this is talking about mascots in a social media context. However, the 24 page thesis is an interesting read on branding, mascots, etc. In its conclusion, it states:

There has also been a lot of research into the influence of food companies' brand mascots and entertainment companies' cartoon media characters on children's diet and health. So clearly, mascots have an impact on human behaviour in that age group.

The thing about Khan Academy, as I mentioned earlier, is that it's likely target audience are students, most of whom are young and probably still living at home. And of course, research has repeatedly shown that children have a significant influence on their parents purchasing decisions. In his article "Branding is no longer child's play!", published in The Journal of Consumer Marketing in 2004, Lindstrom argues:

“The BRANDchild study conducted by research institute Millward Brown among 2,000 kids aged eight to 14 across seven countries supported by data from the BrandZ study, including more than 15,000 kids of the same age across 14 countries, reveals that in up to 80 percent of all brand choices, tweens control the final decision…accounting for an astounding US$1.18 trillion per year.”

I can only imagine then that this influence also extends to the donations parents make and, since Khan Academy is an organisation that is actually helping their own child, they are probably more likely to make that donation. So much more so if a cute mascot like Hopper connects with their influencing student child.

Finally, let's not forget that tweens (aged 8-14) themselves control a significant amount of money and are also more likely to donate a buck or more if they connect with a character like Hopper.

Not the answer you're looking for? Browse other questions tagged user-behavior user-expectation payment or ask your own question.

7
Usage of mascot to increase user engagement and happiness

0
UX to choose month/day/time for reservation form
96
Why is Google using a (new) 2 step Gmail sign in process?
5
How to show that in Delivery time filters you can select one option
2
Auto advance to next question in a questionnaire on user response
1
What are the advantages of websites (eg:Gmail) not using a cursor:pointer for interactive elements?
2
Product filters - how to explain to the user if they are inclusive or exclusive
0
User flow with on-demand service platform
3
How to show better hierarchy for inter dependent fields in a table?