How to visually show hierarchical structure with inherited attributes

In my system I have projects which each belong to one group. Groups can have sub groups and those can have more projects etc.

I am trying to come up with a view for the group attribute management. The view should offer the following

So the question is: how to compose such view so that it hints to user which group attributes are available for attaching/detaching?

This is what I have now:

This is drafted with excel but the real solution will be used in web UI.

My suggestion now below. 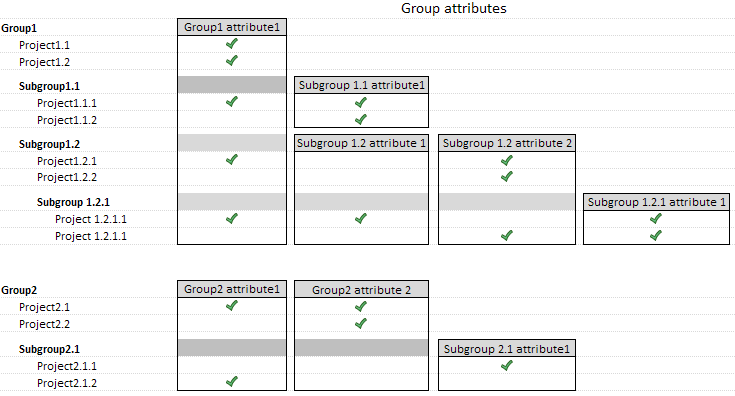 Borders added around group attributes to show the "visibility" of each attribute - i.e. for which projects it can be made active.

Cells not available for selection are grayed out (the group rows).

One could consider using some abbreviation for group attribute names to make the view more compact in case there are lots of items.

Not the answer you're looking for? Browse other questions tagged usability info-visualisation or ask your own question.

9
Representing a network of product dependencies as a diagram
1
Is it possible to create a different experience for both internal and end users viewing the same information?
0
What type of map will be suitable for marking an accurate address
2
Defining usability: Is there a clear terminology structure for different methods?
2
How to visually show aging account receivables?
1
Bulk import objects (csv files) into groups
2
VIsualizing a collapsed mid-level in a hierarchical structure
2
Is a table a good idea for navigation?
1
How to handle multiple data attributes with inconsistent timestamps