How to visualize progress in categorized data?

I want to visualize my progress in bouldering in a nice graph.

Of each color there are multiple problems (approx 10). The total number varies at is also difficult to count, so I don't know it. Also counting all the problems I have solved of a given color becomes tedious as well. So I count the problems solved if that number is small or the number not solved yet if that is small.

Using this data I want to visualize my progress over time.

Basically I want to visualize data where each data point consists of multiple tuples of the following kind for each point in time:

Note that there are multiple tuples at any given time. For example one might have all but 2 of the yellow problems solved and 3 green problems solved.

What would be a good way visualize this?

Sample Data (as asked for in the comments) Format: Day as integer; category; direction; value

Properties that I think would help

I'd expect the following properties of a solution:

These are not requirements, but just things I'd expect from a solution.

I am afraid that I still have a little bit of trouble understanding the data, so I will go through the process that I used to come up with a concept and hope it will either help you clarify the data or create something that you can use yourself.

If you can be more specific around the use of the data it will help me to understand and refine the initial concept. 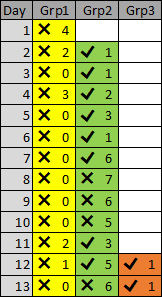 An update based on comments and feedback:

The only way I can see of putting the solved against the not solved is to split a row in half and put one higher and the other way lower like this: 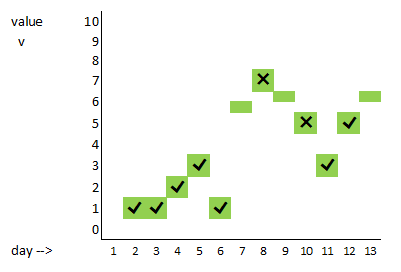 Not the answer you're looking for? Browse other questions tagged info-visualisation categorization timeline or ask your own question.

11
How do I represent null values in a line chart?
6
Visualizing version-controlled hierarchical data
4
How to visualize immediate and total search result counts
1
Visualization of proportions/ratio over time
2
How to display data behind a data point in a matrix?
5
Visualize popular routes/connections
2
Whats the best way to graph percentage data?
1
Progress visualization of a person's self-development?
1
Representing multi layered data in dashboard