Form with locked and unlocked controls

I've just inherited an application where there is a form.

It opens, in the unlocked state it is like 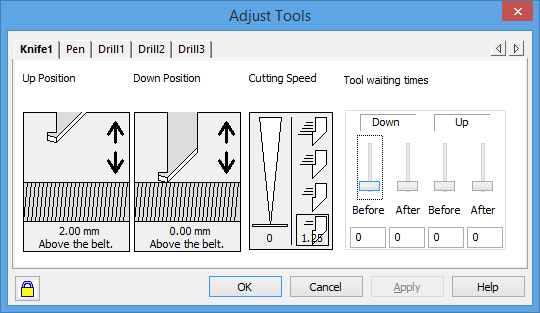 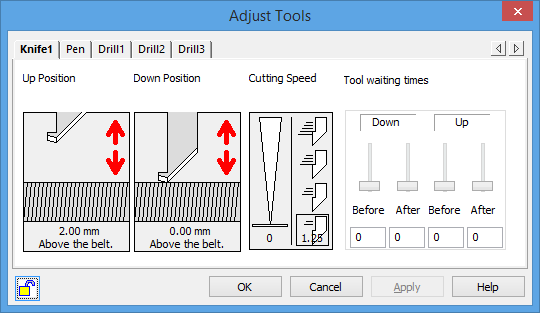 The arrows at Up Position and Down Position are active control areas which when clicked make the Knife drawing go Up and Down; this is also reflected in the text over the "Above the belt text".

The only thing that the padlock button locks are those arrows. They come red when inactive and do nothing.

The only tool types that will allow moving up and down are Knife and Pen. Will it be beneficial to put the locking control in the respective tab?

On the principle of "group related controls together", I would say yes, here, though the placement of the lock within the tab should be consistent. In its current position, the "Lock" icon suggests that it will lock the entire tab (or possibly the entire form).

(It is not clear to me why these controls in particular need to be lockable; if there is a reason for that then the UI should convey that reason.)

Is putting the arrows red the best solution to say that arrows functionality are not available?

The first problem here is that it is not at all clear that those arrows are interactive; they appear to be part of the illustration. The controls in your form are split between standard old-school Windows UI buttons-with-borders, and pictorial controls like these arrows and whatever's going on in the "cutting speed" section. Keep the illustrations if they are familiar to your users, but switch the interactive controls to standard UI buttons and sliders. And, in keeping with that metaphor, they should follow the ubiquitous convention of "dimmed means disabled".

The padlock button[...] you don't know where the drawing you see is the current state or the command that it will do when clicked

There'd be nothing wrong with adding supporting text (as, again, in OS X) but I'm not sure it's necessary. Changing those "Arrow" buttons from #1 to the standard "dimmed when disabled" will further reinforce this, since their dimmed state will also indicate the lock state.

Would it be better to change [the lock] to a checkbox

No; that would be much less clear.

As the only thing the padlock locks are the arrows, wouldn't it be better they were nearer the arrows?

Generally yes, though you would of course need to rearrange that portion of the control surface to make room for it rather than simply blocking some of the arrows as you suggest. You'd also need to take care not to too closely associate the padlock with one set of the arrows but not the other, as that would be equally misleading.

One quick-and-dirty possibility (I've done a hack job of it here, but note the "well" grouping the padlock with both images, similar to the well grouping the slider controls at right): 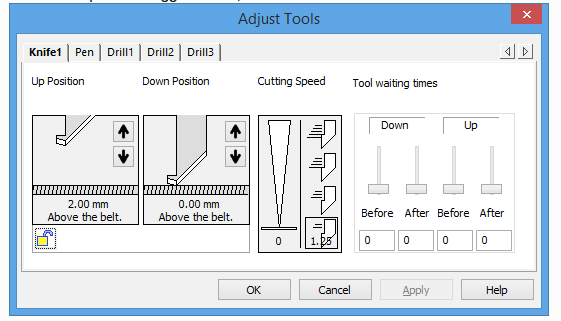 the Lock button does not lock anything. What it really does is to change the step of how much will move each time an arrow is pressed!

Well, that's just plain a bug. Some developer who didn't care very much about usability was in a hurry, one assumes.

(There are other, obvious, layout and usability problems in this form which you haven't mentioned -- just to hit a highlight or two the gap between the tabs and the controls is far too large, and the text overlap in the center block is... not good. I have no idea what the imagery under "cutting speed" is supposed to represent -- if that triangle thing on the left is supposed to be a slider, please change it to a normal form control; the graphics aren't helping communicate here at all.)

Not the answer you're looking for? Browse other questions tagged forms interaction-design interface toggle or ask your own question.

12
How to best represent a ToggleButton (representing on/off) with the ability to be locked
9
Assume success and show response immediately or wait for a response from the server?
11
Indeterminate state for toggle buttons?
3
What UI is appropriate for banning and unbanning a record?
8
How should a multi-state toggle slider with more than two states be implemented?
2
How to make a switch between a form and a text editor?
1
Page Life cycle, dealing with dependant controls
4
Toggle Switch with Delayed State Change
2
Alternative to "click cycle" without cumbersome UI?