We are translating our application to Spanish. This has caused some text to auto hyphenate on one of the buttons. I know the current implementation isn't ideal,but i'm not sure what the best solution is. Do I:

Some of these options make the experience different from when viewing the application in English.

Have you thought about changing the name of the (English) label. You could change the label to 'silent', 'mute', 'off' etc. This should translate well and leave you with space for the icon without dramatically increasing the depth of the button. The icon will already give the user a good idea about the function the button serves.

You can try one of the following options :

I'm working with an application that supports five languages, incl. Spanish and German (notorious for long words), here are some best practices we follow to accommodate all languages.

When adding your first language after the primary, this is an upfront cost but it will make your life so much easier down the road. If you start introducing special cases for a certain language you will have to go back to all these points when adding your next language and update them for the new language.

I would not shrink the font size, on small devices that might get so small that it's hard to read and it changes the visual experience. In my opinion it's not a long term solution.

My answer is based on the Translation app of google that can translate signs in real time.

They adjust the translated text according to the sign it's written on. 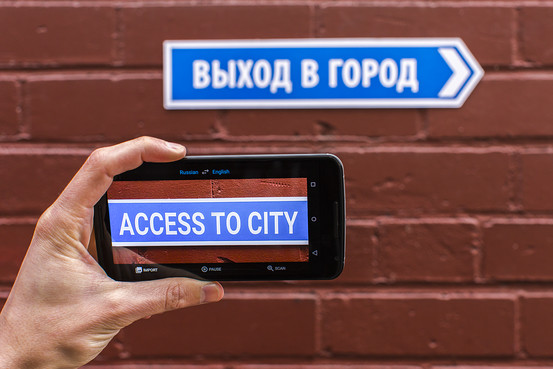 7
exclusive select in a table: radio button, rowclick, text only, text and icon, or icon?
50
Should I provide feedback from a save button?
2
Buttons for showing None, Some or All of list
8
Should a button behave differently when pressed a second time?
1
Where to put a search button with auto-complete suggestions (usually at the top of the screen) to a more suitable location for mobile platforms
44
Do disabled buttons still need to be contrast compliant for accessibility?
2
Circular context menu on hover
4
Best way to provide add/remove functions for a matrix's rows and columns in a smartphone app
0
“Undo Changes” & “Refresh”