How do I calibrate the gamification system in my webapp?

I'm planning on writing a web app that let's users 'explore' fictional universes by plotting the connections between films based on who played each character (if they played the same character in two films, wet assume they're related)

Obviously, this system is not perfect, and needs human input in the form of corrections. I intend to encourage these by gamifying the system, and award points for film universes discovered, corrections made etc. I'm using the stackexchange network as a benchmark but I feel that the content is quite different so using that to influence how I calibrate my system, which will ultimately influence the design of the system.

After doing a small amount of reading though I'm still not sure how to calibrate my system.

Good games are well calibrated - they require effort to pass the next level. According to the Flow Theory - when the game is too easy it is boring. When it is too hard it is scary.The complexity of good game grows while player builds new abilities (both personal and connected with his/her avatar in the game).

How do I achieve the above?

That concept was pioneered by Mihaly Csikszentmihaly.

If you google his name, you'll find a ton of resources discussing the concept of "flow".

And here's his famous diagram about Flow: 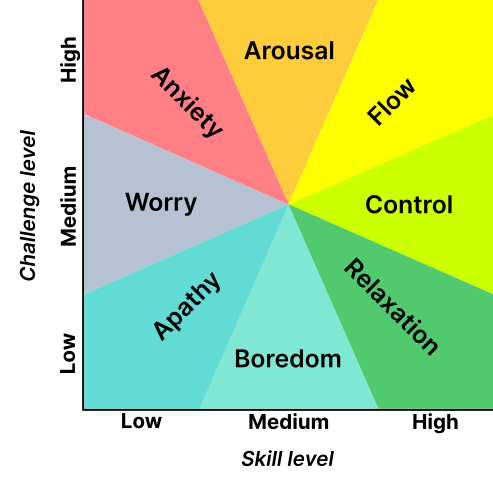 On how to Calibrate Your System:

Not the answer you're looking for? Browse other questions tagged gamification or ask your own question.