How to avoid opening a dialog from within a dialog?

I'm designing a mobile modal dialog which will prompt users to activate a critical app feature related to the security of their data. The dialog should include two action:

If users will choose 'DON'T SHOW AGAIN', I'd like to add a short comment that would explain how the feature could be activated in the future. Obviously, I'd like to avoid opening another dialog for the purpose of displaying that comment. One straight-forward solution is to add a 'DON'T SHOW AGAIN' checkbox to the body of the dialog, which when checked, will display a comment underneath the checkbox with instructions for activating the feature. In this case, the modal dialog actions will be:

What are your thoughts about such solution? Is it a good practice to have a checkbox within a modal dialog?

(Screenshot of a relatively similar use case attached for reference). 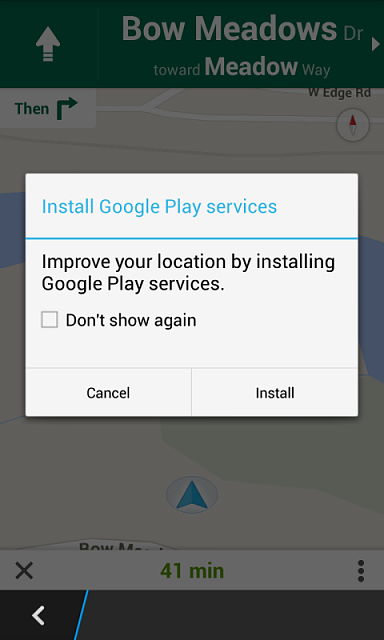 I would opt for your second option, as it is a clear Yes/No (Activate/Cancel) option. I don't think that the 'Don't show me again' option is as clear as you might expect to the user if they are only faced with that and 'Activate'.

Go for the layout that uses a checkbox and then expands to reveal how to turn that back on again.

It's a typical convention, and I wouldn't worry about disabling the option to 'Activate', even if by activating they won't be shown the message again anyway. This follows expected behaviour, and avoids confusion as often the 'Don't show me again' relates to both options.

Not the answer you're looking for? Browse other questions tagged mobile-application checkboxes modal-windows or ask your own question.

2
Is there a better metaphor for a single-use checkbox?
1
multi select option in iOS app - how to design the multi select button
3
Add Another Item - best pattern for modals
0
Desktop: Placing warning labels inside a Save dialog vs. popping-up a new window?
3
save/cancel dialog from pressing cancel
1
Threaded/nested mobile comment section
1
Disabling a modal dialog while waiting for the server
1
Selecting non-working days/holidays in settings - what would be the best approach?
0
Material Design | Dialoge from floating action button - how to do it? Is it even a good idea?
2
Settings check box functionality