Our app has multiple products that you can opt into, let's pretend it's named "Xanadont". Each product (or module) has configurable settings plus the main app has settings. There's a settings view called "Modules". The left column lists each module. The right column is the details view of the settings per the selected module.

The question is what to name the main settings list entry? We have two camps: 1 - label it "General", 2 - label it "Xanadont" (the app's name). Here's a rough mockup. 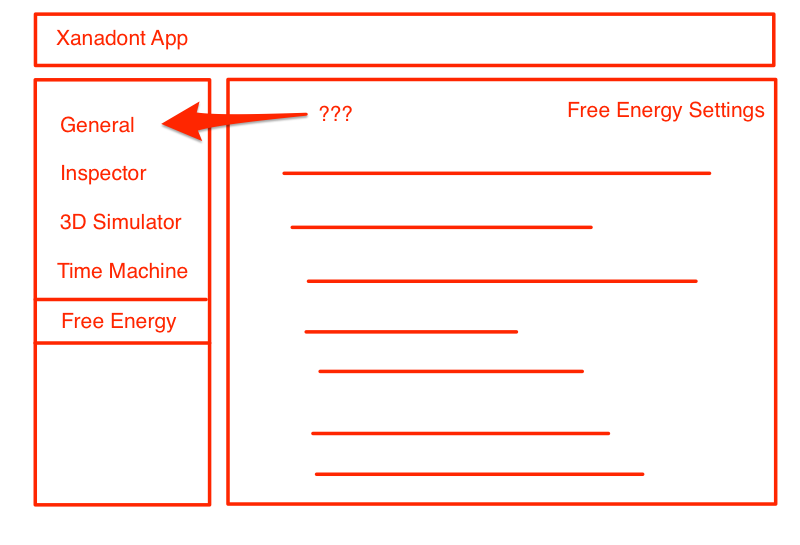 Edit - the "main" settings area can have settings that affect the modules, but other settings may not. An example would be Date / Time and number formatting.

It may already be too late for this, but I would manage your settings structure differently altogether. That is, make the various module settings only available to users when they're within the various modules, rather than at some top level.

At the top level you could just label settings as "Settings" and then within each of the modules you could denote the internal settings with a recognisable icon.

But, assuming that isn't possible...

I think you most definitely don't name it "Xanadont" or whatever the app is called. The only way you'd get away with that would be to call it something like "Xanadont Settings", but that probably isn't ideal.

The main reason for not just using the App name is that it's likely to lead to confusion. Even going by your question, one side is saying that using 'General' would be "less confusing", while the opposing view is that using the App's name means that "users won't be confused".

'General' actually sounds like a fairly good option (even Apple uses it within their iOS settings). While some may argue that "General" is cliché, that's actually not a bad thing when it comes to user expectations and the overall user experience. So I would opt for General.

But there are other options. Here's a few (not in any particular order):

1
Should sub menus / sub navigation naming be consistent with upper menu
2
"Property" based main menu
4
Should I hide settings behind a settings menu or allow the user to edit inline?
0
Register/Login/Sign in pages with or without main menu?
1
GUI Settings Menu
0
Linking a sub-menu item to another main menu item
2
Right Menus vs Main Menu Entries
0
Global Settings Menu VS Context Settings Menu
1
Web App Main Menu Should Contain All Commands