(I'm not a UX designer , I'm only a user).I might be the only one , but I think that I'm the weird one , because I just can't see how UI component are being released without further thinking :

Take for example , the sorting arrow : 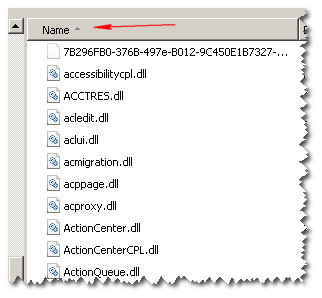 The arrow says it is sorted ascending , but the arrow points to top. I know that it shows bottom to top which is their way of showing A->Z. but the arrow doesn't points to the direction of data flow.

This makes the user perform some brain activity to translate buttom to top as ascending order.

I mean , What if the arrow was to the other direction ( V , not ^) , this way it will be both visually correct and flowy correct.

Honestly , I don't understand how Apple allowed this to happen.

Fact : Airplane mode is off. But the circle is pushed to the place where "1" is found , so one can treat this as "it's on 1 which is on. if you want to shut the mode off , go to the zero location , which is right". What is going on here? This is very non-intuitive !

Not to mention that they added green background when I set it to the right, which completely makes you to cancel your intuitive response.

Actually, I pretty much disagree, at least with the examples you've given.

The little sorting arrow is basically showing that the 'lower' value is at the top and the larger value is at the bottom (think: 1..2..3..4..5..and so on). If you click it, then it sorts the other way around. The point is that the lowest values in alphanumeric order (e.g. '1' is before '2' and 'a' is before 'b') are at the pointier smaller end and the higher values at the bigger end.

As for the Airplane Mode example, I've checked all my iOS devices and none of them actually have the circle (but I digress). Regardless, green is often used for 'on' or 'go' so it only makes sense that the green is indicating that Airplane Mode is on etc.

All that said, I do think that many UI elements are implemented in a counter-intuitive way. In some cases, the 'double negative' or 'false positive' approaches are quite confusing.

Not the answer you're looking for? Browse other questions tagged interaction-design ux-designer product-design ux-integration or ask your own question.

491
Should a toggle button show its current state or the state to which it will change?

4
Top list of the most down-voted items. How to avoid user confusion?
1
Ratio or pixel based design on native iOS
1
What do you call this "pushed in area" border effect?
4
Intuitive All On/Off GUI?
2
Indicating direction of an object using a basic string
1
Most intuitive accordion action icon
2
Why do few laptops have their Home/Page Up/Page Down/End keys in a column on the right?
5
Are real objects more intuitive than plain UI elements in VR?
1
Does Usability Tests and Product Experience Maps go Under Discovery or Define Stage?