Is my gender selection sexist?

Basically, instead of a simple dropdown gender selection I wanted to go with something a bit more unique.

I am using a material-design layout over my entire site, although I feel as if my gender selection may be a little sexist in the way that it stereotypes females having long hair and males with short (or bald) hair. 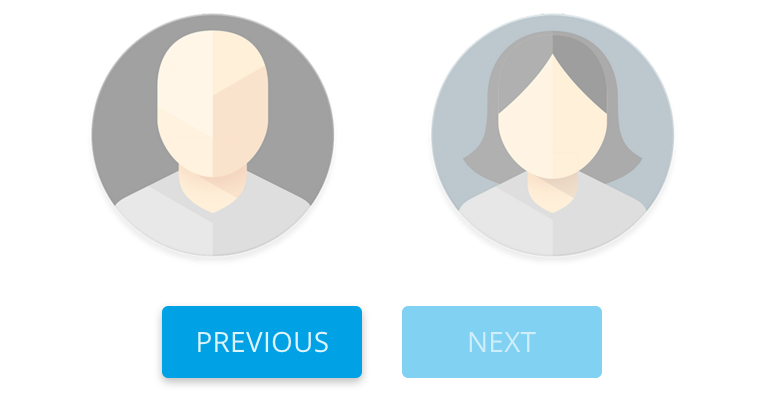 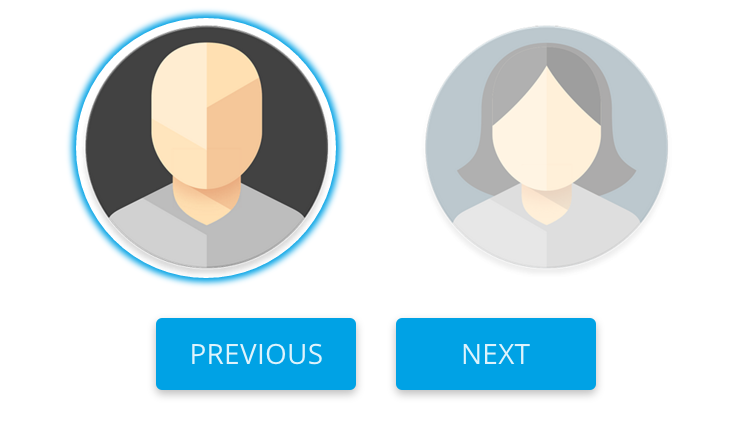 After some looking around, I found that when creating an account on Facebook, they only offer two options - Male or Female. They also don't make it very easy to change your gender once you have an account. Instead of changing it within your account settings, you have to actually visit your own profile, click on "About" then go to the "Contact and Basic Info" tab. Once there, you can edit your gender, and Facebook provide the options of - Male, Female or Custom. 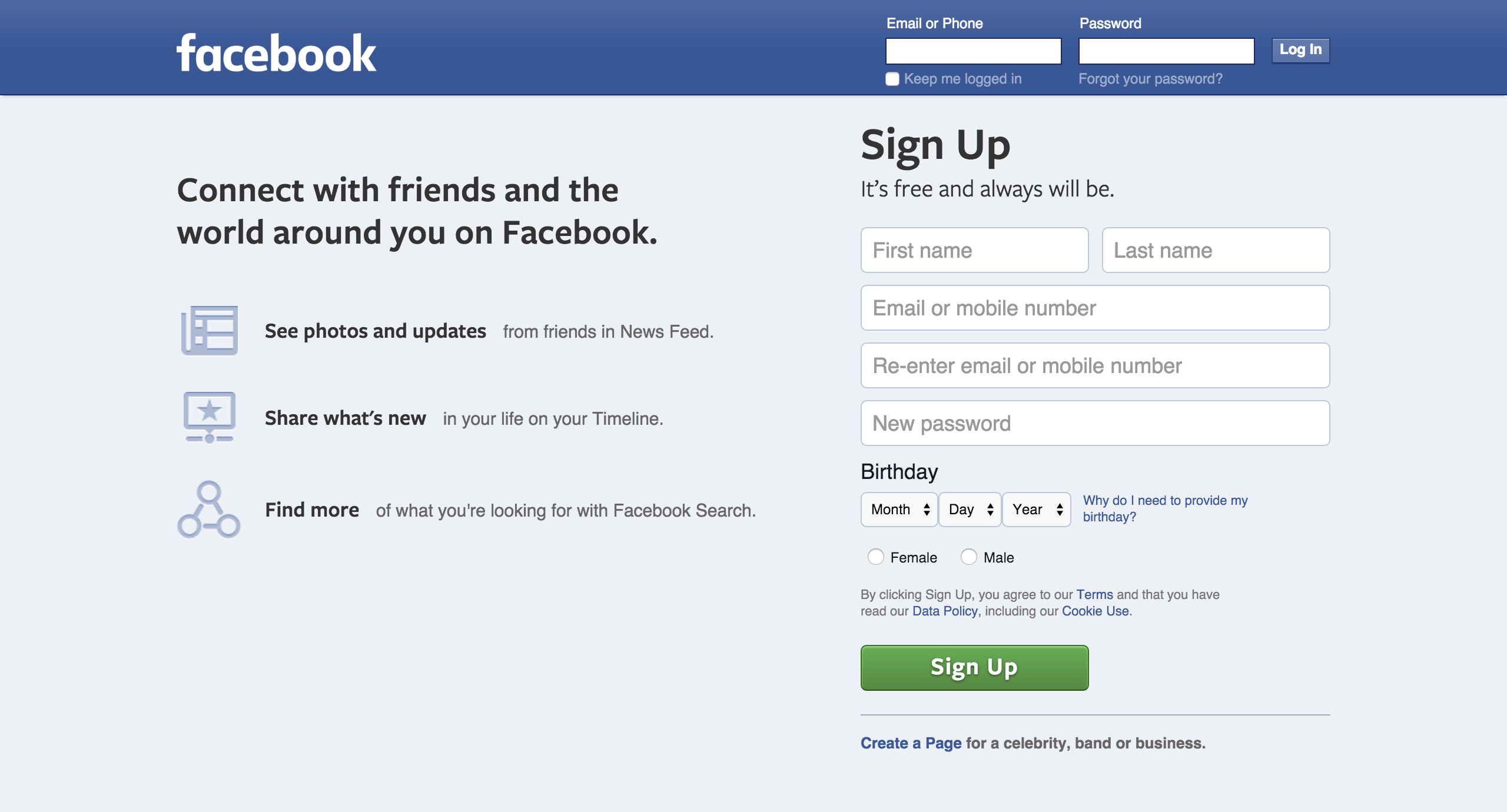 Thank you for asking this question. Short answer: yes.

Not all women have a hairstyle like that, and neither do all men. And not everyone is white, either, so it is racist (or at the very least ethnocentric) too.

Compare the gender options offered by Facebook, which were based on actual research with the LGBTQIA community.

See also the other related questions about gender options How can I deal with diverse gender identities in user profiles? and Alternative gender selection radio buttons and the gender tag in general.

While this isn't necessarily suitable for a friendly social network styled website, NHS Digital, the organisation responsible for providing IT services, software, etc. for healthcare in the UK, have some guidelines for gender values.

As far as UK healthcare systems are concerned, there must be 5 options, no more and no less, to cover everyone's different situations:

Male, Female, Other Specific, Not Known, Not Specified

When you collect any information during signup, it's really important that the user understands why. I don't know why you need to collect gender information, but if you are limiting yourself to this binary, it's not so much about being sexist but about how someone who does not fit in to that binary would react.

If I identify as non-binary, at this stage of onboarding I would be thinking twice about continuing. You may see this as a simple UI pattern, but in reality it is likely that this is representative of the structure of your app - which at this point does not seem to provide options for non-binary identifying users.

Whether it's sexist is not really the issue. Whether you are comfortable about excluding an entire demographic of people from using your site is more important. I know I certainly would not be.

I'm unsure if an illustration like that is the best method of portraying a gender. I know plenty of women who look more like the first icon than the second, and vice-versa. It took me a moment to catch which was which myself. If the question was "are you bald?" my reaction would be fairly different.

Maybe the "men’s" and "women’s" icons 🚻 found on restroom doors would work, or the traditional scientific symbols ♂ (also Mars) and ♀ (also Venus).

Also, depending on your demographic, I would suggest adding a third option. A label like "other" isn't always a great way to take care of this because "other" can serve as a dismissal. I would suggest two buttons (male, female) and then a drop-down for "more options". People who identify as another gender are a small demographic, but they still own and operate computers, so just from a marketing perspective (obviously there are moral reasons as well) it makes no sense to exclude them.

Ultimately, I would take a look at using gender symbols and drop the illustrations you have currently.

Actually, the thing that is sexist is “gender selection.” It is sexist to ask for the person’s gender at all. Why do you even need to do that? The answer to that question will be sexist by definition. You are trying to separate men from women and the result of that will almost certainly be to treat the women as second-class citizens. Even the most benign version of your sexism is going to be assuming the women want fashion tips while the men want sports scores. What you should actually do is just have one kind of person called “person” and then ask the user if they are more interested in fashion tips or sports scores or both? Ask them to choose from 10 colors for their profile page rather than assigning women pink and men blue or similar. Let people sort themselves into groupings by their own interests, rather than you making sexist assumptions. You can’t make those assumptions because we don’t have strict gender roles. Men bake and women watch football and non- gender-binary people work on cars. And you can rotate the previous sentence around like a carousel and it will always still be true. So the gender information is essentially useless.

So the fact that you started out with a sexist design decision to collect the person’s gender is what leads then to sexist stereotypical icons of a bald/bearded guy and long-haired girl, and then leads to dealing with other gender identities, and you are down a rabbit hole. What Facebook did with 52 (or whatever) gender identities was well-meaning, but what they really should have done was stop asking about gender in the initial profile step at all. Let that be something that people declare about themselves optionally as they customize their profiles. Instead of “male/female” in the initial profile creation, show a list of 10 personal preference questions that sort people into marketing group A/B/C/D/E/F based on their own preferences. That not only removes the sexism, it gives you more accuracy, and it gives you more granularity because you have 6 marketing groups instead of two. Or use any number you like.

In short, if you want to stop being sexist, don’t separate people by gender, rather let them sort themselves into non-sexist groups based on their own self-declared interests and characteristics.

I’m pretty sure that Twitter is an example of doing this right. They don’t ask your gender and they have one gender-neutral “egg” icon that represents every user until they customize it with a photo of their own choosing. Then they market to you based on your tweets. If you tweet about hockey they will market sports to you, no matter what your gender. If you tweet about lipstick they will market makeup to you, no matter what your gender. That is non-sexist.

This question would have offended me (a cis male) starting at four years old, because it is HAIR-IST, and of course, yes, sexist.

It's offensive to people who don't have an over-identify short hair with male and long hair with female.

And yes, I'm quite serious. As a cis male who has often let his hair grow out a bit, being treated badly by people who over-associate hair length with gender is a real thing. This UI makes me angry and think whoever presents it is insensitive and as a user I would tend to at least become annoyed, and possibly quit or click the long hair icon just to mess with the site, and/or rant to your QA department or make fun of your company on public web forums.

Of course its not. It's a stereotype at most, and stereotypes exist mostly because they are common traits.

Yes, not all women have long hair, but your (may I add, quite nice looking) design isn't saying "do you have long hair?", it's not saying "are you a stereotypical white woman?", and of course not all men have short hair or are bald (although it's unlikely to see men kicking up a fuss about this - just saying). All it's saying is "this is an image that shows the common representation of a man/woman, please choose which one you are"

Not the answer you're looking for? Browse other questions tagged website-design interaction-design user-behavior icons gender or ask your own question.

57
How can I deal with diverse gender identities in user profiles?
4
Alternative gender selection radio buttons

9
Gender considerations in web usage
55
Default gender, "Male" or "Female"
3
Does gender affect the results of a usability test?
28
Is usability gender specific?
4
Alternative gender selection radio buttons
16
False identification of gender on website registration
13
What to use for "other" or "unknown" gender?
13
Using genders in physiologically oriented UCD
3
How to ask about biological gender
1
Personal Details Form - Gender Options