I'm designing a web application where a user needs to add more then 15 football players in a list. For each player user needs to enter values in 8 different fields in each row. It is usually about 50% of all players with no values for any of the fields.

The columns (will be replaced by icons) are:

My questions are this:

What is the best way for user to enter a value in my case? Keyboard, numeric-stepper...?

How to mark for users that they need to enter a number of goals/assists and not a minute when a goal is scored what is usually users first assumption?

Some other suggestions for design?

I think you should be structuring your data better for inputting. Firstly you're mixing data that doesn't change over the season (number, name) with data that changes every game.

So firstly I'd split those two creating the team first, and further for the team categories keeper, defender etc is more common than just keeper or not. 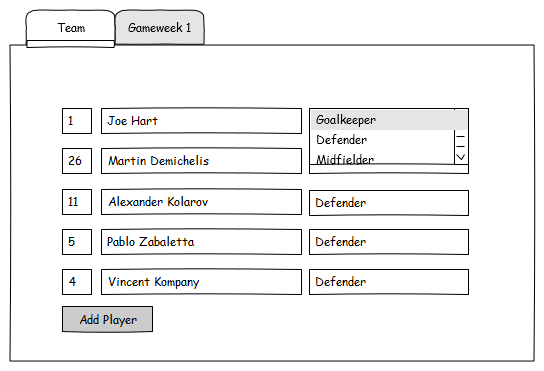 As a first draft of the en-masse number inputting - you can simply put labels over the top to indicate Total vs Mins and widen the mins inputs. 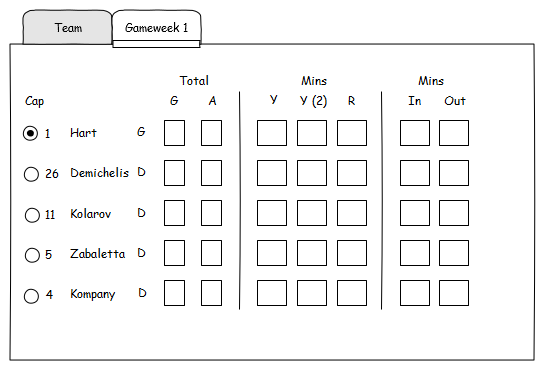 However going further, you might want to break out the input even more to have specialised inputs for them, e.g. for the Goals / Assists, you just need a simple toggle to indicate the number of goals / assists which should allow a fairly efficient input. 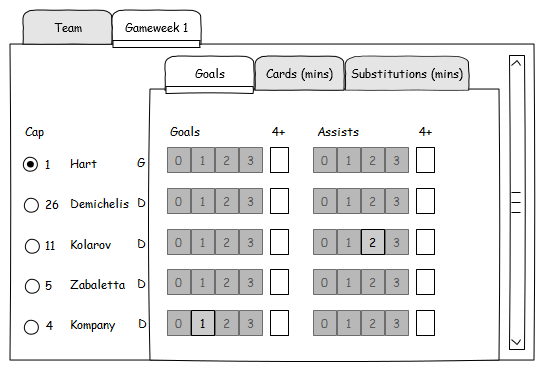 Then for Cards / Substitutions, it depends on whether you people want to input the data one player at a time or all the cards at once and then all the substitutions at once. If you want by player - then just put them all on one tab - then users can tab along the lines. If you want be card / substitution then put them in separate tabs.

There are a lot of different considerations involved when you are talking about the 'best way' for a user to enter a value, especially when you have many fields and many line items to enter. So rather than to provide an answer, here are some factors that you should take into consideration:

In order to allow data to be entered quickly, I would recommend allowing keyboard input, much like an Excel spreadsheet. Pressing enter or tab should advance to the next box to reduce the need for the user to switch between keyboard and mouse. I would however recommended including up/down buttons in the "goals" and "assists" boxes, to make it easy to change values once they have been entered.

As to the second part of your question, having a default value in the box would help, as would adding the word "count" or "number" to either the input box or the column.

Not the answer you're looking for? Browse other questions tagged gui-design lists input input-fields or ask your own question.

15
Time (duration) entry in webapp - pros/cons of various designs
1
Input fields with different sizes
2
Best way to input a list of emails
4
Can not reorganize large number of controls on a form , in a visually appealing and efficient way
2
Best design for input of solely negative numbers via numeric keypad
2
How to record multiple goals in score-keeping app?
0
Best practice for numeric list within a card on mobile
2
Best practice for input fields on mobile
0
Empty input fields and functional design
0
What layout to choose for input fields with units?