Do you know any mobile alternative to sliders?

I'm looking for alternative solutions to a slider. What I need is something that allows users to easily compare a price based on the variation of a given variable. For example: I set numbers of hours I turn on my AC system and I can view how much I will spend for the next bill and how many kw/h I will consume. I'd like something that doesn't require many interaction (ex. dropdown to select range values).

Do you have any idea?

A spinner is (one of?) the most common input method. 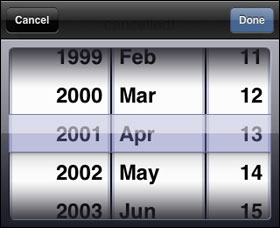 It's essentially a really big slider where you don't slide your point, but you slide the underlying numberline.

You could take the same mechanics but make them horizontal instead.

Which builds off of the spinner metaphor, but aligns it more with natural swiping direction, the idea of a slider, and real-world items like rulers and tape measures.

Not sure why you don’t want to use a slider. Is it because you have two range values?

If you have two range values, you can use an x-y slider. A square with a pip in it that the user can drag in both x and y directions within the square. The result changes in real-time to reflect the position of the pip. One axis could be usage hours and the other could be temperature setting degrees in your example.

If only one range value, that is exactly what a regular slider is for, on any platform. For touch, you just make it bigger so it can be used with a finger instead of mouse cursor.

If you don't want a slider, then a mobile-friendly solution is to ahve "+" and "-" buttons next to a read-only value for the hours. something like this:

Not the answer you're looking for? Browse other questions tagged mobile interaction-design sliders comparison or ask your own question.

46
Better way for users to select a date range
0
Numeric input - alternatives to slider / text field for mobile game?
2
Do you know any good source for human-robot interactions?
4
How to show range sliders on mobile
3
What sort of control should I use instead of a knob?
13
Multi-selection dropdown list implementation best practice
4
Need a pattern to capture multiple data sizes
7
Displaying and/or searching across thousands of contacts?
6
Dials vs. Sliders: When and how to use?