Should searching a table include hidden columns?

I have a table accompanied by a search component. The table is filtering items upon typing according to the following rule:

Now, the table is allowing users to choose if a column is visible or not, so he can dismiss (hide) columns that he finds useless.

The question is, should the filter also take in account properties which their corresponding column is hidden?

Check the example below:

Now, when the Nickname column is hidden, should the table show the relevant item (4) or not (3)? 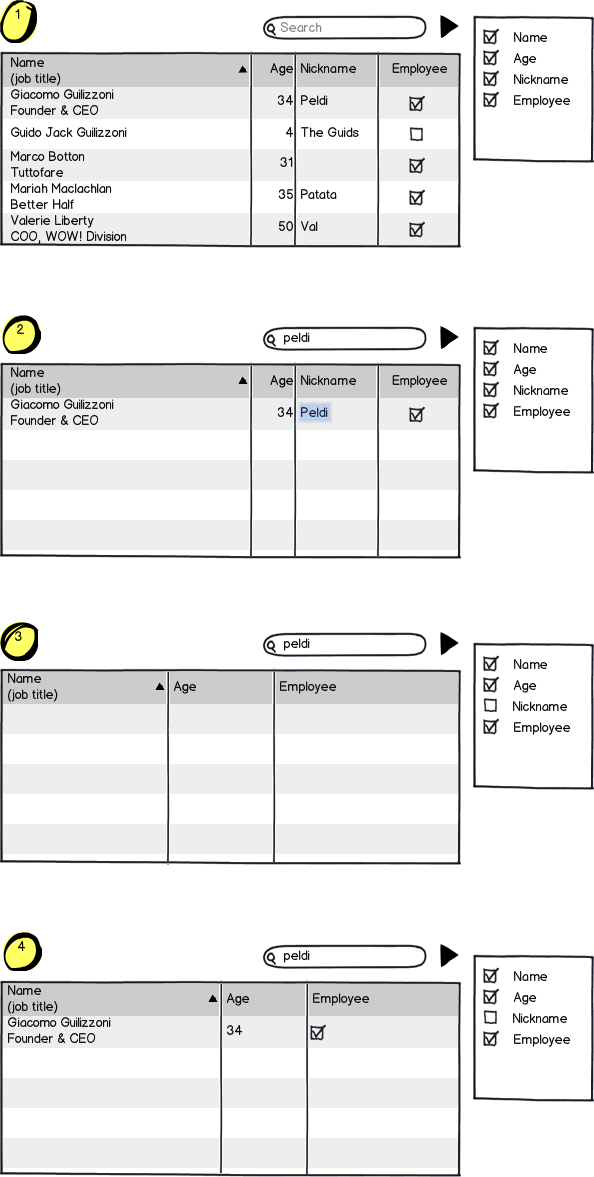 There's a possible solution without falling into this dilemma:
Give users the choice, just by adding a checkbox below the search/filter input which specifies "Search in hidden columns too" or some similar text.

If for some reason that's not enough I'd choose 4 (show results even if the column is hidden).

If you want to offer a more specific search it will help to:

I choose (4) at first but after some careful analysis, I think (3) would fit your design better. The reason being that your search itself is already a filtering mechanism (keywords). It doesn't make sense to do further filtering on your results by hiding/showing relevant boxes. Also when I choose to hide a column, I am explicitly indicating that I'm not interested in whatever result that is shown in that particular column.

Just a suggestion, perhaps you could rearrange your design by putting the search on top of the show/hide box. Change the search label to "Search In.." so user has the options to search in one or more of the columns. 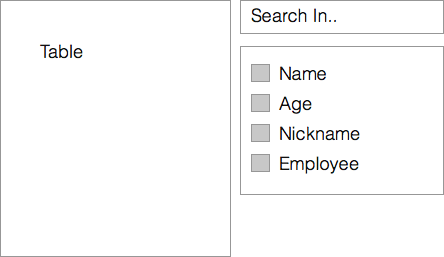 So it boils down to whether the search is on the data or just the current view of the data?

I'd personally go for 4. Sometime columns are hidden just because of space restriction rather than lack of interest, though obviously the user tends to keep the columns they are most interested in, however as rewobs said often a user will forget what they can't see any more.

So option 4, but sort the returned results by whether the match was in a visible column or not. Thus you can split the results into two parts, the second perhaps being subtitled "you may also be interested in" and specify the field which caused the match for each result (this hinges on you getting that level of feedback from the search engine or being able to deduce it after the results are returned)

There's also the issue that the search seems set up for text fields only, how would you search for employee yes/no whether that column's visible or not, or what about an age (it would seem to be exact matches only, or typing '4' would return everyone who's 24,34,40-49,54,64, etc)

As adomsoh suggested the column is relevant to you as a user or it is not relevant. Hiding a column is saying "I don't care about this column". To then perform a search on it is inconsistent and confusing. Do you care about it or not?

It's confusing because there is nothing visually to correlate between your search query and your results. It can get even more confusing in cases where what you've searched for is found in visible columns for some rows and hidden columns in others (e.g. someone's name has "Peldi" in it and someone else's hidden nickname has "Peldi" in it). It will look like the search is broken. I've searched for "Peldi" and it's showing me rows that don't have Peldi in them.

Not the answer you're looking for? Browse other questions tagged search tables filter or ask your own question.

2
is it a tree or table?
5
Data table with no data rows - show, or hide and display alt content
0
When should I hide preview?
2
Admin table with many rows, init state?
5
Does it make sense to put search result filters on the left in a table in which each column is filterable?
2
How to show relationship between columns of 2 tables
22
Where should a newly added item go in table?
7
How to handle filtering on table columns?