Indicating direction of an object using a basic string

I am trying to indicate the direction (left or right) of an object relative to a fixed point, which is itself located relative to a standard center, using simple text.

This direction information is important, as it determines which of two otherwise identical locations is indicated. The same position may be presented graphically, but not necessarily at the same time as its written form.

Basically, I am trying to represent a horizontal point in the following form:

(yl being Yard Line, and the 50 yl being Center)

I think I have a good general format, but I'm concerned that it might not be easily recognizable in a quick glance, what with the "left of the right" going on there...

I have come up with a few options to remedy this situation:

The first option would be simple enough, but I'd rather not use that if I can avoid it, for reasons listed above.

I have searched Unicode docs and those of various fonts in search of a character to use for this purpose. I am particularly fond of the 3D TOP-LIGHTED RIGHTWARDS ARROWHEAD (➢), but I have yet to find a viable leftwards equivalent. It's a simple matter to create and insert a rotated version of the character myself, but this leads to a host of other issues, not the least of which is that of performance. I'd rather not have to pass around a complex attributed string, and re-insert my rotated glyph image every time I pass move the string elsewhere. And where should I insert the arrow? To the right or left of the line number?

The third option is one I have seen used in a few places. Side 1 would be left of the 50, and side 2 is right, from the stands' perspective. This number would be subscripted after the line number.

Any advice on this point would be appreciated. How would I best convey this information without confusing my users?

I am imagining that the OP means that the marching will be described as being at the 45YL but obviously wants to provide instructions for each individual without creating a very large set of images. The better solution would be to use sprites and programmatically combine them together to create a "visual map" which truly be infitely better than using text.

Assumes at the very least that three lines of ASCII text are allowed. Done from marchers perspective. Two examples formatted in an image as Stack Exchange formatting capabilities are limited especially for code blocks necessary(?) for ASCII art. 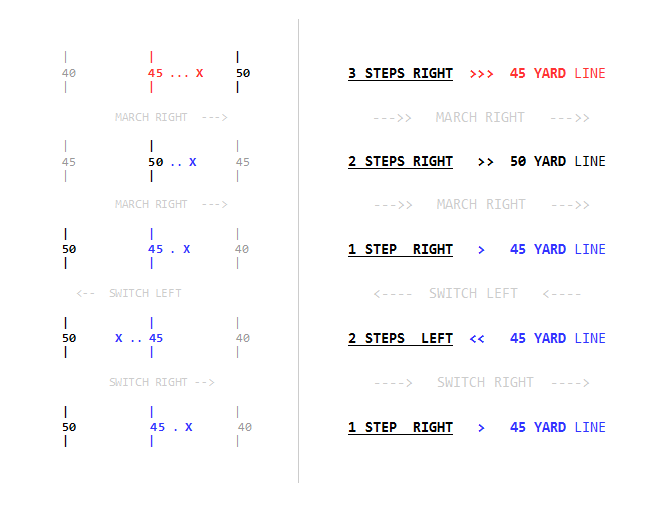 Originally I thought they would work well both together on same page but I think they work better separately. Best shown by placing hand over one side of center line eg the right side | left side. There are a large number of subtlies in the formatting which I will point out if this is even close to what OP is looking for.

Not the answer you're looking for? Browse other questions tagged usability interaction-design layout or ask your own question.

5
Flow of Dynamic Grid
6
How to properly layout multiple interactive controls using best UX pattern?
4
Applying the Windows UX Design Guidelines for Layout and UI Design consistently
3
big form VS steps/wizard
17
The design and implementation of the purely theoretical "self destruct" button
1
Guidelines for text-free filter?
1
Laying out Dynamic Objects: Guidelines?
2
Better UX for indicating the relative costs of many reclassifications
8
Direct users to use a physical button
2
Is filling the center-area of a GUI with several forms a good practice?