My site has a multilingual audience. The site (WatStory) is a writing/ blogging and reading community and supports 3 languages (English, Hindi, Bengali) right now. Content is largely user generated.

I am offering a "Change Language" button in the top bar which can be used by the users.

If "non-logged" user selects a language from this option, the site copy/ menus are changed to user chosen language and only content/posts that have been originally created in that language and associated tags are shown.The user can read the posts created in selected language.

If the user logs in for the first time, the language defaults to English even if user was using site in some other language before login (Think this is okay as users know English). (Seen Facebook do the same as site viewing language initially before login may be different than user setting language)

Post login user can use the same "Change Language" option in the top bar to select the language to write or read in. The next time user logs in the language defaults to the language they were using at time of last logout.

I am segregating the user generated content across languages and content is not being translated due to the kind of content. There is no separate option for user to specify language in user settings, the top bar "Change Language" is it. Need to understand if there are any UX best practices to offer these change language options and provide good UX for multilingual experience.

You can add flags but the language in words/abbreviation is better. Check: What's a good alternative to flags for depicting internationalisation as an option?

The problem with a button that says "Change Language" is that if it is in an unfamiliar language, the user might not understand it!

However one technique I have seen used which avoids that problem is to display a country flag to indicate the current language.

For a language which is used in multiple countries, it is fairly common to show multiple flags spliced together:

I actually think the text is optional. You could give the flag a tooltip that says "भाषा बदलो (Change Language)" when the site is in Hindi mode.

When the flag is clicked, it can let the user select a different language, by presenting a list of languages in their own native wording, along with country flags to assist. 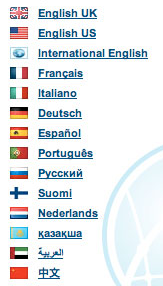 It looks like there are two flags available to suggest the Hindi and Bengali languages.

And for a user who has already used the tool to change language, being able to find it in the same place is almost as important as what it says and how it looks.

Given that your language selector doesn't only change the site copy (expected) but also the posts which are displayed (unexpected), it may be worth explicitly stating this at the bottom of the language selector.

You will only see posts in the selected language.

But a clearer way to remind the user that their results are filtered would be to place explicit text above the list of posts:

I will leave you with a final question:

As it was already said: help people who are unfamiliar with current language. Don't be afraid to show some bit of letters in other language. Imagine someone DON'T READ English. How can they switch to their comfort language? No way — everything is written in alien language right now (for English natives: just switch to Hindi and feel it too).

This is a reason why flags are used so often — they are easy recognizable. But flags can be bad for some other reasons (usually political).

Not the answer you're looking for? Browse other questions tagged language blog user-generated-content or ask your own question.

12
What's a good alternative to flags for depicting internationalisation as an option?

7
How to represent site language and article language without confusing the user?
6
Mixing languages on a blog : cute or worst idea ever?
3
Redirection on language change
3
What is the best practice for a web app with "Change language" on front and back
3
Multi Lingual Filtering
5
What is the best mechanism for language and country selection?
1
What to use as a textual link to a page showing a list of available languages?
2
Handling language transition mid user journey
1
Should I create different databases for different languages of my app?