Is the following approach better for mobiles? Missing 'save' option in Google Keep

This is one of the example from Google's approach with almost all online products these days...

In Keep, when you create/edit a note it is automatically saved(ofcourse) but you don't get any confirmation as such and even if you could, user's mental model of saving something after creating is avoided. This kinda seems to work in Desktops but as user only has option- to go back, in case of mobile screens, it seems to be a lot confusing at first and users have to try out to see how it works. 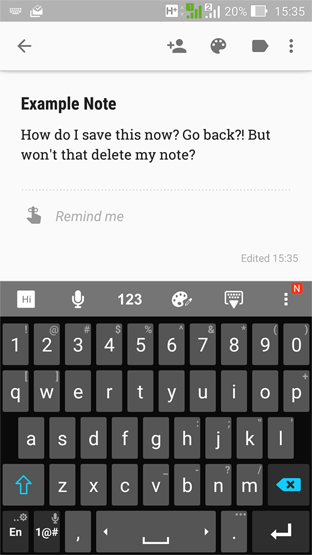 So, are we moving to similar models in UI these days or only Google is creating this and is this really a better approach?

EDIT: Adding further, the problem is that the only option out is Back button which can be perceived as not wanting to complete the task as in case of most website and mobile apps. So, Isn't user's mental model different? I know this is a learnable design but is this a right approach to take?

This has been around for quite some time now and I can think of one app that does this very well. Word Online accessible through OneDrive looks like the following. You get a saving notification and a saved to OneDrive when done. But that is desktop, looking like the following: 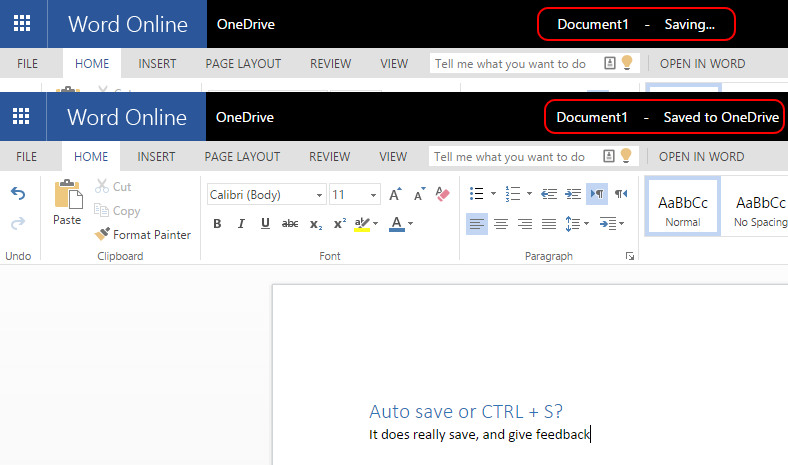 On mobile Word, you have the same text, but you enter an editing mode and have the option to make auto-save or not. That way users are in control of what happens when, and that's a lot better than just confuse users with questions like "Does back mean delete?", "How do I save?". 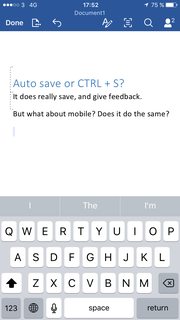 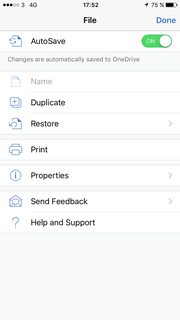 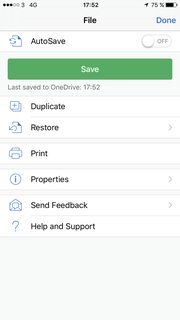 This technique in itself is usable because ti allow you to remove one passage in the process of saving. In a scale of intuitiveness that goes form unusable to intuitive i inserti this technique in the middle: usable. More precisely learnable because, as you have said, it requires a quick learning for the user to understand how it works. Once learned the technique of automatic saving the user doesn’t take care. Mobile ecosystem is young and it grows up very quickly. With the smartphone we can do everything so, i don’t know if in future we this technique will become a normal method but i think not in every situation it works good.

Yes, this approach is better—but not just for mobile! In general, “save” needs to be eliminated entirely.

The Save command exists because computers were originally not powerful enough to save automatically. If an ancient computer did that, you might have to wait a while every time you typed a letter; so the Save command was introduced. This led to a whole host of unfortunate consequences: save dialogues, lost work, and users expecting to have to “save” their work constantly. All this happened with the introduction of the Macintosh. Amazingly, the Apple Lisa saved automatically, because it was a more powerful machine.

Consider a normal person’s mental model: what you see on the screen is what’s on the computer. They don’t necessarily know that there’s a difference between memory and storage, and that the screen represents the former and not the latter. Instead, they’ve been conditioned to press Ctrl+S compulsively because the computer can somehow lose what it already has unless you press this magical key combination. Do people expect their books to lose information? Of course not! So why do computers sporadically lose “unsaved” work? This is not a humane way to treat users.

Nowadays, computers are orders of magnitude more powerful than the Macintosh was. Despite that, applications like Word still act as if it’s still 1984. Web apps, on the other hand, have been eliminating Save (despite it actually being slower to save stuff online); so now users don’t even need to know the difference between memory, local storage, and online storage. This is a good thing.

Eliminating Save comes with a few provisos: 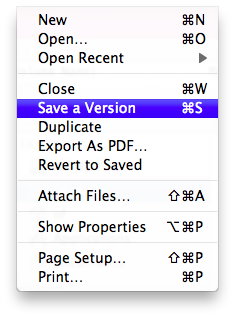 So, to answer your question, it’s a good idea to remove Save in all environments— but make sure that users can always undo and that they can clearly see that their stuff is safe.

I use moto x2.. I don't know it was pure android or moto's own.. But adding contact did not have save button n so neither cancel button.. The back button would automatically save the contact.

Now, after marshmallow update they added save tick at upper right corner.. 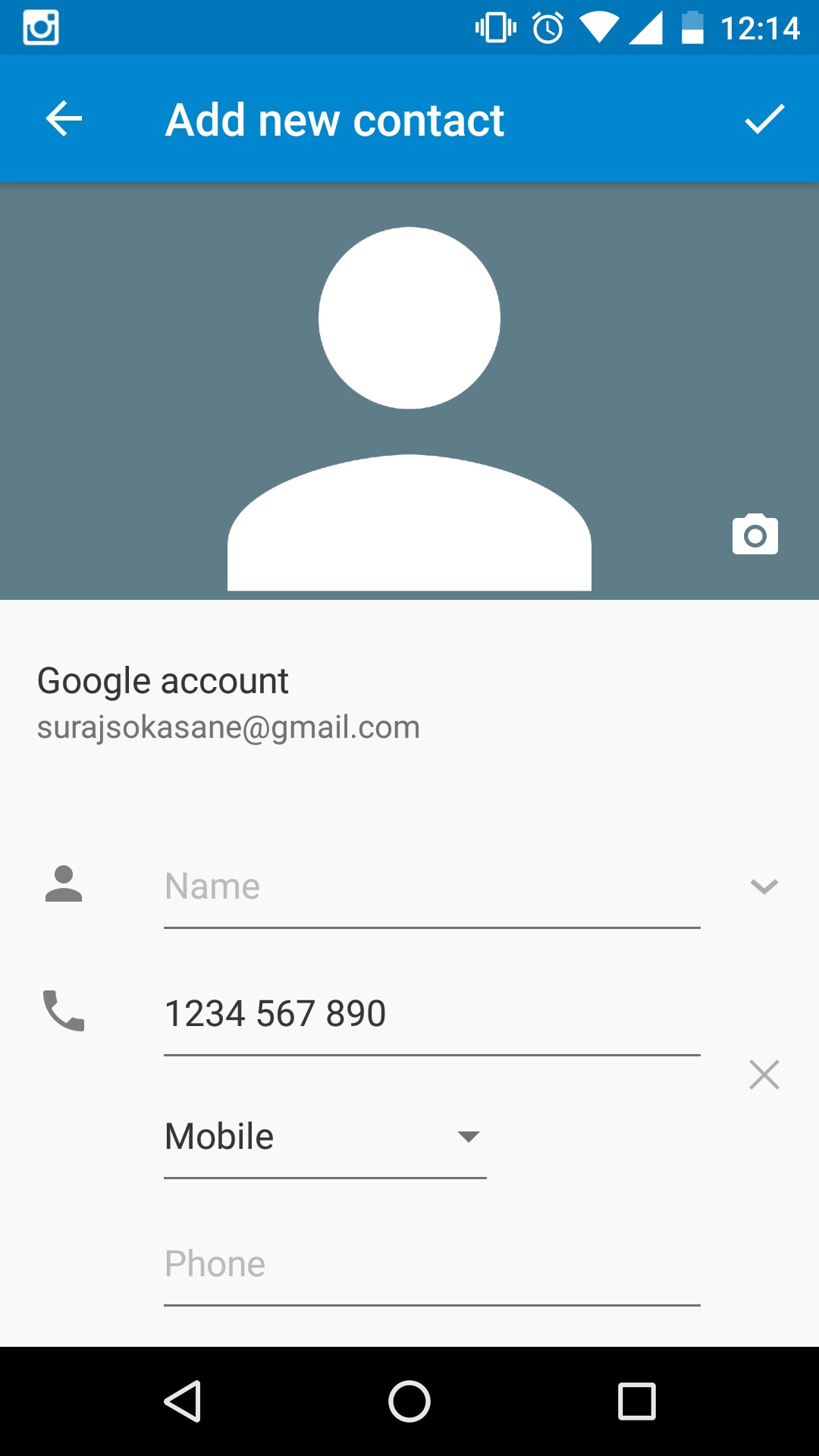 Also, the back button now asks for confirmation if you want to discard changes!

Not the answer you're looking for? Browse other questions tagged usability interaction-design interface google learnability .

2
Where to put element controls?
16
How to reference (and provide links to) online content in offline media?
3
big form VS steps/wizard
1
Usability of selecting a range of data in stock-type charts
12
Are websites and interactions designed to build or skip levels of trust?
0
Best way to organize process of adding child records to a parent record from a UX perspective
2
How to deal with modals and scrollbars
0
Best way to represent hundreds of rows - marketing calendar
1
How can I best display a three-way toggle (show, show all, and hide)?