Some examples would be great.

It's usually best to present homogeneous (comparable) information as a list rather than as cards. The Android Gmail app is a good example of a list. Although there are more than three lines available per email, the email list shows only the sender, subject, and first line of text. This is appropriate because email is often repetitive and the user often doesn't need to read the email to know what's in it; the summary is sufficient.

However, if no reasonable summary is possible for the information you're presenting, you should definitely use cards instead of a list. The Material Design specs are clear: "To display more than three lines of text, use a card."

If you're thinking about going beyond the Material Design guidelines, the Salesforce Lightning Design System has an example of a list-like control with varying row heights and sometimes many lines of text: 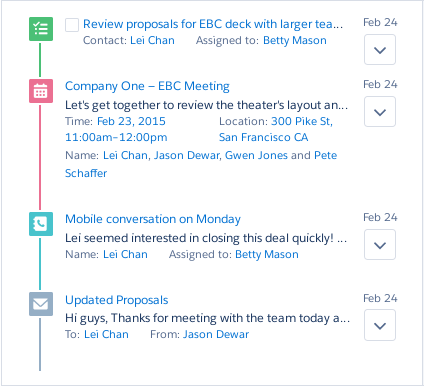 Using list for it should be better. Cards and such would be more space consuming for homogeneous contents. Extra spacing between each elements would be better if used to differentiate heterogeneous

1
Ecommerce Mobile - List of products: should I show them in cards or divided by lines?

9
Stacked modal dialogs (with Material Design)
9
Tree navigation in material design
7
Best way to share from a Material design list
2
Material design for progress inside a list item
0
Effectively displaying complex "expanded/extra" information in a list
10
Are there Material Design best practices for Filtering/Sorting in a Tab Layout?
2
Example Lateral, Forward & Reverse Navigation in Desktop Applications
0
Material Design for web: Buttons with labels or icon buttons?
1
Is stepper component obsolete from a UX perspective?
0
Actions as icons on card