I have to define the best pattern for an usage internet indicator, where the service plan doesn´t have limits but clients who move over the mark above 150 GB, your speed connection will be dropping down from 20/10 mbps to 2/1 mbps.

So, when it's happening, i need to show up something like this in the client dashboard panel. 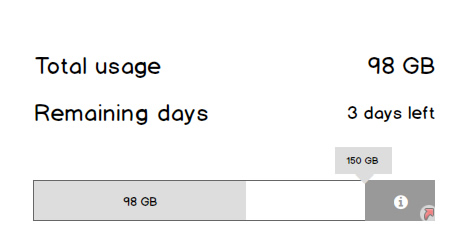 I thought in a thermometer with color progress indicator. Setting a marker in the 150 gb. So i have defined this: 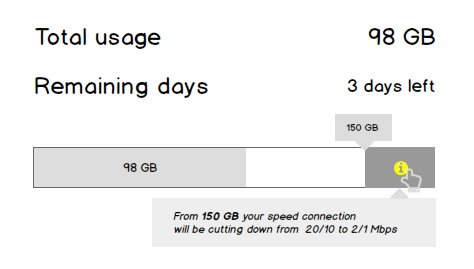 but it may be something unintuitive.

It was defined using:

Have you seen a best way to reach best pattern ? Let me know what are you thinking about this issue!

The main thing that is missing in your diagram is a sense of how far through the billing period the chart represents. I'm not convinced that a number of days remaining is a good way of communicating that either.

The problem for your users, presumably, is whether or not they're on track to go over their data allowance and get shaped, or if they can keep going at their current pace.

You could consider either showing another chart beneath it at the same scale representing progress through the billing period (e.g. If its monthly billing and I'm 18 days through the month but have used 100 GB, the period chart will be behind the usage chart, indicating that the user is on pace to be shaped and thus should change their behaviour), or a two dimensional chart with time on one axis and allowance on the other.

This second option would effectively look like a burndown chart, with the data remaining shown on the left and the days on the bottom, and as per a burndown chart you could fairly easily indicate how much usage per day could be accommodated under the user's cap, and how many days of shaped speeds the user will have to endure based on their current usage trajectory.

As far as communicating the effect of exceeding the cap, I don't believe that is useful to present on the chart itself as much as an annotation or note beside it indicating that any overage will not incur a fee but will result in a slower connection.

To give you an idea of what I mean, here's a chart I threw together in Excel based on the data in your example: 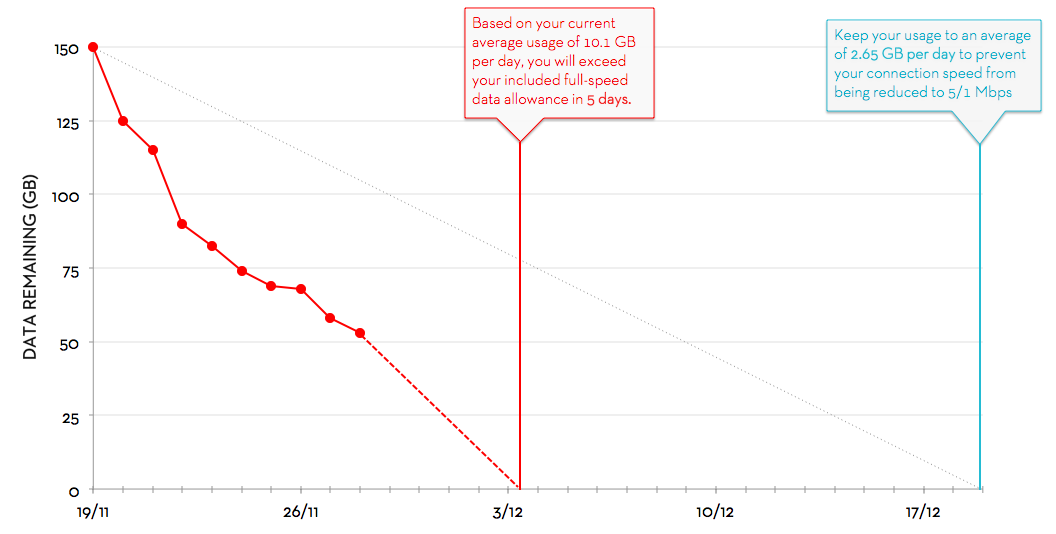 I'm sure you can increase the information density given the real data and your actual billing periods, and the visual design leaves a bit to be desired, but hopefully you get the point.

As mentioned above, I think it you should probably think hard about how much value the on-chart annotations have (as opposed to simply listing that information off to the side of the chart and allowing the chart to speak more or less for itself).

That option has the side benefit of being accessible to people who can't load the chart for some reason or another (the three annotations listed in plain text on the page effectively describe the most important information in the chart in a non-visual way).

The users may think there is a cap rather than an unlimited amount. Adding a 98 of Unlimited to the indicator would be helpful.

How about this.. it will always display the threshold and speeds without having to hover over or display a message etc.

I've spent the last year user testing the best way to solve this 'type' of challenge for a mobile operator.

There are so many candidate visualisation that on the surface seem to have the ability to illustrate what's left from an original allowance that support burst scenarios where original limits can be exceeded.

There are many user perception challenges at play all of which circle around data literacy, understanding of what's included in a subscription and personal outlook - glass half empty or half full.

One comment on your base allowance of 150GB. This is a HUGE amount of data, from the data I have available for both mobile and broadband the chances of a consumer (not business) to get anywhere near this is slim unless it's measured usage over many months.

If you are confidant these numbers are correct then great if not you'll be in a situation where the interface is far more complex than it needs.

Ultimately what we found over the past year is.

Users know how much (data) allowance they pay for but its a good thing to confirm in the interface.

It's an exception to hit a threshold above about 5GB per month.

The most accessibly, understood and clear interface is a copy based message clearly informing that the users has x of y left that refreshes on a specific date that is x number of days away.

Tool tip are regularly missed or unintuitive and because of the implications of hitting the defined thresholds I'd recommend stating these warnings as persistent messages when appropriate.

On another note this service experience is the reality of what someone has signed up to or been sold. These type of service status message almost always start to drive dissatisfaction therefore the end result will need to be sensitive in the way the message or warning is landed.

After all this time working on this challenge I'm not comfortable suggesting that there is an optimal solution.

My recommendation to you is test multiple options and evaluate which is most understood by your audience and fits comfortably alongside how the service was initially sold particularly as speed 20mb and amount 150GB are very different entities.

Not the answer you're looking for? Browse other questions tagged indicator progress internet or ask your own question.