I have to offer a list of options e.g. Small, Large, XLarge, etc plus the ability to input a dynamic value e.g. a number.

I thought about a split input box where the left side is editable and there is a dropdown button to the right side with the list of options e.g. the font input in Word.

However this example is clear on input type as the list of options is the same type as what you can enter. In my example the lsit of options are strings whereas the manual input is a number. 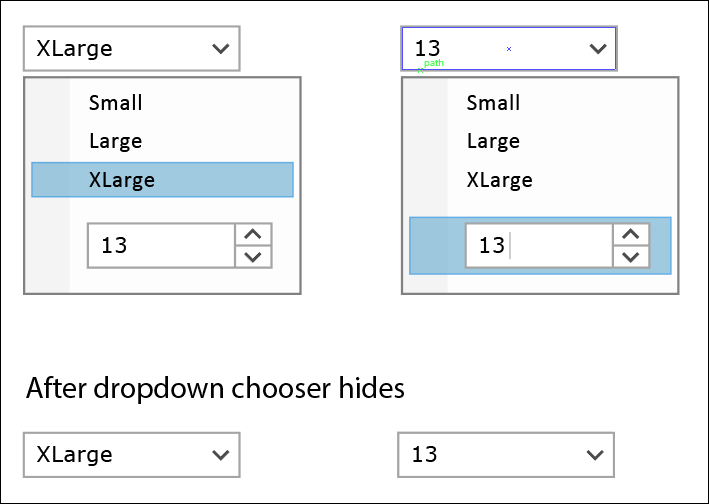 So I thought about this idea, where there is a dropdown list plus an input box where a figure can be entered, and its obvious what the input type is due to the default value and the stepper to the right.

Is this idea the right way to go or are there better ideas?

N.b. This is for a Windows desktop application but cross platform solutions are welcome.

Straying away from the UI design question for a second, I would suggest making sure that it's clear to your users what the relationship is between the size names and the numbers. If the sizes are supposed to map to numbers, this mapping should probably be explicit, otherwise users (especially inexperienced ones) might be confused by the fact that you're presenting them two disparate sets of options for the same input.

So, consider changing the labels of the sizes to something like "Small (3)" or "3 - Small" or whatever, so the mapping will be totally clear and users can choose confidently.

If the sizes don't really map to numbers, perhaps they should be separate controls, and users should be asked explicitly to decide which type of input to provide. For instance, a normal dropdown could be the default control, with a checkbox nearby that says "provide a number instead," and when that is checked the control is replaced with a number input, signifying that a number will be used instead of the sizes (whatever that means).

On to the control itself. The pattern you're suggesting is very similar to an existing Windows control type: the Combo Box. From MSDN's documentation:

So, if your project is using Microsoft's framework (you mentioned it was a Windows app) the control may already be built-in and ready to go for you. If you're using something else, I'd recommend following the patterns established by Microsoft with this control, since it will probably be familiar to some users. But, to reiterate, I think the biggest potential usability problem with your solution isn't the layout or functionality of the control itself, it's the way you're presenting two different types of information as options for a single input.

What i'd do is add the figures that small/large/xlarge represent in brackets after the string i.e. Small (5) or maybe even 5 (Small). This'd give the user the hint that these strings are just equivalents of numeric values and allow them to compare whatever numeric value they're entering to them (or even to judge whether to pick one of those defaults first)

Not the answer you're looking for? Browse other questions tagged input-fields drop-down-list or ask your own question.

3
Drop-Down List with two types of data? User choice of either
28
Is constantly updating the formatting of a numeric input box a good idea?
4
Should I display Edit/Delete Buttons when only one field is editable?
1
Dropdown options that open popups
2
Use the same search box to search different types of data
2
add your own entry to a select list
3
Are numeric “steppers” or “spinners” on text fields simply bad UX?
2
How to revert back to a default input field value?
49
How should I allow a user to input a number where not all numbers are valid?