I am going to conduct a survey with a 4-point Likert scale. The questions are divided into headers. The responses will be scored and each header will be given a score.

I would like to know if its ok to assign negative scores to the Likert scale E.G.:

or should i just go with positive numbers:

I would like to know which one is a better practice and what are the implications of each method.

Don't show the numbers to the test takers; it will only confuse them. But you may want to use them internally.

Balanced keying (using an approximately equal amount of positively and negatively keyed items) is often used in psychometry and is considered good practice. It allows you to approach a topic from different perspectives.

Some sample items (measuring extraversion):
+ keyed: Feel comfortable around people; Make friends easily; Am skilled in handling social situations.
– keyed: Have little to say; Keep in the background; Don't like to draw attention to myself.

With a four-point scale, you'll probably find that option 3 will collect most of the 'neutral' or 'don't know/don't want to tell/don't understand' responses that would otherwise go into the middle option. For analysis, you can just assign scores 1 (strongly disagree) to 4 (strongly agree) for positively keyed items, and reverse them for negatively keyed items (4 for strongly disagree and 1 for strongly agree). If you allow to skip items, it makes sense to use a scale with a mean of 0 so you can count any non-answered questions as 0 while still using simple addition to calculate the total score.

As for the number of categories in your Likert scale: fewer categories allow for faster decisions and faster completion times of the questionnaire, more categories are slower but people will (subjectively) feel that they can express their feelings more precisely.

Something to keep in mind with Likert scales is that they are ordinal scales, not interval scales. It often works quite well though if you assign numerical values to the categories and use them to calculate a total score. There are alternative methods available for working with polytomous items and calculating totals, such as item response theory, taking into account individual item characteristics, but they're not as clear and practical as simple addition.

With Likert scales people (especially introverts) tend to avoid the extreme categories (I did a research project on this, and it was striking how often for the same question people would answer 'yes, absolutely!' in natural language while in the Likert scale questionnaire they didn't choose 'strongly agree'). If you give the extreme categories less weight, that could influence the totals.

Here's an example: total scores for a 5-question extraversion scale calculated with both methods and plotted against each other (for 2700 people): 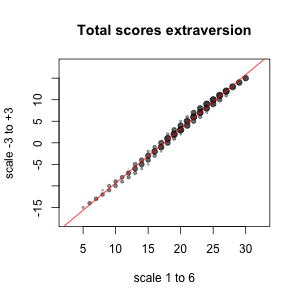 The scores don't fit perfectly and the differences are statistically significant, but for most of the scores it doesn't make a large difference. The maximum difference on the total score here is only 2.5 (and if you adjust for the different ranges only 2). Looking at the score distribution (range adjusted again) you see the same pattern: 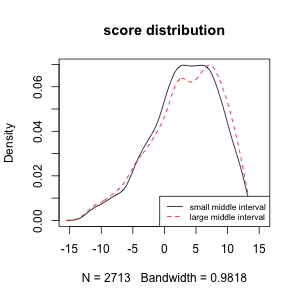 So in short: if you want to use a coding scheme -2/-1/+1/+2, go ahead; it probably won't matter for the end results. The extreme response categories will count a little less, and the range of possible scores differs from the other scheme. Results will differ, but you can expect the difference to be small. (However, I'd go with the simplest scheme.)

Building on Marielle's excellent answer, I just want to add that you should be careful when assigning numerical values to a scale that is still basically qualitative in nature. That doesn't mean you shouldn't, you should just be careful how you use those values. When you have a value, you can calculate things like percent changes between two measurement periods.... but these percent changes, and many other statistics, are sensitive to what numbers you arbitrarily assign to the scale.

As an example, an insurance company was considering awarding a special bonus for x% improvement in customer satisfaction scores for each agent. They used a mean of 1->5 satisfaction scores to rank the employees, until somebody pointed out that going from a 1 to a 2, or going from utterly dismal to less dismal, was a 100% increase, while going from a 4 to a 5, from great to flawless, was only a 25% increase. Arguably, the second employee was better deserving of a bonus, but they only looked 1/4 as good on paper. Basically, their use of numerical scales and means wasn't working for what they were trying to do.

Because of these difficulties, I prefer to avoid assigning numerical values to responses if I can get away with it - but I can't always.

Use positive numbers only.

A Likert scale gains nothing from the use of negative numbers. In fact, you are likely introducing a bias into your responses because the negative numbers will create an emotional response - driving users to selecting the most moderate of the positive responses (partially due to central tendency bias).

A couple of things: 1/ Your scale is lacking the neutral value in your Likert scale (Neither agree nor disagree) as most such scales are based on five points. 2/ You can add values to each scale item but indeed, you should not display these to your user / respondent at all as they could induce a perspective. Often, such values can be negative in survey methodologies (market research, opinion polls, ...): Strongly disagree (2) Disagree (1) Neither agree nor disagree (0) Agree (-1) Strongly agree (-2)

1
How to set cutoff value/cut score for 5-point likert scale?
4
Can SUS scores be used for comparison between different systems?
3
How should the Don't Know/Not Applicable option be handled in a Likert Scale?
0
More effective for surveys: horizontal Likert scale or answer options listed vertically?
3
What's the best way to interpret Likert Scales with equal negative and positive Likert Items?
1
When calculating PSSUQ scores, what happens with NA answers?