What are patterns for having user check correctness of data?

In my app design, users need to check the correctness of a list of OCRed data (about 3-10 items depending on the context). Is there a pattern for this? I thought of toggle buttons: 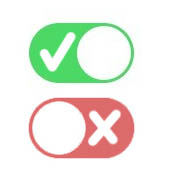 Toggles are generally used to turn things on or off though.

A wizard showing each item separately is not desirable, as it would require to many actions from the user to mark all items that generally are correct anyway.

How much of the items do you expect to be wrong? Do you have any data that would suggest that? If majority of items are expected to be correct I would simply list items (correct by default) and have a button "Mark as wrong". It could be an icon alone, this depends on the UI a lot. When the user marks the item as wrong, the background perhaps changes and the content of the button as well. Something like "No wait, it's right".

In the end, a default option (correct) and a single call to action (mark as mistake) would make the whole interaction much clearer that the toggle buttons. Another case against the toggle buttons is, as you already suggested, that it's not a UI pattern commonly used this way.

Not the answer you're looking for? Browse other questions tagged data wizard toggle or ask your own question.

3
What do you think of data mining in user research?
3
What is the best practice for displaying mixed data in a single data grid?
0
Best way for user to select data filters on a winforms/desktop ux?
2
What are the fundamental Metrics in a data-driven design?
16
What are the UI/UX guidelines for data heavy modern style Windows apps?
2
Presenting a list of sequential actions in a Windows application
5
Mixing flip-flop/toggles and binary state buttons
2
Indication for dummy data for new user
4
Ask user to check categories of an item and then display category-specific options
15
Does an on/off switch still means on/off when positioned horizontally?