Is it OK to use hamburger menus in iOS?

So, I have about 7 actions users may need in my app, and I have to use text instead of icons because it is a customer requirement.

I can add only 3 actions to my toolbar on iPhone 6. On Android you have the hamburger menu (see image), but I have never seen it in iOS.

So, what is the appropriate concept in iOS to add many actions into a menu?

If you want to follow Apple's Human Interface Guidelines then you have to think of another pattern, because last year they announced that hamburger menus are not a welcomed sight in iOS applications:

And again, I’m not going to say that there’s no place for these controls categorically. I think there are some apps that could maybe use one. But I will say that their value is greatly over-stated, and they have huge usabiliy downsides too.

Remember, the three key things about an intuitive navigation system is that they tell you where you are, and they show you where else you can go. Hamburger menus are terrible at both of those things, because the menu is not on the screen. It’s not visible.

It takes at least twice as many taps to change sections. Something that should be very easy and fluid is made more difficult.

I don't personally agree with all of these statements, but this is Apple's view.

Edit: I noticed I didn't offer you a better alternative.
You can have many navigation alternatives in your iOS Tab Bar by simply adding a "More" tab: 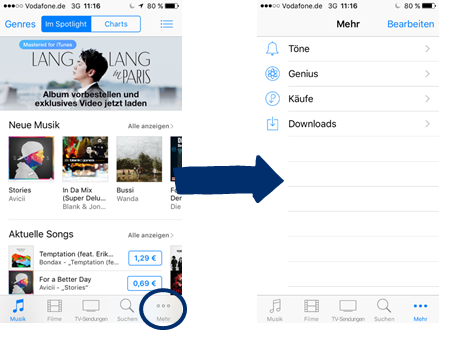 There you can place those options that are not as important as the other 4, which are always visible. For more information you should have a look at the iOS Tab Bar Guidelines (scroll down a little).

I see the hamburger menu in several iOS apps on my phone: Google Maps, Google Drive, Netflix, IMDB, Wikipedia, etc. YouTube uses a "kebab menu," which is similar. So my answer to your question is yes, it's okay to use it.

Interesting that I don't see it in as many apps as I thought I would.

Since navigation drawers are a standard pattern on Android (and yes, on Google's iOS apps) it is well known by users but Android also offers tabs, even swipe tabs to display more items than a screen might be able to present at once. They're basically hidden behind multiple swipe gestures - And this is exactly the problem with hamburger menus as well.

They might hide important information, they're not easily accessible on iOS since it conflicts with the push back swipe gesture (keep in mind that also iPhones became bigger and bigger in size and it is harder to reach buttons in the navigation bar), they don't allow for quick navigation between sections and they tend to just hold all information behind an icon. That said, please don't use a hamburger menu in your iOS app. Reconsider your navigation pattern and think about the hierarchy of items. You should use a tab bar and hide less important items in the last tab section of your app.

Why and How to Avoid Hamburger Menus

Not the answer you're looking for? Browse other questions tagged ios toolbar sidebar hamburger or ask your own question.

2
Side nav menu on iOS app?

0
iOS views with 2 primary actions instead of just one
4
What is the most appropriate opposite of “Select All”?
0
Does avoiding the hamburger menu on Android break a core platform UI pattern?
2
Drawer Menu (hamburger) icon visibility, no background?
1
Combining tab bars iOS
1
Arabic, user friendly mobile menu - iOS
0
iOS user friendly, mobile menu
4
Android TabStrip navigation alternative on iOS
1
What design paradigm would you use instead of placing 3 icons in the navbar on iOS?