Is there any reason why an iPhone like UI paradigms shouldn't be adopted while designing a desktop application? Let's say you're developing a windows application, can you not use something similar to a Navigation Controller to push and pop views? Tab bars to separate out discrete pieces of functionality? And presenting table views that you can drill down into instead of just lists of information?

One reason I can think of to not use these patterns is usually desktop applications are much more complex and it might take a whole lot more clicks to do this.

On the one side, Mobile UIs provide features that are well-suited for touch based interaction on small screens (which is not the case in the desktop). On the other side, mobile UIs emphasize: the need to focus on the task in hand, the need for being responsive and the role of content among other aspects that can be applied to desktop apps.

In my opinion you could try to follow the UI guidelines for tablets (see iPad specific guidelines from Apple) where screen real state is not so constrained in order to obtain a desktop application with the benefits of the mobile-like design (except for the touch based interaction). You can compare the UI for the mail client in the picture below: 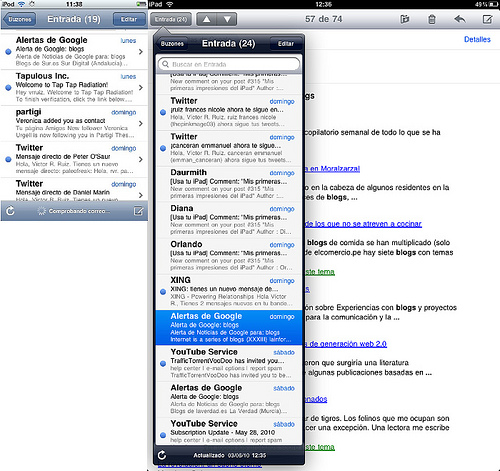 I've recently designed a desktop application which uses some iOS based patterns for drill-down menus. It's not so much a case of touch vs. pointer but the actual flow of information and how it is revealed within the UI. In the app that I'm referring to the user is required to build campaigns out of a vast variety of content from different sources. So the UI includes a panel on the left which uses similar proportions to those in iOS - as the user clicks on a content source in the menu, the menu slides right to left to reveal the child options. They can continue to drill down until they reach the select-able content. Works much better then a tree or drop-down based flow, which would be more traditional in a desktop based context.

The iPhone type of UIs works great on a touch based device, since you have a limited screen size and your pointing device (finger) does not offer that much precision. However on a desktop you use a pointer with high precision and the screen size is often not an direct issue.

I personally don't see any reasons for adapting touch UIs for desktop applications until we can operate the desktops with full touch functionality, It just seems to artificial.

There's certainly things to borrow from it, but they are entirely different interactions. One is touch, one is mouse driven. One is a confined screen, one is HD.

But in terms of individual widgets, such as the tab bar, yes, that's something that could be shared (and Apple is doing that at times).

Over time, these may blur a lot more, though. Windows 8 is attempting to go in that direction. Will it succeed? We'll have to wait and see.

My favorite way to describe this is with the phrase "visual queues".

Find what are those widely unerstood components from each UI, Android, iOS, Windows, Symbian and cherish them. Only the most intuitve ones, the ones everyone gets. Don't mix different UI styles, only use the workflows. It does not have to look iOS as lond as you bring in your application that certain logic, that complete workflow that make it so familiar.

Don't worry about one or two more clicks, as long as the user perform them out of their

Then you get your own unique creation and it is also somehow familiar. As an extra bonys, try to use as much of the popular platform you are working on - for example, if you are working on Jqeury, try to invent as less menus as possible. Use the ones in the examples slightly modified.

We already have NavigationController on desktop: step-by-step wizards on Windows, or installers on Macs. So, your customers are already familiar with this ui-element.

However, I wouldn't recommend blindly porting touch gestures. For example, Clear has a desktop app that almost completely mimics their iPhone app. Touch-based UI that worked really well on a phone, doesn't feel that nice being used on a laptop. Especially, if use a mouse instead of touch-pad.

Not the answer you're looking for? Browse other questions tagged mobile desktop-application or ask your own question.