I'm currently working on adding a right click option to an existing Windows 7 desktop application. The application displays a number of "points" the user can click on. If the user right clicks a point, I'd like for a context menu to appear displaying options. However, I'd also like to use the context menu to tell the user the name of the point they selected.

Here are a few examples of what I had in mind: 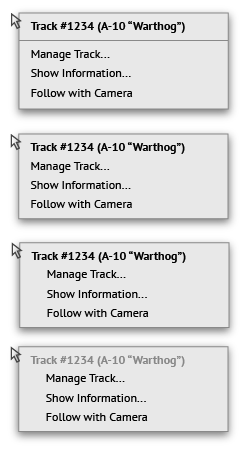 Here is my question: would it feel natural to the user to have a title on a context menu in this particular situation? How could the title be presented so that the user doesn't want to click on the title, and without the context menu looking too different from a standard Windows 7 feel? Would it be better to approach the problem from a different angle, such as showing the name of the point that was right-clicked elsewhere on the GUI (outside the right click menu)?

Problem: A menu item that isn’t a menu item

Context menus don’t have titles because the class of the selected object is the name of menu, and it’s assumed the user knows the class by the object’s presentation (e.g., symbol) on the screen (in your case, the class is Track; in other cases, it could be Text, or Shape, or Image).

You want to use a menu item to identify both the class (which should be unnecessary) and the object (which seems like something useful to me if it can’t be shown statically on the screen due to clutter). The problem with all your solutions is that the title may be confused with a menu item; worse it may be confused with the default menu item (what the user gets on double-click) due to its bold font (it would seem you have no default menu item, but you probably should have one).

Fortunately, there are two relatively simple solutions that should work:

IMO, its not natural to have a title on a context menu . You may approach this in a different angle maybe adding tooltip when hovered on the point.

If I have to choose, I'd pick the first one

I see nothing wrong with displaying the name of the clicked item as a title. I think it is a good thing as it gives you a confirmation that you are acting on the right item.

If you are concerned about people clicking the name you can run some user tests and see how it works. I think it will not confuse people since the title is a noun and the actions are verbs.

Another thing you can do is to separate the title visually even more, by adding a subtle background color for example (I'm talking about the first image).

Yet another improvement could be to display the menu a little higher so that the mouse cursor ends up in the same line as the first menu item instead of the title.

Not the answer you're looking for? Browse other questions tagged desktop-application or ask your own question.

5
Managing multiple windows in one application
5
Menu organization : conventional or domain-specific?
1
An intuitive way to present a Login interface
8
Best Practices: Save and Exit in Software UI
4
What's the best way to allow a user to revert an input field to a default state?
1
Lazy context menus
2
Ribbon UI on mobile devices
1
Design of Login/logout menu
1
Standard for using the system tray?
5
How should double-click (to select text) on a space being handled?