How to visualise flow in a graph with overlapping paths

I'm designing / implementing an animated visualisation of flow of people between departments in a building.

Departments are presented as circular nodes, where the size of the node indicates volume at a given time. Connections between nodes need to indicate volume of flow between departments.

I'm struggling to decide how to present the flow of people, given that the graph has many overlapping paths, and this could cause the visualisation to quickly become too busy or unclear.

My graph has at least 5 nodes, and people can flow from any node to any other. There are also entry and exit nodes I've excluded for simplicity. 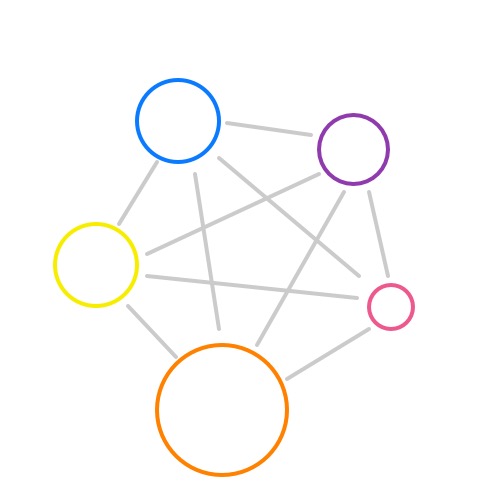 Line width is one option to indicate volume of flow, although direction of flow may be difficult to represent.

I also thought about using small coloured circles moving along the paths (as in the example at the top of this page), but I feel that might get too cluttered with so many paths overlapping.

In short, I'm looking for a clear way to present directional flow in a graph with multiple overlapping paths. Any suggestions appreciated. Thanks!

The simplest solution would be to employ arrows at the line ends.

Alternatives are graphics that show direction of the flow. They can be animated in the loop in a close up and stay static in the zoomed out view to reduce clutter. 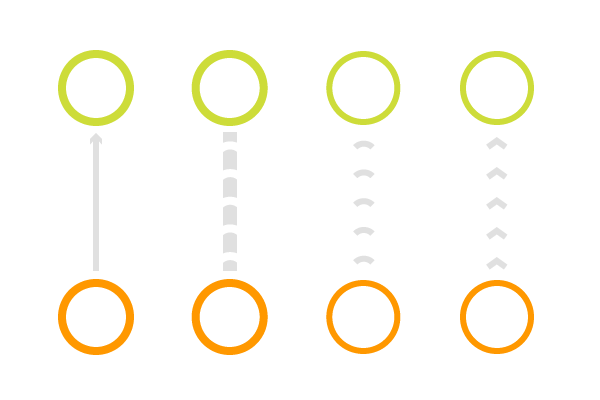 Building on Zoe's suggestion … if the flow is in two directions, show two arrow heads. And for clarity, consider when to quantify the movement.

For legibility, think about whether to keep the quantity (text) upright on the screen, rather than perpendicular to the arrow direction.

I wouldn't animate the arrow to show direction, because that turns the illustration into a circus of visual distractions.

Similarly, I wouldn't stutter the line, because more objects make the image more difficult to interpret.

You might consider whether the colours are useful. Typically, the meaning of colour is poorly understood.

Get specific only when needed

Perhaps the quantities only need to be present when the user toggles Show movement—but be sure to specify the period during which the movement occurred. (Was it an hour? A month?)

The same applies to the count for the circles themselves. (Is a large circle 10? 1000?) Perhaps a toggle to Show the counts could reveal and hide all this detail in one simple toggle.

17
Good ways to handle precisely overlapping data points in a graph?
5
How to visualize similarity of one file to another?
5
Best flow to represent, browse and edit complex graph network
6
How to handle overlapping elements?
3
Best graph for data with both very large and very small values
1
Making a network graph more readable
5
Visualize popular routes/connections
11
Graph with overlapping labels
3
Display more information about nodes
1
How to visualize graph with different data types: boolean & integer?