How to show the relationship between two sets of data over time and geography?

I would like to show the relationship between two sets of data, over a large period of time; distributed by geography/location.

The data set has to do with ATM data; so it has the following:

I would really like to use a heat map that is animated (a time lapse); but I am not sure how to display two sets of data trending on the same area.

Is there another visualization I can use? The user interface would consist of pausing and resuming the time lapse animation; and not interacting with the data itself.

It is a strict visualization.

The goal is to see (over a range of time) which regions have a large difference between deposits and withdrawals; in order to better schedule replenishment of ATMs.

I'm going to assume that only empty machines matters, ATMs that are flushed with cash isn't important. Also the overall regions with empty ATMs are more important than the levels at specific machines. Although I think the concept below can be tweaked to provide both. 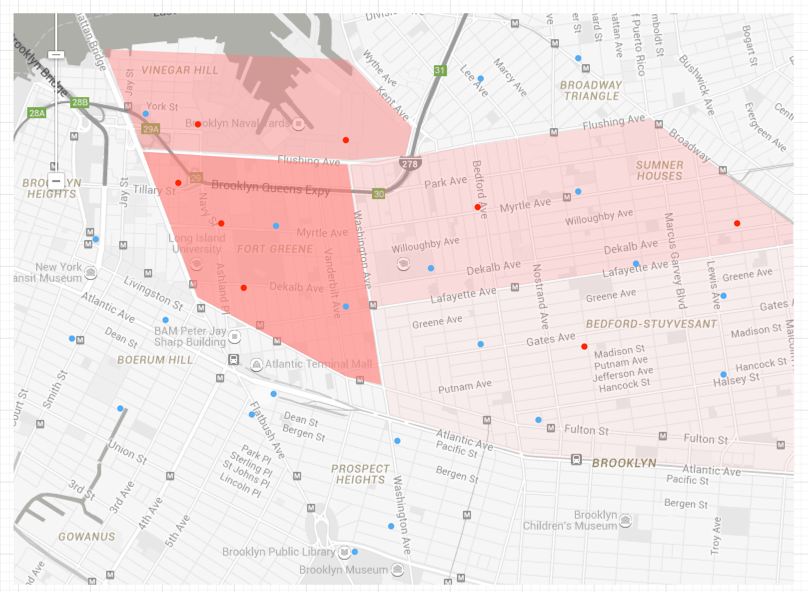 The shaded regions indicates areas that's most in need for replenishment. The darker, the more urgent. The dots on the map represents ATM locations. Blue for a "happy" machine, red for a "depleting" machine. You can use additional symbol, color etc to denote various levels on the machine.

In fact something like this may do the trick if your map is more zoomed in.

Taken from Zeo's answer for another question.

User can then jog a timeline to see changes across the various regions.

I like Nightning's idea with the map, but for just a comparison of the regions' deposit/withdrawal flow Sankey Diagram would work perfectly.

Here's a mockup: there are two sets of blocks, each block represents a region/area, left set stands for withdrawals and right for deposits. Timeslider allows user to time lapse and see which volumes were critical at what time of the day (week/month). 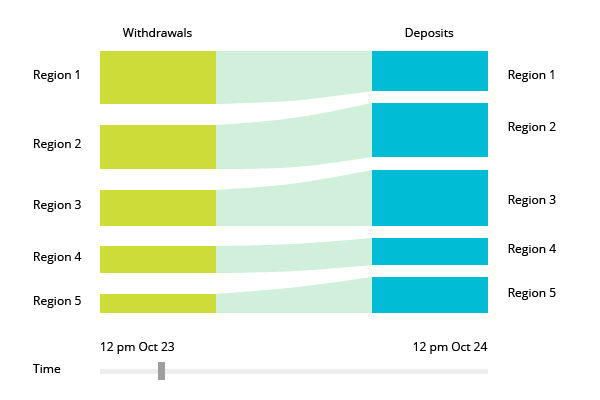 But if the goal really is about planning time of the replenishing cash machines, then time is a key variable here, and a simple stacked bar chart with time on X axis would work better. The Sankey above doesn't allow a good and precise comparative view of the volume in two and more moments of time at once.

Your two metrics are measured in the same units but otherwise seem unrelated. It might be worth going back and thinking about why user wants to see these two data and what they will do with the answers.

If you considering a heat map your points must be close together. If not you could try a 3d map/chart with columns for the two metrics.
http://vizicities.com/ might be a fun library to look at (though omit the 3d buildings of course)

Seems like you need to pinpoint activity at the micro level in a larger scale. Something like animated dots on a map might work, like this http://tipstrategies.com/geography-of-jobs/ You could also summarize the larger region changes using the background of the map.

Not the answer you're looking for? Browse other questions tagged info-visualisation heatmaps or ask your own question.

2
Data visualization: go with conventional format or a different format?

6
How to show related data together in one diagram?
4
Comparing data with two sets of dates
2
Infographics: show relationships between two sets and within them
0
How can I graphically display my data on car sales trends over time?
4
How to show the relationship between two input fields with different units
1
How to overlay multiple sets of quantitative data on a network?
0
Better way to compare two data sets visually on a page?
2
Displaying Continuous and Discrete Time Series Data
7
How to represent differences between two rows of a database
1
data visualization - how to visualize the lack of data for certain amount of time