I'm working on a form that will be used by users from all over the world to register for an account on a B2B website which is entirely in English. In order to create this account you need to provide your (real) name. Using one single field is unfortunately not an option, so I need to use two name fields.

I wanted to label one field "Family Name" (as this W3C article suggests) but I'm unsure if the other field should be labeled as "Other/given names".

I thought about using one of these labels instead:

That is my current wireframe 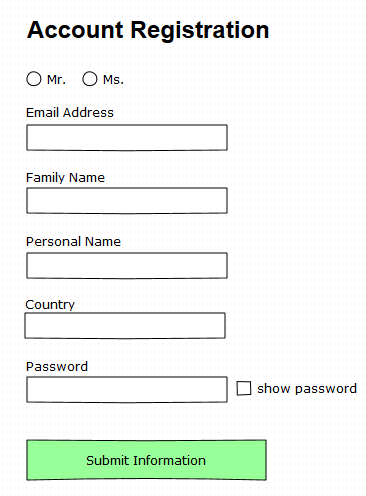 If your users are not familiar with the terms "Family Name" and "Personal Name" (I'm not), then you should put them in the right order to help them figure out what you mean. That is, switch them in your example to show Personal first and Family last.

As per your wireframe, I would like to recommend couple of things;

I'd focus the form on the largest expected demographic - if that's English, then go with 'First' and 'Last' name.

You are using Eastern order for the name. We sometimes use this for formal lists of names (Smith, John), but not in general use. If you need to support people from eastern cultures or Hungary then you may want to localise the order based on the language/locale. Some Eastern Order cultures swap names when transliterating them into latin characters so be careful.

But you said it is English language only; so I suggest you use the common western order, side by side and label them carefully. You will probably use the names in that order in the output so keeping them side by side is good. A bit of local help might be good too (e.g an info icon and pop-up, or tooltip to explain).

(If you are using these names for searching you should assume that they might be swapped in some cases.)

I would avoid using "personal name" because technically your whole name is a name personal to you. And some people may get confused and think "personal name" means a nickname.

For an English Oriented Audience

If your audience mostly speaks English, then you might use this:

For an International Multilingual Audience

If you are targeting an international audience, you should avoid using "first name" and "last name" because some cultures actually reverse the order of names. (For example, in English the name would be Kim Chang, but in Chinese it would be Chang Kim instead, with the family name listed first.)

I would suggest "Surname/Family Name" for the "family name" field, and "Given Name" as the second field.

So if their name is John Smith, they would fill out the field:

If they name is John Michael Smith, then they might fill it out as:

Not the answer you're looking for? Browse other questions tagged forms internationalisation or ask your own question.

18
Should apps allow the use of non-Latin names?
1
Show mapped input in form
9
Can I reformat personal names obtained from a single form field?
6
Intuitive cross-cultural terms for full name and name-to-be-addressed-as
2
Field label alignment and the problem of internationalization
7
Putting names on international business cards in a helpful way
1
Should nationalities in an input be listed in country name or adjective form?
0
Form for creating/inviting new users
3
First Name & Last Name VS Given Name & Family Name
3
How to deal with official country names which aren't understood by users?