Building a feature for desktop,tablet and mobile which uses a timeline to show the latest update. the amount of updates on the timeline is unpredictable. For mobile we have already used a vertical timeline where the latest update is on top (the mobile app is only available in portrait mode. For the web and tablet version would it be a better experience to use a horizontal timeline, as i've seen in most cases timelines on desktop have been horizontal. however these are mostly cases to represent history. 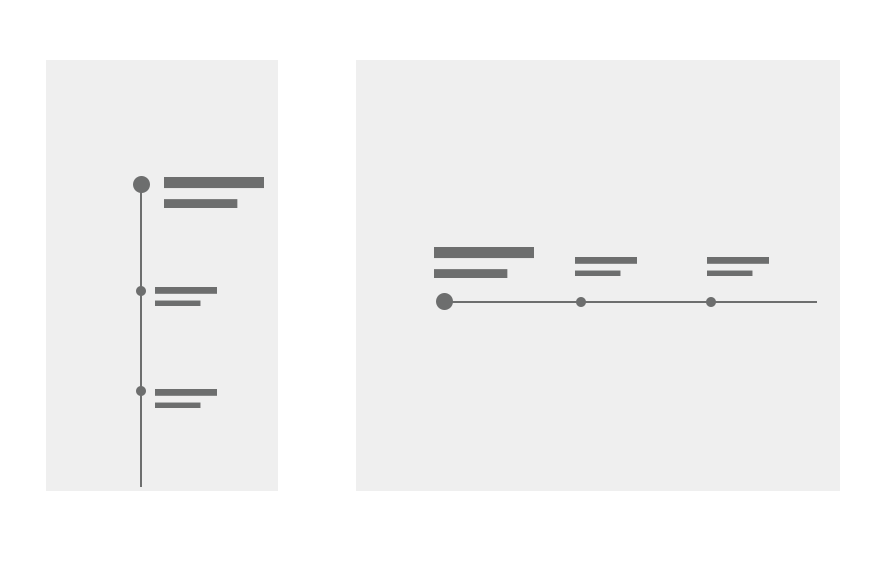 Like anything in UX, it will depend on your context. For example, if the data displayed in timeline is about payments, or changes you have made to something (let's say you changed a file in an app, or updated your avatar), then the latest activity should be on top, and left in a horizontal layout.

However, if your timeline is about history, it's better to place latest event on the right extreme (or end). Of course, speaking of a layout for western people, or any other culture used to LTR reading direction.

In order to think the best option, you can apply the following approaches :

Whenever the timeline is a representation of a cumulative process, where each event will be a consequence of a previous one, it's better to show preceding events first, then "build" the experience that will end with your last instance. Obviously, history is the more direct example, same as any social science.

See image below taken from this question 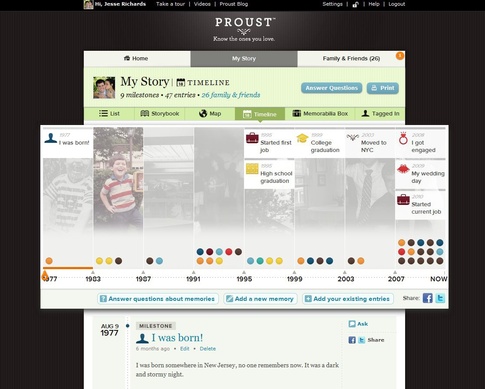 On the other side, if your last process replaces the previous one, then you can display the last process in first place, since previous instances are basically logs of former statuses. A profile edition is a good example: while previous instances may be of interest (for example to get back to said instances), they really don't influence the current status, therefore aren't needed to give context to the newest instance.

See example below, taken from Lessons learned while designing a timeline: 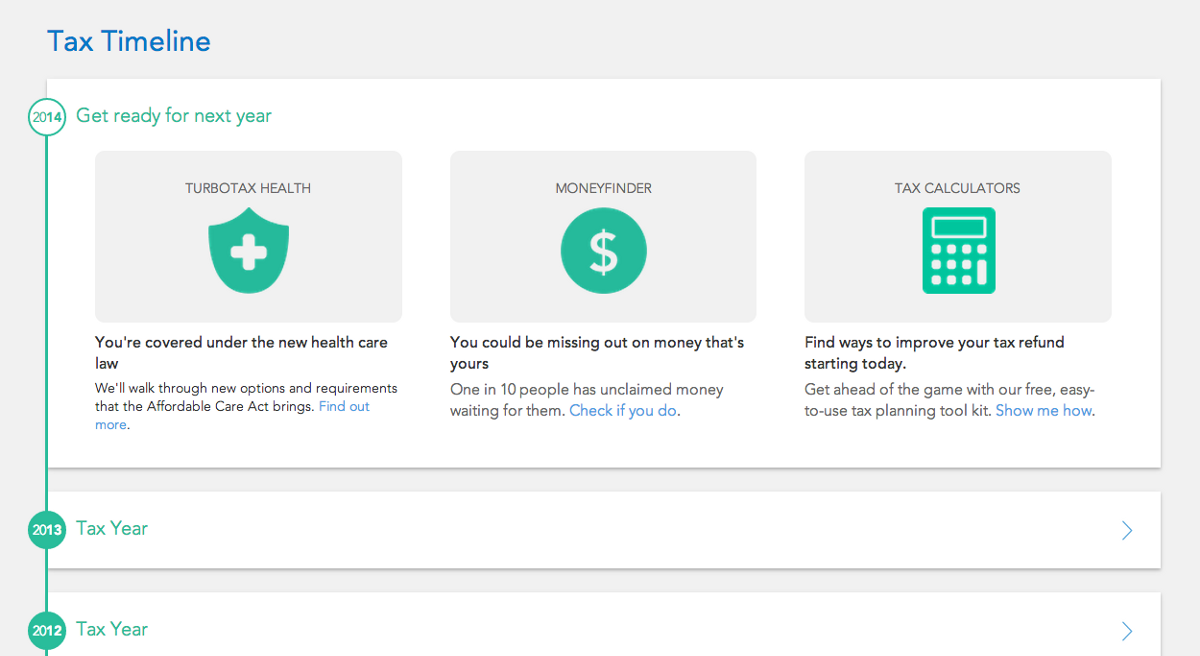 Finally, you have a 3rd less common option: when timeline contemplates steps in the future. This could happen for processes in development where there's a planning. for example, building an app: let's assume you're in a stage where you're building high fidelity mockups, then you'll have all instances between this and final deployment (and further) in the future, while previous instances like research, wireframing and sketching will be in the past. IN this case, you'll need to load the initial (current) spot in the middle, then future instances will be placed to the right, previous instances to the left (and again, the opposite if RTL direction is used).

As for the how to deploy this in a visual way, see the image below: 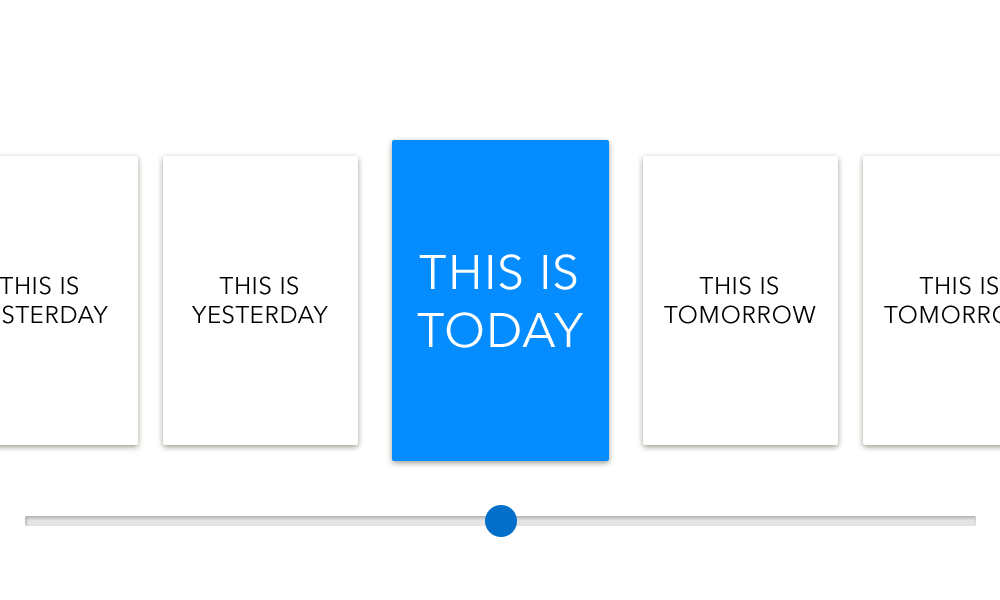 This will apply to any horizontal layout, the important part is to categorize the current instance on a higher level than previous or future instances. While this would represent the 3rd case I mentioned, it also applies to the other options as long as you have moved from the initial instance

If you need some help with visualization approach, take a look to Dribble's timeline tag, all of them dealing with any of the mentioned 3 cases in different ways

Vertical Timeline is the best method to show the data in sequence. It is more intuitive for users.

Horizontal method is used when there is image gallery sort of thing is to be displayed so that that right left gesture performs as next and previous.

If the goal is to display latest updates, and not the whole story from the beginning, where the whole timeline should be also in focus, and the timeline is quite long, I would rather use vertical layout, latest updates on top.

However, if the timeline is short and has to be in focus, it better be horizontal, latest updates on the right. And whereas horizontal scroll is counter-intuitive, horizontal flicking through a stack of cards isn't. So I would treat a timeline as a stack of cards, each card showing one timeline point (see wireframe). This way you will have enough space for the key point content. 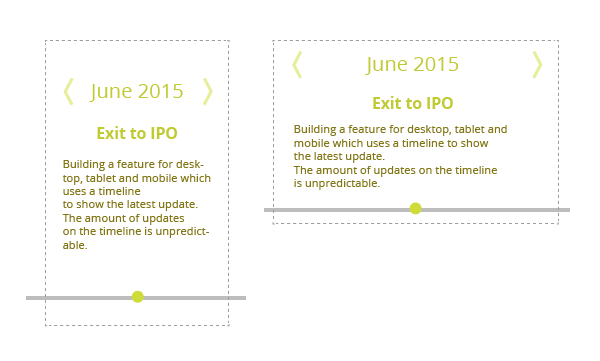 Not the answer you're looking for? Browse other questions tagged info-visualisation desktop-application intuition timeline cross-platform or ask your own question.

2
Which direction gives the best sensation of progress?

4
Representing the presence of short events in a long timeline
7
What's the best way to represent a timeline graphic
1
What control flow can replace vertical (or horizontal) scrolling lists?
4
Displaying overlapping events in a scalable timeline
5
How to display a family tree in a horizontal timeline
7
Using a Timeline in a Responsive Design?
2
Selecting the right units for large timeline charts
3
How to Create Timeline with Dynamic Start/End Dates
4
Distinguishing overlapping event types in a timeline