Should I hide settings behind a settings menu or allow the user to edit inline?

Currently I have a page with settings inline with the information the user is looking for:

However, it makes the rows cluttered:

I was thinking about moving them all out to a separate settings menu:

Clicking settings will bring up a menu like this: 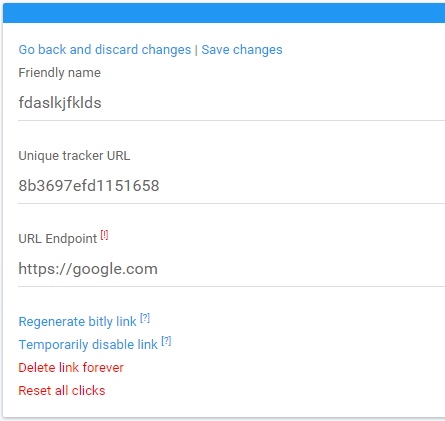 However, that adds an extra barrier the user has to go through to access the settings.

Is it wise to keep the settings easily available, even if it makes the table more cluttered? Or should I hide all the settings behind a seperate menu?

You're asking whether to include the edit function in each setting, or whether to hide them. Here are the most obvious choices you have:

You can probably think of other choices.

From your question, I can see that you're already thinking about the impact of visual clutter on user performance. In addition, I recommend you consider how frequently a user must edit, and whether all users commonly edit. One approach to this is in the book, Designing from both sides of the screen, by Ellen Isaacs and Alen Walendowski.

This book talks about frequency and commonality as a way to assess whether a feature needs to be built, and also how prominent the feature should be in the user interface. The assumption is that since a program has lots of features, and they can't all be in the main UI—because as UX designers we neither want to overcrowd the UI nor overwhelm the users.

This grid is a gross oversimplification of their idea about where to present a feature's controls in the user interface. 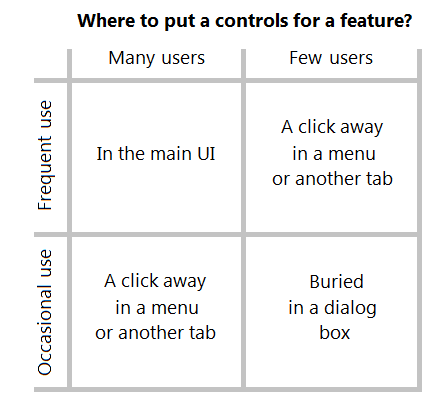 Use the grid to look at the possible treatment for a particular combination of frequency and commonality. For a new feature, you estimate the amounts; for an existing feature, you measure user behaviour. As with any guideline, some other guideline—or some business driver—may take precedence over this guideline, and you may choose not to follow it.

Disclaimer. I want to repeat: the above grid is an incomplete oversimplification. There are more options and nuances that the grid, above, omits. Also, while the basic concept is from Isaacs & Walendowski, these are not their words so any errors of interpretation are mine. :)

0
Should user related data be part of a settings?
1
How do we make immediate saving clear?
2
Research and guidelines for settings, menus and control panels
0
Pre-define bulk upload settings or prompt the user to choose their settings each time they upload
3
Is it ok to hide the full settings until initial onboarding steps are complete?
1
should you hide the main navigation on the account page ux
2
In the main drop-down menu for a logged in user, is it actually useful to have a link to the user's own profile page?
2
Inline edit: Should input fields be Editable by default, or force users to click Edit then Save?
1
How should mouse sensitivity be represented on the settings screen?
0
Consider a scenario where I have setup autopay. In case I want to edit the settings, what should the ideal behaviour be? Should it load an empty form?