What about double click for selection, currently I have design a grid of thumbnails where user can select a thumbnail on double click. 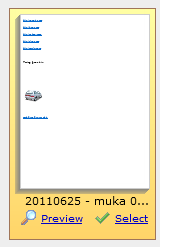 But higher management argues that it should be single click or there should be some buttons for selections. Double click is avoided on the web.

So my question, can I use double click for selection, if yes why and if not what is the best practices/alternative?

Double clicking is more of a problem on touch screen devices (or even just cheaper laptops) where the finger or a stylus is used instead of the easier-to-double-click mouse.

The problem is some people suffer from (Pam Martin's) Double Dysclicksia - as argued by Jef Raskin in The Humane Interface. New Directions for Designing Interactive Systems (Chapter 4.2) From which I quote:

The interface technique called double clicking, that is, tapping the GID button twice within a small time window and without any significant cursor movement between the taps, as an interface technique suffers from problems. You cannot always predict what objects on the display will or will not respond to a double click, and it is not always clear what will happen if there is a response. There is no indication on displayable items that double clicking is supposed to produce a response: The functionality is invisible. The way that double clicking is used in many current interfaces, the user must remember not only which items are double clickable but also how different classes of interface features respond to this action.

The first two burdens on the user could be at least partially alleviated by new screen conventions. The act of double clicking is, however, itself problematical. Double clicking requires operating a mouse button twice at the same location or at two locations in very close proximity and, in most cases, within a short time, typically 500 msec. If the user clicks too slowly, the machine responds to two single clicks rather than to one double click. If the user jiggles the mouse excessively between clicks, the same error occurs. If the user taps the GID button twice in too short a time period, as when trying to select text within a word while working within certain word processors, the machine considers the two taps as a double click and selects the whole word.

A problem arises when the user is trying to select a graphical item that can be repositioned with the GID. Because the GID is likely to move when the user is pressing the GID buttons quickly, graphical applications, instead of reading a double click, may read a drag-and-drop and change the item's position. Similarly, to change the text in a text box, the user may find it necessary to reposition the accidentally moved box and to make the text edit originally intended.

Some of us are unaffected by dysclicksia: These lucky people never miss with the mouse; they single and double click with insouciance and panache, do not suffer from side effects of clicking, always remember what will and what will not respond to double clicking, and can shoot a flying bird with a .357-caliber revolver while driving along a twisty mountain road. But we can't assume that all users are so lucky. We must design for the dysclicksic user and remain aware of the problems inherent in using double clicks in an interface. [1]

"can I use double click for selection, if yes why "

"if not what is the best practices/alternative?"

I generally don't like double-click as an interaction technique within a website/web application. It's not an intuitive thing within the context of a browser. There's also no visual cue. That said, there's no really a visual cue within desktop/OS applications, either, so that might not be a big thing.

It's certainly possible to use double-click - there are JavaScript event handlers that let you capture it and act on it. But unless you include some sort of help/introductory text, or train your users, they're not going to understand that they need to double-click, but no-one generally needs to double-click anything on the web.

Is this all that double-click does? To me, if you simply have a click toggle the selected state of the thumbnail: 1st click => thumbnail becomes selected; 2nd click => thumbnail de-selected. This would be a reasonably conventional interface, I believe, in the field of what you're trying to do.

As well as the general interface issues with double-click as described above, there's one fundamental flaw to your plan: how does the user know they can double-click it?

Almost no web interface has a double-click option. It's not expected. And if you have to write "double-click to select" somewhere on the page then a) it won't be noticed and b) you've proven that your interface isn't self-explanatory.

The answer is always to keep it simple. And a mystery control that the user has to figure out isn't simple.

Is there any other way to select the thumbnail? Your picture has a "select" link on it - does this do the same thing as your proposed double-click?

Not the answer you're looking for? Browse other questions tagged selection affordance click or ask your own question.

15
When is double-clicking appropriate for the web?

7
Best way to give user two controls (expand and select) on a single object
5
Best Practice for navigating to details page based on a grid selection
4
Mouse-click modifier keys for selection in unordered collections
0
Quick way to reach the edit form in a wiki: alternative to double-click?
3
Should I ever delay handling a click event in anticipation of a double-click event?
3
Manual / Auto Refresh and users' selection
3
Left-click, right-click, and double click events for web application
2
What is a good flow for selecting an item from a list and populating some fields in a pane with the item info
10
Should we use check boxes or not and select rows on click
5
How should double-click (to select text) on a space being handled?