I've been staring at this design for way too long and I need an outside view.

These are not stacked line graphs (a no-no in data vis) but two graphs occupying the same space. Does the shaded area count as non-data pixels? Has Stephen Few said anything on this topic? 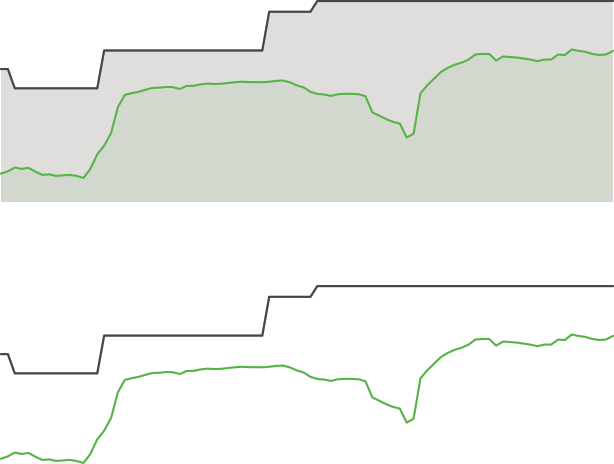 It has already been pointed out in the comments, but I'll provide an answer to elaborate on some of the points made.

As you know, line graphs connect data points that have a relationship between successive values, such that taken as a whole they can reveal trends or patterns over another variable (generally temporal like time). If your focus is on the actual data values and the trend, then shading the area underneath will draw focus away from it unnecessarily (as Evil Closet Monkey pointed out).

You can also consider whether there is any relationship between the two lines that could be revealed by shading (e.g. the intersection between the areas beneath the two lines might have some meaning), and you may want to highlight where it is the narrowest or widest by creating a solid block of colour.

Merrily has pointed out the Wall Street Journal Guide recommending only shading below a line with a zero baseline, and I believe that's because it is easier for the audience to process something that is from 0 to a certain magnitude. But again I should point out that these rules are not hard and fast, and need to be applied to suit the data you are trying to present.

Lastly, I would also consider not putting both lines on the same graph unless there is a good reason (if you were going to shade them), as they seem to behave rather differently and if there is meaningful comparison to be made it can still be done if they were placed side-by-side or top-to-bottom.

You can always search on or post a question to Stephen on his forum and see what he says, if it is that important to get an authoritative answer.

Not the answer you're looking for? Browse other questions tagged info-visualisation data charts visual-design graphs or ask your own question.