Ask Question
Asked 6 years ago
Active 6 years ago
Viewed 3k times
9
Closed. This question is off-topic. It is not currently accepting answers.

Would appreciate help on this issue. We plan to reconstruct our old petrol station. At present, it has one single row of pumps, so all cars have to move in queue or bypass each other.

New design will have pumps in paralel ("islands" with one pump at each island), so cars will wait less in the queue. I want to design 3 islands in paralel (so 6 cars can fill up simultaneously), while management believes two islands (4 cars simultaneously) is sufficient. I want 3 islands, because just after our petrol station, there is a competitor's one, so if a customers drives in in our petrol station and sees all the pumps are busy, he/she will give up and just leave us to get fuel at competitor...

How can I justify this demand, is there some research that shows how long are people usually willing to wait at petrol station before leaving, and to link it to expected/observed traffic frequency and average sales at this specific petrol station?

I have found this topic: How could petrol forecourts be designed to improve efficiency? , but it is not relevant for my question - I don't need to decide the layout of islands, I know how it will look like, but I need to decide their number, 2 or 3.

I don't know where you might find the sort of specific data you're looking for; if it exists, it's likely to be proprietary, internal research done by petrol companies (maybe you could ask your supplier?). But I think you'd need to be cautious with that data anyway, because it's bound to depend a lot on your specific situation.

There's no doubt that, all things being equal, people will go for the petrol station with 6 pumps over the one with 4. They'll probably do that even when the roads are quieter, just because it's nice to have more space to yourself. However, this assumes your customers know about the alternatives; if they're from out of town, and don't know where the next petrol station is, I doubt many of them will risk the hassle of leaving and finding somewhere else just to save a couple of minutes of waiting. And of course there are lots of other design issues specific to your location, like, how easy is it to get in and out at busy times? Would three islands make the forecourt feel cramped? etc.

If you're confident that 6 pumps is better, then you can use the data you do have to make your argument. Say the marginal accounting cost of two extra pumps is £10,000/year, and an average visit is worth £5 (I have no idea). Then you need to persuade people that the extra pumps can attract 5 or 6 extra customers per day. If you have detailed sales data from running with 4 pumps, there are ways to estimate how many customers you've been losing by not having more pumps, for example: 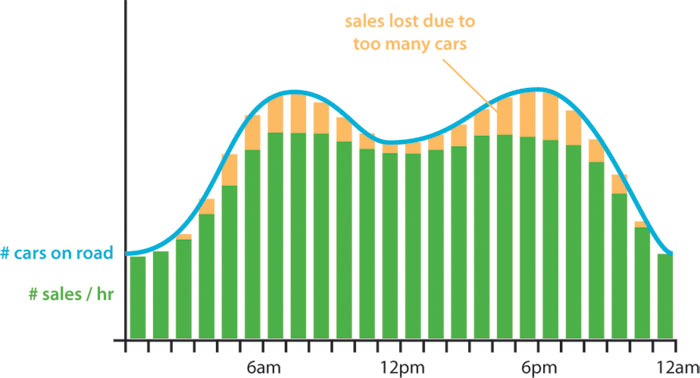 I.e. you may be able to show that when the forecourt is full, fewer people stop to fill up (with the usual caveats-- correlation is not causation).

There are more rigorous ways to analyse this, depending on what data you have, but you don't want to get too mathematical if the goal is to persuade people...

Drivers give up and leave?

I don’t think there is a magic number of minutes of “how long are people usually willing to wait at petrol station before leaving.” However, in the simplest but realistic case, the competitor’s pumps are visible from where the driver would turn into your pumps. In this case, there is no leaving after waiting. The driver will see where there are available pumps, estimate the wait time at each station, compare it to other costs/benefits at each and judge which is best.

Frankly, even if drivers can’t see the competitor, I don’t see drivers waiting in line then giving up and leaving your station. It's certainly not something I've witnessed, except maybe in an extreme situation. Drivers are going to see the line at your station, take a best guess about the line at the competitors based on previous experience, and commit to one or the other. It doesn’t make sense to leave a line one is in to go to another –that would “waste” whatever time one had invested already just to start over from scratch. It’s the same phenomenon that makes users to dig deeper and deeper into unnecessarily complex menu hierarchies or websites -they won’t give up after three clicks, or whatever, even though it’s a lousy user experience. The only time users/drivers give up is if they see something that tells them their initial judgment was wrong (e.g., the information scent has run out, or the petrol station has caught fire).

Calculate the impact of m pumps, all else being equal

So let’s assume there is no giving up, only driving pass (or through) to the competitor. In the still simplest-but-realistic-case, the other cost/benefits are equal for the stations. The price of petrol at each station is the same (as tends to be the case with competition). Let’s also say it’s equally convenient to get to either petrol station (e.g., no u-turns), and the drivers perceive no difference in the petrol from each station. In such a case, I think you can assume that any time all your pumps are in service (and the competitors are not), then drivers will go to the competitor.

Determining the effect of the number of pumps is now a simple queueing theory problem. For a given arrival rate of cars needing petrol L, time to fill the petrol tank T, and number of pumps m, you can calculate E, the probability that all your pumps are in use. That is also equal to the proportion of time that all your pumps are in use. Let D be the duration of time that cars arrive at rate L. Then, E * D is the amount of time when all your pumps are full, and all subsequent incoming cars will thus go to the competitor (at the continued incoming rate of L). Therefore, E * D * L is the number of customers you lose with m pumps. Compare m with m + 1 to see what difference an added pump would make.

(That's the worse-case scenario –it assumes the competitor doesn’t get maxed out too. It may be more realistic to also model your competitor's queue and assume that when the queue size at each station is equal, drivers choose either the first station they come to (yours) or a station at random.)

Calculate the number of pumps, all else not being equal

If the cost/benefits are not equal, then it’s an economic problem that I’d say it's going to depend on your local population, and still not be a single magic number. For example if the price of petrol is more at the competitor, then it depends how much time is worth to your drivers. That, in turn, depends on how much time and money they have. A neighborhood where people have a lot of time but little money are going to have drivers who are willing to wait longer than otherwise. Do some market research for your specific location, and you should be able to determine the number of minutes drivers are willing to wait to save X amount of money to fill their tank. Then you can use queueing theory to determine the number of pumps necessary to achieve that “service level.”

BTW, the Natick Service Plaza on the Massachusetts Turnpike uses the service station design you’re proposing, as shown in the Google Streetview image below (coordinates 42.311689, -71.365003). So it's probably good to know the design can in fact work as intended in the real world.

It may be worthwhile doing some qualitative market research with local car drivers.

Your improved filling station is going to fit into an 'eco-system' of local filling stations, so local car drivers will already have preferences as to which local stations they use. People are also creatures of habit and will tend to stick to suppliers they are happy with.

These preferences may be driven by a complex mix of factors which will include both the physical issues relating to the filling station (ease of fuelling and parking); the cost of the fuel itself; other offers (what is sold in the shop); and soft issues - such as the time needed to queue to pay and friendliness of the staff.

( You might find that you aren't actually competing the nearest physical filling station at all but one which is further away ).

Qualitative research should provide some pointers as to what people look for when choosing a filling station (for example the importance of queuing to fill time as against queuing to pay time )- as well as giving you data on who you are actually competing with in your neighbourhood.

Not the answer you're looking for? Browse other questions tagged design physical efficiency or ask your own question.

9
How could petrol forecourts be designed to improve efficiency?

1
Newspaper design
9
How could petrol forecourts be designed to improve efficiency?
17
Board game design: Which design is clearest to indicate failure?
6
Documenting Design Decisions?
4
UX to consider on a business card design
0
What is a good way to design a selector menu for different product lines?
1
Efficient vs Elegant design
12
Metro station stop design to prevent people from commiting suicide
2
Inventory Information, how to design