What are the best practices in designing a 404 error page?

I read so many blogs and articles regarding this. Some says about using fancy images , when some days about sticking to the basics.

Are there any guidelines regarding this? What are the best practices? Which of the following details are wrong or to be followed?

Images to be used

Any useful guidance is appreciated

Whom to put the blame on?

In the error message should we specify that the page you typed not exist (putting the blame on the user) or some other messages taking the blame on ourselves even if the reason might be a wrong url ?

Redirection: should I redirect, and if so, where?

Not unless you're pretty confident that you know where the user actually wanted to go (and in most cases, you won’t). It’s better to give them the explicit error message, and let them decide where to go next.

If the user is trying to reach an old URL which has been moved, it's fine to redirect them to the old URL. But you should really be using a 3xx redirect instead of a 404.

Should the page explicitly state 404: Page not found?

I like having the 404 on the page, because I think many people know what that number means, and it acts as a shorthand for the error. But that's just a preference – for example, Apple and Microsoft's 404 pages don't mention it.

There should definitely be phrasing to the effect “the page was not found”. That's a common and well-understood message.

How should the page designed?

It should fit in with the rest of your site. You don't want to confuse people into thinking they've accidentally gone to a different site, rather than finding a missing page on the site they were actually looking at.

Who should be blamed?

Nobody. The simple message “The page was not found” is neutral and accurate.

It's not appropriate to point the finger of blame; it would be easy to get it wrong.

The URL the user types in can give you information about where they wanted to go. If you're careful, you can use this to redirect or suggest an alternative. (This assumes you don't have lots of similar URLs, and that you have some sort of finite list to compare to; this won't work on all sites.)

Those aren't appropriate for all sites, but I think they're interesting ideas, and potentially a bit more useful than a generic error page.

I'm not saying it's perfect, but we launched a new 404 page this year and we included options asking people to give us feedback when they find a broken link.

Consequently we get a few emails a week which are helping us tidy up our site and fix problems.

We also included an obvious search box to try and help people find what they were looking for. We're revamping our sitemap but once that's done we'll link to it again from here.

I do like the Brett Terpstra solution (suggesting what page you might have been after), but I think that would have been hard for us to code, based on our CMS... 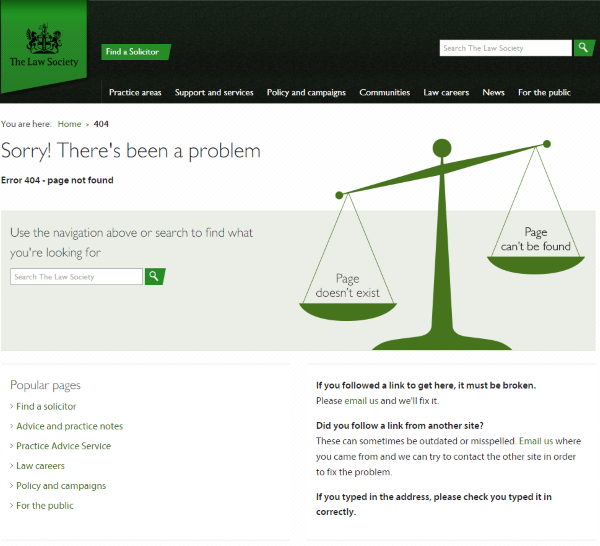 I always appreciate a witty 404 page since not only does it convey that the Page Does Not Exist but also contributes to an experience that relates to your brand.

For example, I am a Part Time employee at Haptik and they have the No Calls, Only Text approach to improve Customer Service.

Hence, here's what they have done to theme their 404 page: 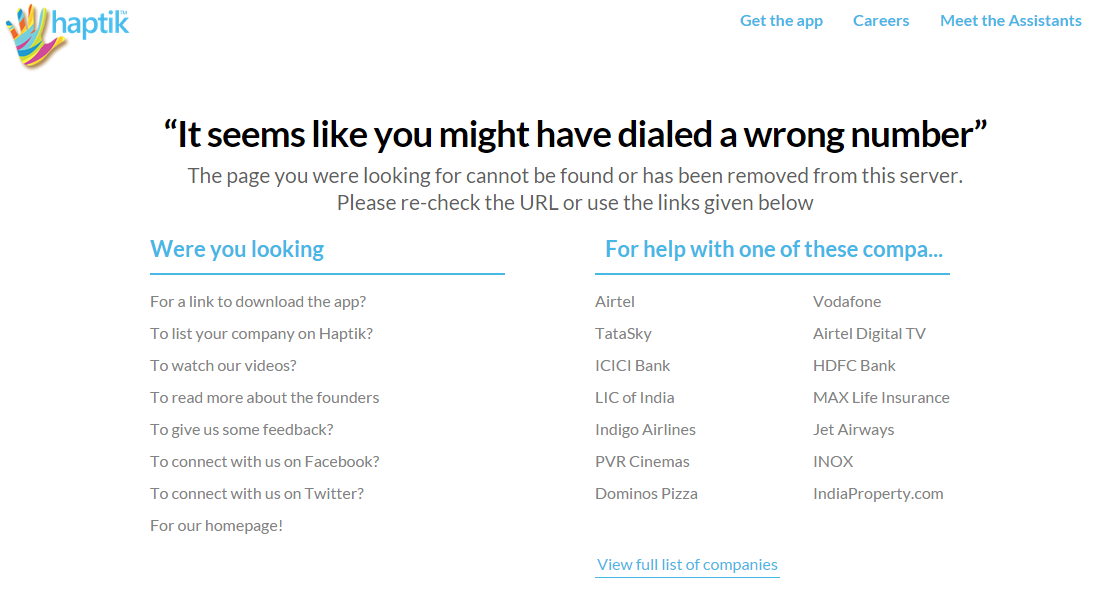 Observe the number of options it gives you below.

The goal is to convey that the Page does not exist, and you can use various metaphors to say that, but it's at best interest to leave a hint of "Page not found"

As a good design pattern, auto-redirection should be avoided. If you can have the User navigate to a section he wants by providing options, why auto-navigate to anything?

A good sense of how users end up on your website and what they mostly look out for gives you the advantage on theming the 404 page that way by providing multiple options they would want to go to in chronological order of their page-hits.

Everyone does this differently, and creativity is what should be your aim when creating a strong brand recognition.

I will answer this from a human perspective since empathy is something that we strive for when working on solutions for users.

Assumption: Three of your friends came visiting after they heard that something bad happened to you.

Website = YOU that is having a bad day or disappointed or lost something and needed encouragement. 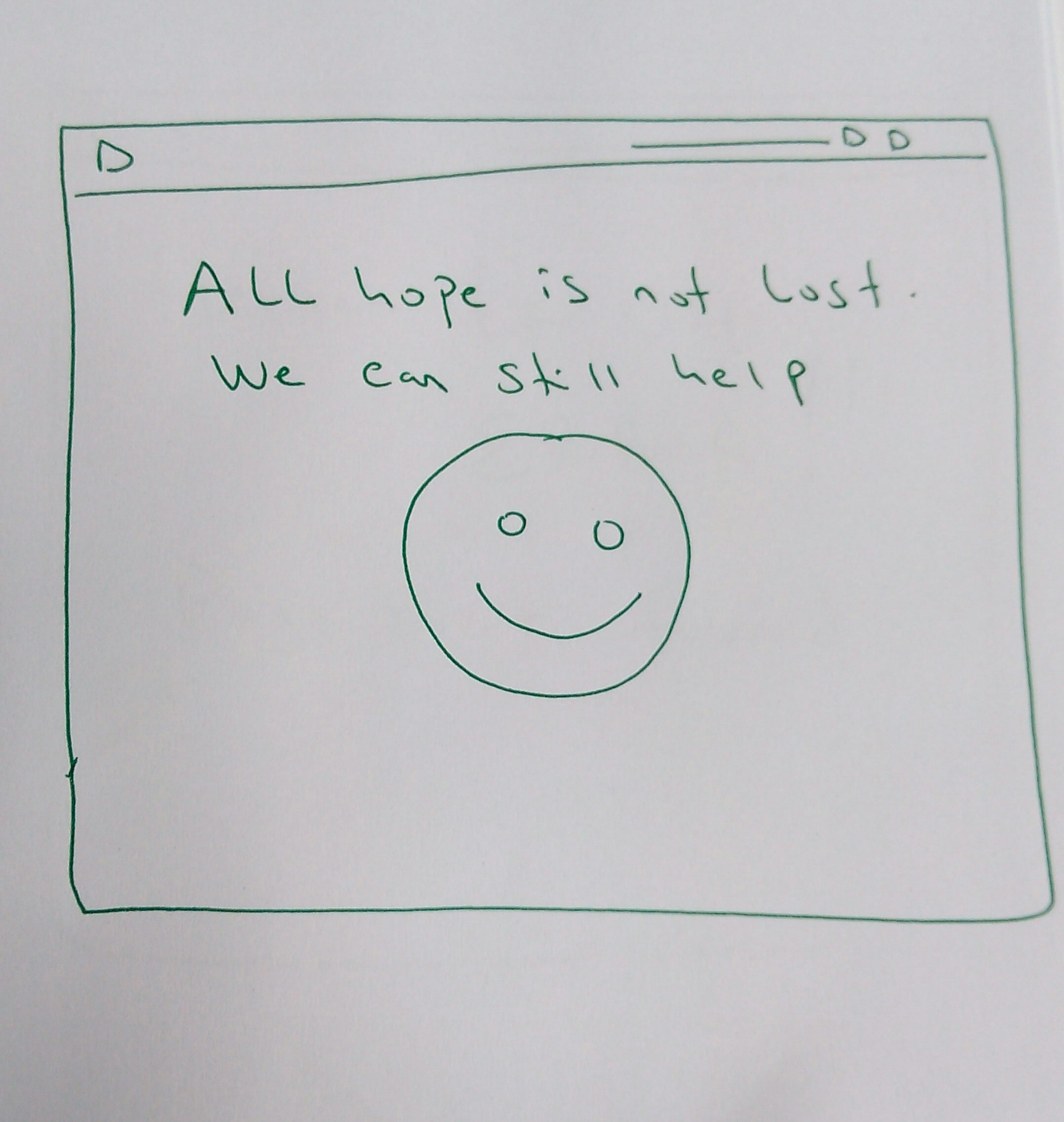 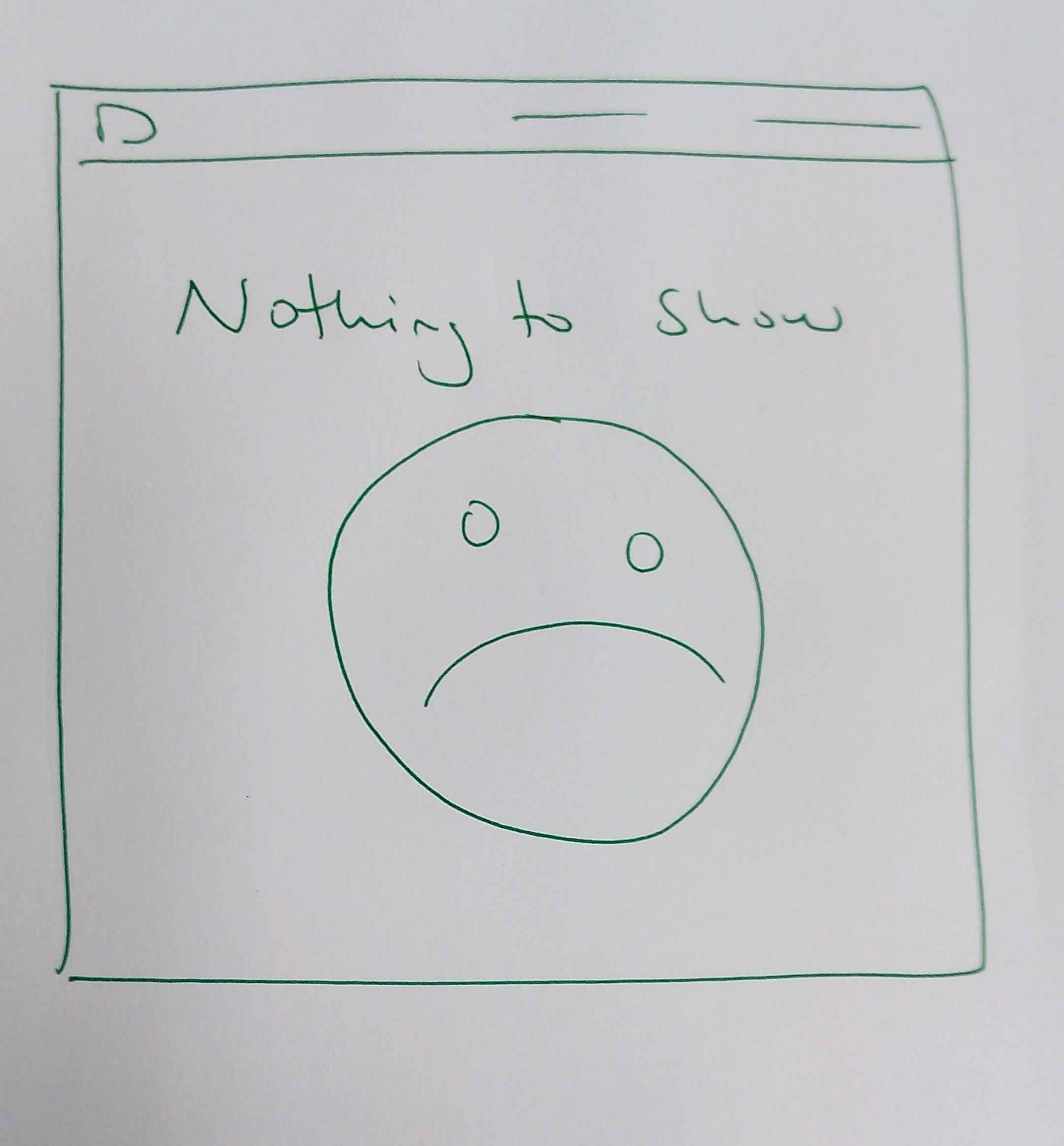 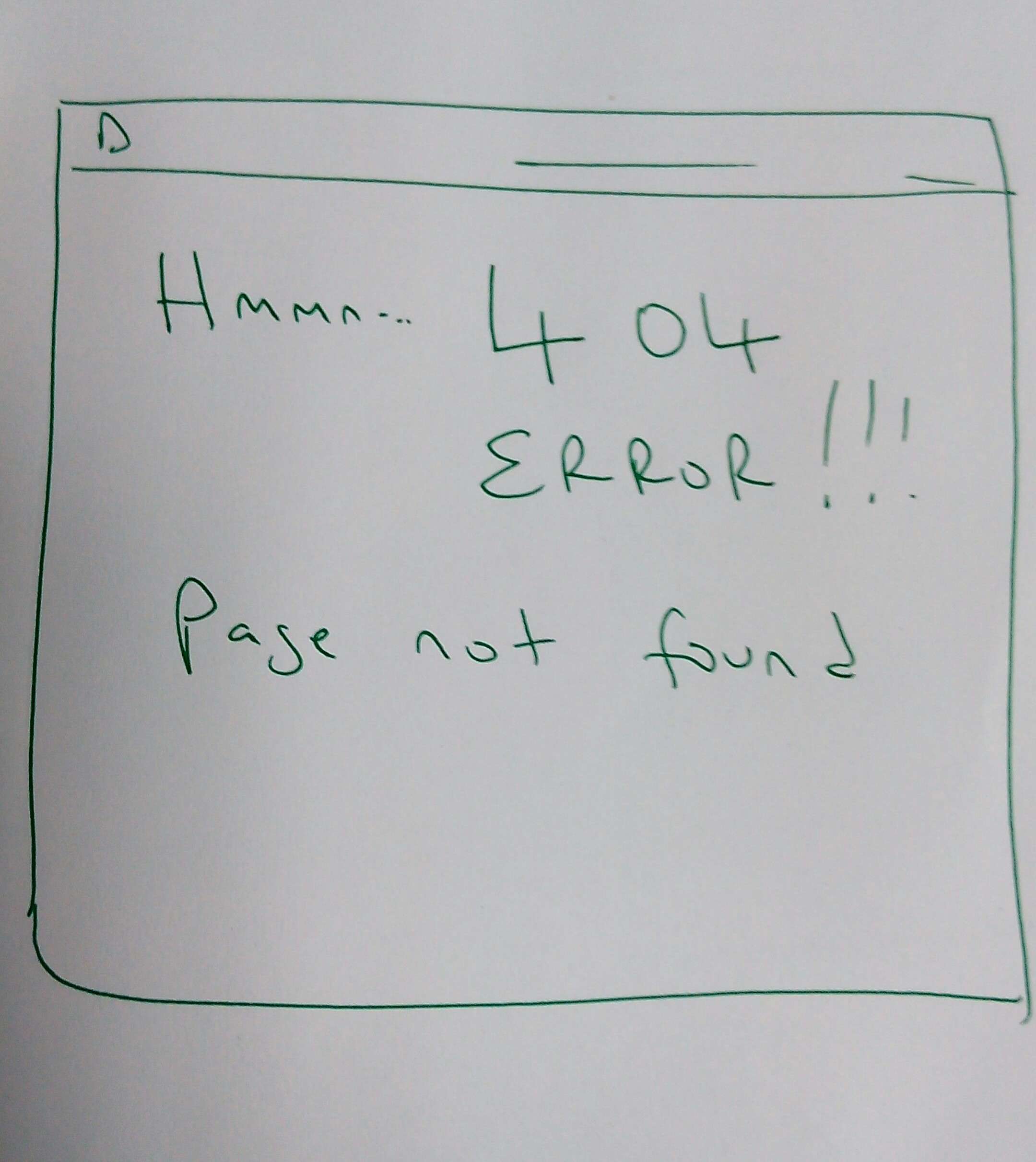 Which of your image friends will you give a hearty thank you or call later for helping you remain positive when all becomes well?

I will leave you to answer that question. :)

To paraphrase Steve Jobs, design is 'how it works'.

A 404 page is something you want to avoid, therefore the most important thing with a 404 page is to design it in such a way that you know it has been shown and can then do something to make sure it is not being shown in the future. By this I mean logging. Yes, this will be in the server logs already but fixing problems from the server logs might not be that easy. If you are generating the 404 from an index.php point of entry then you can do something to log the 404 page, so, when it is hit you have pertinent information in a place where you can review matters easily.

A well designed website really does not 404 that often, the design is 'prevention rather than cure' when it comes to 404. This being the case you can keep it simple and to the point, so, if it does get shown it is clear to the user and not wasting your bandwidth on bots or other sources of incorrect urls. That means not bothering with CMS blocks of helpfulness, search boxes and other trimmings, just the 'page not found' with a link to the homepage will suffice (The homepage being known to load and known to have site navigation).

It is that simple. Yes you can add a simple image or have your CSS style it up, but other than that, save the hard work for the content you do wish for your visitors to see and fix those broken links in your content or in some .htaccess style rewrites before Easter-egging the 404.

I use 404 pages combined with humor to make a better connection with the user. I like to provide some helpful links and guidance.

There are many good examples of eCommerce 404 pages full of personality that attempt to increase conversions - some even with product recommendations. Perhaps they consider that the same as walking down the wrong aisle in a store.

Unless you are able to take them to a new location that will display the content they were expecting to see, I think that you should simply display the standard 404 not found error, with possibly some instructions on how they may be able to find what they're looking for.

I like the idea of combining humor with a 404 redirect. I am thinking of displaying our latest blogs below the message to make for engaging copy. Our current 404 page looks really bad and has a high bounce rate- http://www.sevenatoms.com/article_writing_services.shtml

Not the answer you're looking for? Browse other questions tagged errors 404 or ask your own question.

9
Messaging a user success and error messages at the same time
2
Do people expect to mistype their passwords?
4
Links on a 404 page: simple navigation or natural-language help?
3
Is it a good idea to hide logout button with error/warning message?
3
Refreshing 500 error page
4
Should 404 page use different layout from the rest of the site?
21
Necessity of writing the number "404" on a 404 page?
2
Can multiple error screens (e.g. 401, 404) be grouped into one catch-all page?