Is there a name for commonly accepted significance on iconography?

Just to illustrate what I mean, take a look at this image: 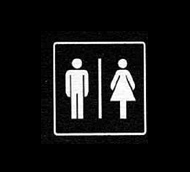 This is a commonly accepted sign for bathrooms. Note that there are no references to a bath or toilet, but a man and a woman shape.

Now, I'll use another man and woman shape, very similar in style, yet with some differences: 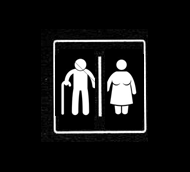 I think most people will have problems trying to define what does this icon mean. And yet I'm using same style and the shapes of a man and a woman.

So this is my question: is there a name that illustrates these concepts of commonly accepted significance and hard to understand significance? I mean, something like affordance, but in terms of semiotics.

The closer I got to this is intuitiveness as found in Jakob Nielsen's Icon Usability for the 1995 Sun Microsystems' Website , but I'm not completely sure this word describes what I mean since IMHO this concept is not bound to intuitiveness, but to cultural development

Please note I don't want to argue about the validity of this acceptance or if I need labels or anything else. Just the name (or lack of it) for these concepts

From the design POV we could say these are signifiers and when they are used consisently we say they are a standard or just common, so I think it will be okay to called them standard signifiers.

Frequent and repeated use of a particular signifier will increase the perception of familiarity of that signifier from users' POV.

Un/perceptible signals are terms used in the famous book The Design of Everyday Things from Donald Norman, an important referent in the UX community:

Affordances define what actions are possible. Signifiers specify how people discover those possibilities: signifiers are signs, perceptible signals of what can be done.

For me, the term signifier refers to any mark or sound, any perceivable indicator that communicates appropriate behavior to a person".

So maybe we could just say good(bad) signifiers (good meaning effective, which does its job) or common/standard (uncommon/non-standard) signifiers (standard implying the highest possible rate of familiarity, thus "recognizability").

Thanks to Rewobs answer, I got the clue and found the answer. Basically, I got "lost in translation" and used the significance word, which is close, yet not exact. Trying to learn on signifiers, I got to the following pages:

Which remind me of my semiotics classes, specifically Saussure's significado/significante (in my original language, which in English is signifier/signified, note the small difference!) and the relations between sign and symbols

So looking for that concept, the first result I got was Semiotics for Beginners which actually had the exact answer and it even uses the bathroom guy as example.

Peirce and Saussure used the term 'symbol' differently from each other. Whilst nowadays most theorists would refer to language as a symbolic sign system, Saussure avoided referring to linguistic signs as 'symbols', since the ordinary everyday use of this term refers to examples such as a pair of scales (signifying justice), and he insisted that such signs are 'never wholly arbitrary. They are not empty configurations'. They 'show at least a vestige of natural connection' between the signifier and the signified - a link which he later refers to as 'rational' (Saussure 1983, 68, 73; Saussure 1974, 68, 73). Whilst Saussure focused on the arbitrary nature of the linguistic sign, a more obvious example of arbitrary symbolism is mathematics. Mathematics does not need to refer to an external world at all: its signifieds are indisputably concepts and mathematics is a system of relations (Langer 1951, 28).

For Peirce, a symbol is 'a sign which refers to the object that it denotes by virtue of a law, usually an association of general ideas, which operates to cause the symbol to be interpreted as referring to that object' (Peirce 1931-58, 2.249). We interpret symbols according to 'a rule' or 'a habitual connection' (ibid., 2.292, 2.297, 1.369). 'The symbol is connected with its object by virtue of the idea of the symbol-using animal, without which no such connection would exist' (ibid., 2.299). It 'is constituted a sign merely or mainly by the fact that it is used and understood as such' (ibid., 2.307). It 'would lose the character which renders it a sign if there were no interpretant' (ibid., 2.304). A symbol is 'a conventional sign, or one depending upon habit (acquired or inborn)' (ibid., 2.297). 'All words, sentences, books and other conventional signs are symbols' (ibid., 2.292). Peirce thus characterizes linguistic signs in terms of their conventionality in a similar way to Saussure. In a rare direct reference to the arbitrariness of symbols (which he then called 'tokens'), he noted that they 'are, for the most part, conventional or arbitrary' (ibid., 3.360). A symbol is a sign 'whose special significance or fitness to represent just what it does represent lies in nothing but the very fact of there being a habit, disposition, or other effective general rule that it will be so interpreted. Take, for example, the word "man". These three letters are not in the least like a man; nor is the sound with which they are associated' (ibid., 4.447). He adds elsewhere that 'a symbol... fulfills its function regardless of any similarity or analogy with its object and equally regardless of any factual connection therewith' but solely because it will be interpreted as a sign (ibid., 5.73; original emphasis).

Turning to icons, Peirce declared that an iconic sign represents its object 'mainly by its similarity' (Peirce 1931-58, 2.276). A sign is an icon 'insofar as it is like that thing and used as a sign of it' (ibid., 2.247). Indeed, he originally termed such modes, 'likenesses' (e.g. ibid., 1.558). He added that 'every picture (however conventional its method)' is an icon (ibid., 2.279). Icons have qualities which 'resemble' those of the objects they represent, and they 'excite analogous sensations in the mind' (ibid., 2.299; see also 3.362). Unlike the index, 'the icon has no dynamical connection with the object it represents' (ibid.). Just because a signifier resembles that which it depicts does not necessarily make it purely iconic. The philosopher Susanne Langer argues that 'the picture is essentially a symbol, not a duplicate, of what it represents' (Langer 1951, 67). Pictures resemble what they represent only in some respects. What we tend to recognize in an image are analogous relations of parts to a whole (ibid., 67-70). For Peirce, icons included 'every diagram, even although there be no sensuous resemblance between it and its object, but only an analogy between the relations of the parts of each' (Peirce 1931-58, 2.279). 'Many diagrams resemble their objects not at all in looks; it is only in respect to the relations of their parts that their likeness consists' (ibid., 2.282). Even the most 'realistic' image is not a replica or even a copy of what is depicted. We rarely mistake a representation for what it represents.

Semioticians generally maintain that there are no 'pure' icons - there is always an element of cultural convention involved. Peirce stated that although 'any material image' (such as a painting) may be perceived as looking like what it represents, it is 'largely conventional in its mode of representation' (Peirce 1931-58, 2.276). 'We say that the portrait of a person we have not seen is convincing. So far as, on the ground merely of what I see in it, I am led to form an idea of the person it represents, it is an icon. But, in fact, it is not a pure icon, because I am greatly influenced by knowing that it is an effect, through the artist, caused by the original's appearance... Besides, I know that portraits have but the slightest resemblance to their originals, except in certain conventional respects, and after a conventional scale of values, etc.' (ibid., 2.92).

Guy Cook asks whether the iconic sign on the door of a public lavatory for men actually looks more like a man than like a woman. 'For a sign to be truly iconic, it would have to be transparent to someone who had never seen it before - and it seems unlikely that this is as much the case as is sometimes supposed. We see the resemblance when we already know the meaning' (Cook 1992, 70). Thus, even a 'realistic' picture is symbolic as well as iconic.

Iconic and indexical signs are more likely to be read as 'natural' than symbolic signs when making the connection between signifier and signified has become habitual. Iconic signifiers can be highly evocative. Kent Grayson observes: 'Because we can see the object in the sign, we are often left with a sense that the icon has brought us closer to the truth than if we had instead seen an index or a symbol' (Grayson 1998, 36). He adds that 'instead of drawing our attention to the gaps that always exist in representation, iconic experiences encourage us subconsciously to fill in these gaps and then to believe that there were no gaps in the first place... This is the paradox of representation: it may deceive most when we think it works best' (ibid., 41).

In short, while not widespread in UX, the correct answer is signified, although signifier could be more appropriate for people more related to technological systems than semiotics

Not the answer you're looking for? Browse other questions tagged icons terminology semiotics or ask your own question.

6
Common/accepted name for "dropdown menus" and related kin?
1
Iconography for verbatim vs. paraphrase
2
Feedback required on Iconography with labels for Payment Method
0
Is there a short/common name for form-based user interfaces?
2
Is there a standard, or widely accepted icon or glyph for 'copy to clipboard'?
8
Best practices for figurative, non semantic iconography
0
Is there a name / descriptor for "elevated backgrounds"?