In my opinion steering wheels for automobiles are a bad UX. They seem to be a control that are here for legacy reasons only and were not thought out in the context of new age technology. What would be a better solution for steering an automobile?

Why steering wheels are a bad UX

The steering wheel rotates in a circular motion around the x-axis:

While the tires pivot around the y-axis:

The car as we intend it to turn also pivots around the y-axis. If the car would actually maneuver in the same manner that turning a steering wheel did then it would perform a barrel roll.

Depending on your speed and vehicle you may have to turn the steering wheel a different amount to get the car to turn to a certain degree, but in many cases the amount of turning required is not able to be accomplished with just one hand. You must grip the wheel with both hands and continuously "feed" the other hand with more wheel to grip. This is both unsafe as you could lose grip and inefficient as it requires so much effort for a task that must be accomplished regularly.

Why do we still use them then?

I assume the main reason we use this type of steering wheel is it is just standard convention. Steering wheels have been in place since the advent of the automobile. There have been many rules and regulations created about cars and how they operate to make them safe for drivers so presumably it would be no small task to reinvent the wheel (see what I did there..). But with power steering becoming more prevalent I believe it would be fairly easy to adapt that technology to implement any type of steering control we wanted. So I ask:

What would be a good replacement for the traditional steering wheel?

I went through a couple of papers on Human-Vehicle Interaction and some other articles on this topic. I would like to answer this question by highlighting upcoming replacements for the traditional steering wheel and why automobile manufacturers still prefer steering wheel over some other radical technologies.

Following is my research summary:

Steer-by-wire systems (SbW) are electronic steering systems which offer designers the opportunity to tune the steering feel to the context and preferences of the drivers, more so than conventional mechanical steering systems. This is analogous to the fly-by-wire system used in the aviation industry. 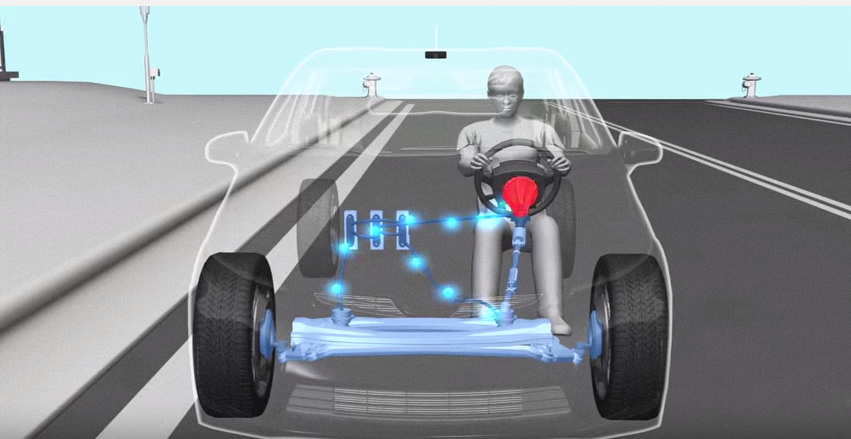 Simply put, the steering wheel talks to a computer, and the computer talks to the wheels. Sensors in the suspension and software combine to help the steering wheel simulate a sense of the road.It will take less effort to turn the wheel at low speed, allowing you to conquer skinny parking spaces.

Force feedback on the steering wheel gives a sense of position and control of the vehicle to the driver. Here's a related video:

It's costly and can be hacked.

A few car manufacturers have tried the idea of using joysticks in concept cars instead of a steering wheel. Mercedes-Benz showed off a drive-by-wire center-mounted in the Saab Prometheus in 1993 and F200 in 1996. The car had a center-mounted joystick which improved safety by not having a steering wheel in the way in case of an accident. 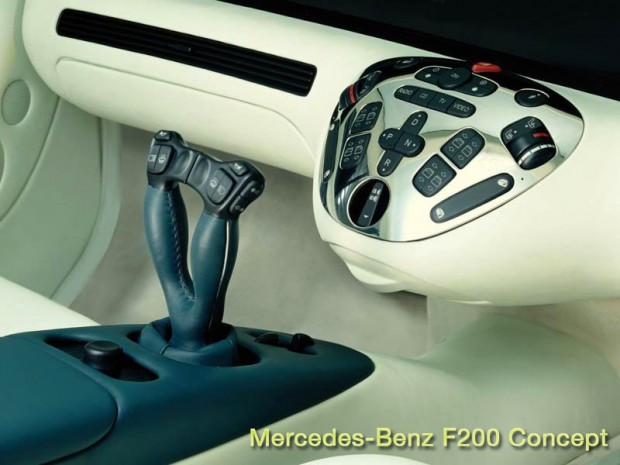 However, it didn't go down that well. ArsTechnia summarized the problem in this article:

The issue comes down to precision and feedback. For one, a wheel with several turns from lock to lock allows for much more accurate control than a stick with an inch or two of travel from side to side.

For aircraft, that isn’t much of a problem, but aircraft don’t have to parallel park, squeeze through busy city streets, or cruise along in the middle lane of a motorway with traffic on either side. Given the need for precision, the value of feedback as part of a pleasant driving experience can’t be overstated.

It's much easier to channel feedback from the front tires to a steering wheel for the same reasons the wheel is more precise than a joystick. So even if we didn’t have to account for an entire installed user base that's used to a steering wheel and pedals, the chances of seeing a different solution on our roads seems extremely remote due to the current setup's accuracy advantages. (Like the wheel, pedals are in no danger of disappearing any time soon even if the cars modified for paraplegic drivers have shown it’s quite possible to drive without using one’s feet.)

IMO, joysticks are a bad choice. Joysticks are senitive as compared to a steering wheel and a small nudge can lead to undesired results. It could be locked, but this will lead to more complexity. Quoting somebody from Quora:

A steering wheel also acts as a brace of sorts, a very physical device that anchors you in the car and quite literally attaches the driver to the wheels. This is very important when driving over rough surfaces or bumps; with a joystick, there would be little to brace your arms and small bumps could cause big reactions in the hand, thus causing the driver to lose some control.

Steering wheels have a long history and they've become an integral part of the driving system. It's tough to imagine an entirely new type of control for driving. As I found in the research, most car manufacturers are in favor of technically improving the steering wheel instead of replacing it completely. For example, the steering wheel as a touch interface is an active research topic in human-vehicle interaction. There's another interesting paper about content rotation on steering wheel displays. Quoting from the paper:

The steering wheel is a promising space for the integration of displays since in the car there is very limited space for integrating interactive modalities for the driver that are close to the preferred field of view as well as in an easy to reach position. When the wheel is turned, the screen content could change its orientation to increase the readability and therefore reduce the distraction from the road

I think rather than a new control, we will have a much better steering wheel in cars.

I think besides the fact that we have it for over a century,the steering wheel has multiple advantages.

I believe the reason why the Steering Wheel has become a standard convention is because of its early invention back in the year 1903.

That's 112 years of the Steering Wheel!

It has become a family recipe. The world being the family. With people so accustomed to drive a car this way for 100+ years now, it's become an everyday custom.

People are so accustomed to Steering Wheels now, that they find it hard to move on to a better reasonable solution, primarily because they don't need to.

Thinking of it through a Business Mind, perhaps Startups have come up to improvise and/or provide an alternative to the Steering wheel, looking for an investment. (Since, the primary concern of anyone with an invention will be to have enough capital and contacts to do proper marketing, education and global manufacturing and distribution.)

Investors will always think of this as a Risky idea, because a Steering Wheel might not be the reasonable solution to the problem, but it has been accepted globally.

Educating the common man will be practically impossible and expensive because they'll need a very good reason to make them switch from the traditional Steering wheel, and honestly it will need to be pre-installed by car manufacturers who won't do it until they have then concept proven, which will be really hard to do.

I appreciate your question and do not understand of the downvotes.

There may be many better solutions to this problem, but what I think is the solution to get any of them forward to replace the traditional steering wheel is: Educating the End-Users and Proving the Concept.

Why steering wheels are a bad UX

They're not. They've been used for about as long as the car has been around and centuries prior to that on ships. It's good UX for no other reason that it's completely ubiquitous.

Why do we still use them then?

Because they work. And they're ubiquitous. And we're perfecting it over about 100 years. Modern car steering is smooth, effortless, and comfortable. Airbags have made them safer in a crash.

What would be a good replacement for the traditional steering wheel?

Likely nothing. People want to steer cars with steering wheels.

The likely next big change will just be getting rid of the driver all together with auto-driving vehicles.

From a purely UX perspective, the steering wheel is a good default choice in any vehicle being designed today for the above reasons. Might there be something better? Maybe. But you're not likely going to find it here in a Q/A format. :)

Not the answer you're looking for? Browse other questions tagged interaction-design physical user-centered-design cars or ask your own question.

5
How to inform user that he can use mouse wheel to interact with an object?
4
Controls on moving controls?
2
Mouse-wheel scroll interaction for navigating through pages
65
Touchscreens in car consoles
0
Alternative website's UI/workflow design to avoid ShowModalDialog()
2
A better alternative to asking secret questions and answers when logging in to a banking site
3
Mobile app form - Better Alternative to horizontal progress bar?
4
Alternative to power-hungry screen displays
2
Alternative to “click cycle” without cumbersome UI?