I have a use-case where the user (a nurse) has to enter case-notes which is a paragraph of free-format text in a box. But to speed things up, auto-complete is proposed to be offered for certain elements e.g. Drug names.

Here on typing Amox (say 4 chars) the drop down would somehow pop up and allow the nurse to select the Drug he wants.

So this doesn't fit the paradigm of a conventional drop down list nor a single Auto-complete Text Box. Most of the text is free-form text without any auto-complete. Only on specific words auto-complete is offered.

I was just wondering if such a thing has a name so that I can look up designs, implementation etc. Or just any links to other products that use this, or any libraries / widgets / toolkits that facilitate the implementation.

I don't want to re-invent the wheel and also want to avoid any pitfalls.

There is a similar design pattern that every phone or handheld has: autocorrect. If you restrict the autocorrection dictionary to the names of pharmaceutical products, would that solve the design problem?

I looked up drugs that start with "Amox…" and there were several. There must be thousands of drug names, so I can imagine that this would be useful for nurses.

This illustration is based on the autocorrect interaction of Windows Phone: 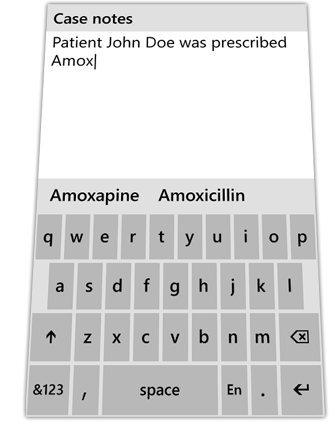 By the way, if there are more matches, then the user can flick the list left or right to scroll more matches.

This is unrelated to your core question: have you considered voice dictation as time-saving a data-entry method? You may be able to do this quite easily if the app runs on Android or iOS, because voice-recognition software is standard.

Not the answer you're looking for? Browse other questions tagged usability autocomplete textbox or ask your own question.

16
How to tell the user that an input box is autocomplete-enabled?
6
What's the best way to select a suburb from a large list on a mobile device?
5
Normal select box vs autocomplete widget UX wise
8
How to provide autocomplete and autosuggest on the same search box at the same time
5
Autocomplete / Typeahead / Find As You Type widget usability on mobile
4
What is the best way for a user to select an item by unique identifier?
3
Multi-Line Text Box vs Single Line Text Box
0
Text-styling box - is there a better name for it?