We are sending a non-technical HR rep to a career fair for university students. We are planning on hiring a few Quality Assurance (QA) interns. We like our QA interns to have some programming skills and to have decent User Experience design instincts.

We've equipped the HR rep with a few programming questions (spot the bug in this code, etc.).

I know it's a long shot because UX is way more grey than the black and white world of computer programming, but are there any quick UX design-related questions that can be used to screen out candidates early?

Sorry in advance if this is too subjective, or simply too difficult to answer. It might just be the case that UX candidates can't be screened with a trivial exercise by an HR representative.

Show some simple interfaces, give them a copy of Neilsen's 10 Usability Heuristics, and ask to identify usability issues and which heuristics are violated.

The HR rep could have a list of all the usability issues and their corresponding heuristics.

The problem with that is that it requires quite a bit of thought and time, so it might be hard to do in a Career Fair environment.

The following form screenshot is from uofadmissionsmarketing.com 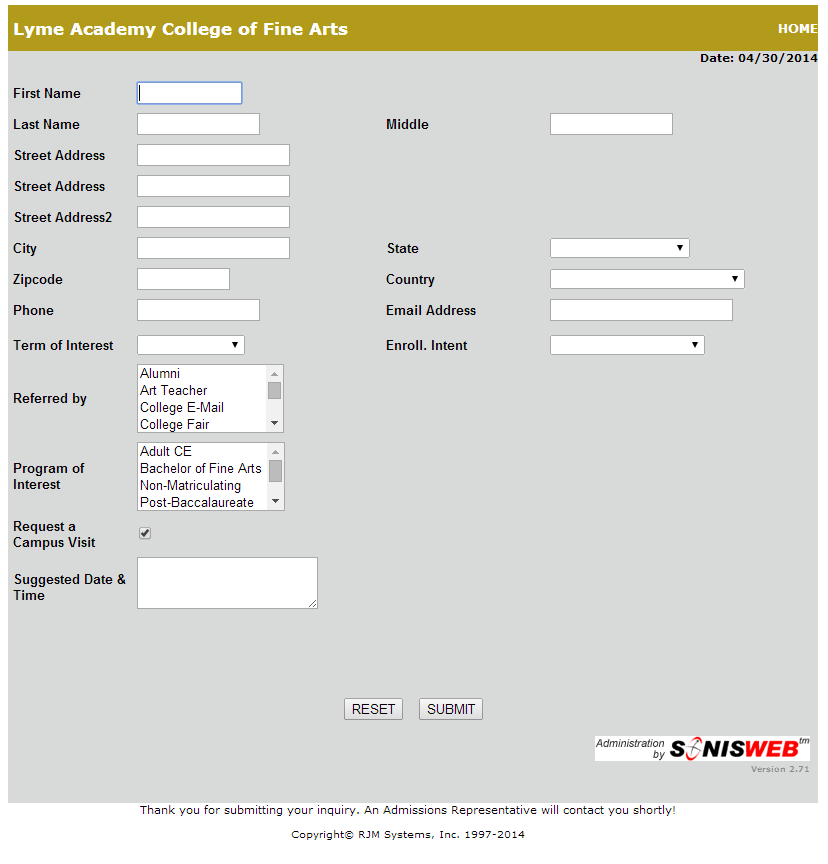 It's very hard to identify all usability issues without a live working version, but the following are some issues. We would obviously want to be a bit more thorough and note more issues if we were to give this to our HR rep, but you get the idea.

I would have lamented screen casts of a workflow or a few. And show it to them and say let's say if this was a UI for launching a missile, what would you change?

And then make it miss a fundamental UX principle like undo destructive actions.

Another scenario might be a confusing factory scenario that involves picking items and shipping them, and a need to go back. Kind of like amazons fulfillment centers or shipping a UPS package.

And then miss the key fundamental UX principles, like keeping the user informed of the system state.

Another option which takes way less prep work is Google or Bing for terrible user interfaces, show them to them and ask them what they would change and why.

It's not that easy then show them a great UI and ask them what they would change.

I answered this from a diner so if want to give it more thought but here's the scenarios for the great UIs.

Another option is have them draw a UI Have them design a UI to do something. And see what principles they talk about and mention. This may not be the best to coach up an HR person to do, but you can do it. Make sure to have 3 or 4 UIs you cycle through so people on line don't hear the design an egg timer and they are thinking about it for 45 mins while the first guy only had 10 minutes.

Not the answer you're looking for? Browse other questions tagged interview or ask your own question.

12
What general questions about UX are best asked during an interview for a UX position in general?
2
Coming up with questions for user research
2
what kind of questions should i ask the user during the user interview to get insights for revamping website on-boarding?
3
Is asking 'balanced' leading questions the right way during user interviews?
0
UX Interview Questions
0
Questions in Usability Testing without giving any lead