What is the best way to represent two scores for a square result?

I'm not sure if this is the appropriate forum for this question, so please let me know if it is not. I'm a graduate student working on figures for a research article. I have data that is being represented as a square with a circle at the upper right to represent the score of the data. 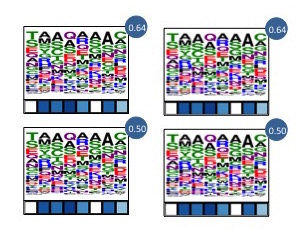 Each square is set in a row with several other squares representing other data sets. Each column shows squares in the same dataset that are supposed to be compared with each other, so the scores are meant to be easily compared by skimming the column. I now realized that there is another score that should really be included for each square. I am trying to figure out how best to incorporate that score. Here are some possibilities I thought of:

The two columns to the left show the first possibility. The second score is the yellow one to the left of the figure. My issue with this is that the two scores are next to each other in the row, which I think makes it look a bit more crowded and makes it a bit harder to compare scores down the column.

Another possibility is the two columns to the right. Here the second score is the yellow half of the circle. Again, I feel like this is difficult to compare down the column.

Is there a better way to represent these two scores? If not, which of the two alternatives is preferable?

The colors and circles add clutter, but don't add meaning to the values. You will also need labels to make it clear what each value is. I recommend against color-coding them as you will have to make an effect to avoid inconveniencing colorblind reader, and having to consult a legend to make sure you are looking at the number you think you are is awkward at best.

Simple text, above or below the box can be a good default as long as it's obvious which row the label applies to.

A better solution might be to add a "stats" column next to each box. This gives you room for more than two values if you discover you need them, and with adequate whitespace the values can still be visually scanned across rows and columns. If the two values are measuring the same attribute or are otherwise meant to be compared against each other, they should be right aligned to make this comparison easier. 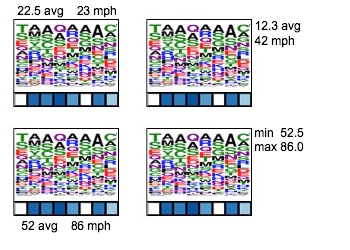 Not the answer you're looking for? Browse other questions tagged design-patterns or ask your own question.