Putting the same item multiple times in a hierarchical menu

When designing interfaces I will often go with a user intention oriented approach where the same action can be found in different places. Let me give two artificial examples:

Lets say you want to invert screen colours. Typically this is located under accessibility (as historically it's meant to increase contrast on the screen), however it's also used by people who wish to use their devices late at night. Is it a good idea to put such a setting both under Display and Accessibility.

Because to be honest I think that's great UX design, yet for some reason (nearly1) nobody seems to be doing it... so am I wrong about this?

1 Amazon is doing it a bit where their ebook section is both linked from under 'Books & Audible' and under 'Kindle E-readers & Books'. But that's just one exception for millions of menus not doing this.

The redundancy (showing item multiple times) tend to increase probability that it will be noticed (the Amazon case). The key here is not over use such redundancy and make it clear that this is the same element-location.

In both of your cases it could lead to the minor confusions:

Not a big deal but still the link, navigation and heading should clearly communicate location and its purpose. There should be no question on user side: Why if I click on 'opening hours', I see addresses? Combining both pointers in a single link actually could be a better solution. Something like 'find store and opening hours'

The question seems more about are invert screen colours intended to provide better accessibility in your case or more refined experience? If you look at usual OS settings though the functions of changing the decoration theme and more contrast or inverted color scheme sounds similar they in fact provide very different functions. In case it is really combines both functions I would be still cautious placing such global function in two different contexts but maybe keep it as in the example with 'grocery store site' in its separate location with the links from both sections.

I would say there is little, if any, need to duplicate navigational links. Have you done any usability testing to back up the efficacy of this technique? Are the users unfamiliar with the labels or naming convention that you are using?

Based on NNG's findings, redundant links on routing pages increase the perceived number of choices. Duplication can cause negative cognitive strain:

Cornell University’s Johnson School website was tested as part of our eyetracking study in 2010. The body of this routing page was well structured, containing links with succinct descriptions that explained the resulting content. However, the links in the left-hand submenu were repeats of the links in the body of the page. When people were evaluating link options, they had twice as many choices to scan because they didn't know these were redundant until they had committed the time to fixate on and read them. 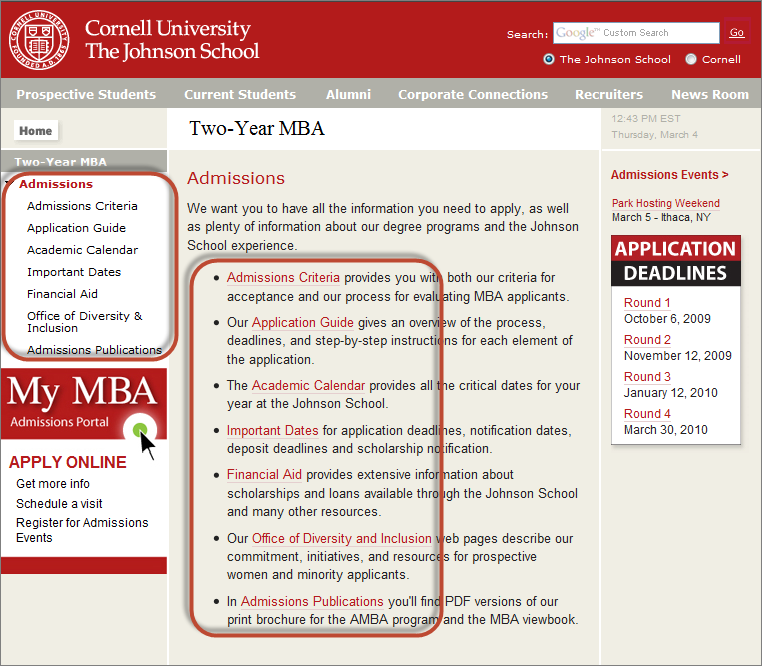 There is a prevailing belief that duplicating links is not harmful, but it is. Designers know these links are duplicates, but users do not. So, they often end up scanning both sets of links – effectively doubling the amount of analysis they need to conduct to select the best link. Repeating links burdens your visitors. (More about university websites and their frequent problems in our University Websites training course.)

1
Menu item and widget redundancy
0
Sub menu with same name?
2
Classic main-menu and ribbon at the same time?
3
Adding restaurant menu item serving hour
4
What is the best layout for a hierarchical menu with multiple actions?
0
Are there any usability issues with putting a file menu in an application's chrome?
4
Add clipboard Cut menu item when you already have another menu item that really Cuts
1
What happens when a primary nav link is used as a sub-menu item of the same link?
1
Footer menu same as Menu
0
Linking a sub-menu item to another main menu item