I'm having a bit of trouble with wording on a title for a feature I'm building for an app. I have 3 options which seems correct at first view, but I really don't think I'm getting the correct wording for what I want.

As you can see, it's very simple, just a connection detected. This connection is an external device, and users can have more than 1 device connected to the app, however this won't be the norm and in general they'll have only one (just in case it helps to an answer)

Also, the ability to connect a device is a desired thing for users, and there are emotional, usability and practical rewards to this. HOWEVER, there might be users with no connected devices, so I don't want to belittle them or their experience. This is a very important concern.

The body has the following text and some additional options:

Finally, this is an informative message that shows at any time, not just when the connect action is performed.

What I have so far is this, but absolutely open to suggestions: 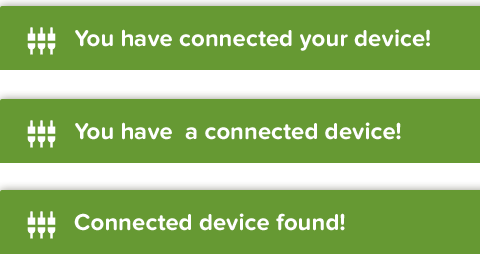 what I see in these 3 options:

On top of all this, and related to the above, I have to show a different message to users who have no connected devices. What I have so far, and this really could use some help, because they sound too negative:

You already have the phrases that will work, I believe. And a few that won't, as you've no doubt recognised.

When a device gets connected

The first choice assumes that connection is always a result of a direct user action, so not merely because someone walked into Bluetooth range, for example. Also, the phrase can be ambiguous. "You have connected" is a passive verb form, best to avoid passive structures. I realise that it's actually "You have" and "connected devices" but a message that has two meanings—however similar—is unnecessary, and more challenging for people who are learning English.

The second choice allows you to confirm the quantity, which is one of your goals. You're showing the status and count elsewhere in the UI. You can be consistent in the notification message.

The third choice is quite passive. It's like your system isn't interested in the user. In addition, it takes the focus off the core idea, connection, and introduces some doubt: there could be connected devices that somehow haven't been found?

When no devices are connected

While "found" works in the negative case, it isn't idea in the positive case, as mentioned above. And since you want to use consistent language, that rules out "found."

Something that might improve the negative message is providing some motivation. You're concerned about belittling the user, so do this carefully.

"No devices connected. If you're feeling lonely, connect a device."

Ease up on the excitement … !

There's no need to use an exclamation mark. It suggests a level of excitement that's unwarranted, which can seem plastic or artificial.

Just a thought: Can you do anything with icons, especially when there's only one device connected, or to reinforce the motivation?

The above icons are half-baked examples to get you thinking about it.

This seems like an intriguing project. Can you share a few more details, for the sake of interest?

As you said the first option sounds like an immediate response as soon as the connection is established.

The only problem I have with the rest of the choices is they are singular by nature. Although you said users wouldn't often connect multiple devices they will sometimes and when they do simply stating "Connected device found" will lead them to ask "Which device?" "Where are the others?"

For that reason I would say use the same phrasing as in the body text.

Or since you know most of your users will only have 0-1 devices you can account for those cases.

But the key here is to keep the phrasing consistent and informative for all of the users not just the most common ones.

For your second issue, I'd make it a button that states "click here to connect your first device", and that button then leads to the page where the user can connect their devices. This way, you subtly encourage their user to connect a device while not being so negative.

If you want, you can make a corner or the side of that button have a different function to hide the button, in case the user genuinely has no interest to connect devices.

2
Wording suggestions for "unhidden", esp given translations
62
What is the recommended wording for a generic error message
8
Good wording to indicate Export and Download action?
0
Duplicate Entry Message Wording
3
A word for "not handheld device"?
27
Wording: 0% or NO?
0
What would be the wording for an "all type of rooms" taxonomy?
57
Proper wording for "Cancel Undo"?
0
More intuitive navigation solution
2
Teasing Dashboard reports. Use dummy data or empty reports?