How to best understand users' emotions?

We found that 5 reaction choices was the optimal amount, and currently we offer these 5 emotions as default: happy, amused, angry, indifferent, excited.

I was hoping to find out - from a user experience perspective - if you think there are more useful emotions options we could use to better understand users.

(e.g. would "sad" be more useful than "indifferent"; should "interested" replace "amused"?, etc.)

3 positive options, 1 neutral and 1 negative, and that makes 5 in total to strike a balance. The choice of labels and emoji/smiley should target the least negative emotion and the least positive emotion; because you have to cross the minimum threshold to be in the extreme/maximum. If you are fishing for data then this is the best option. Also emotions are quite linear.

As a company that builds widgets for human emotions, I recommend you mix the principles of user experience and data from research studies to improve the product.

The University of Glasgow published a research paper last year.

Human beings are emotional creatures whose state of mind can usually be observed through their facial expressions.

i.e. Our face is a transmitter, it transmits signals like our emotional state. In the interwebs, we use smileys and emoji to match this. 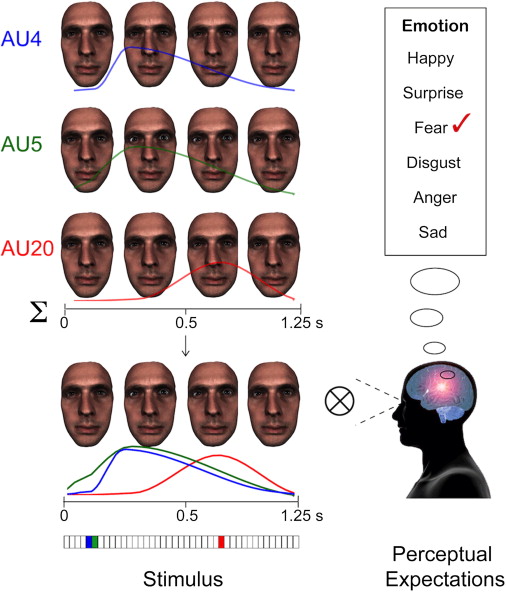 six basic emotions which are universally recognised and easily interpreted through specific facial expressions, regardless of language or culture. These are: happiness, sadness, fear, anger, surprise and disgust.

Since you particularly express the state of the emotion with smiley faces, I believe this should help you narrow your options. 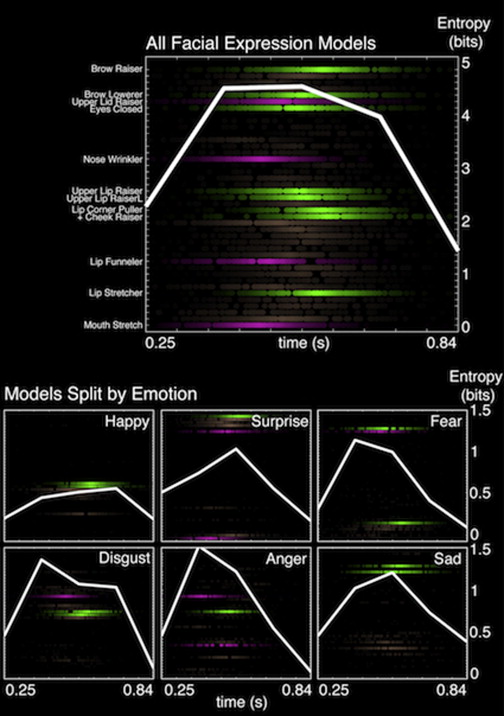 Our research questions the notion that human emotion communication comprises six basic, psychologically irreducible categories. Instead we suggest there are four basic expressions of emotion.

And the plot thickens...

In a nutshell, they built and used a Software to tell similarities in human emotions. By using these methods and techniques, they've determined that humans exhibit 4 unique emotions. 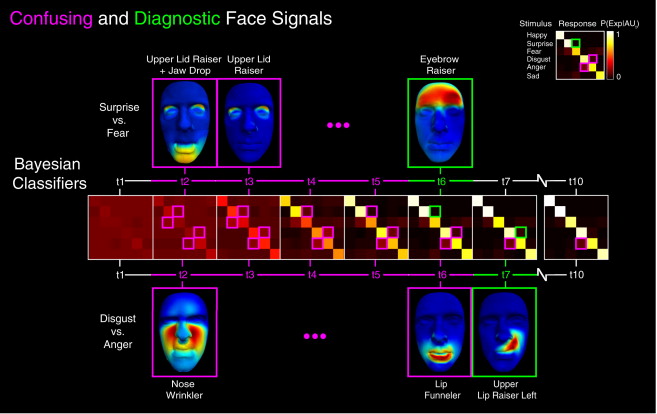 More resources linked to this research is available on this site, with a very nice video demonstration.

The next 2 paragraphs of this post might seem off-topic but keep up with me... I have an uncanny knack for bad examples while trying to make a point. You can skip to [SECTION B] if you wish.

Biologically, we are just like computers. So everything we have is quantifiable and can be proven to be scientifically accurate. In other words, the chances of a Mr. Anderson turning Neo IRL is questionable.

The brain processes stimuli and outputs a response based on a series of conditional statements and loops encoded in your mind. It’s doing it right now. Sensors in the medulla oblongata are gauging oxygen and carbon dioxide levels in our blood. When they reach a defined upper limit, the medulla oblongata sends signals through your nervous system to the diaphragm, lungs, and intercostal muscles, causing you to exhale and inhale. In a sense, our medulla oblongata is doing something that looks like this:

When a program has to interact with the real world, it uses sensors, radars, signals, and receptors. When we interact—touch, sight, body language, and linguistics are used.

Okay why did I force you to read that?! Because I wanted to introduce you to the similarities between a computer and a human. And just like computers and software, we're programmed to work/function the same. Our personality is what distinguishes us. But emotionally (i.e. visually like UI) we react the same way.

Assuming emotions have an origin or something in common, like objects encapsulated from a class and looking at linguistic surveys... where traditionally they ask "how satisfied are you between 1 to 10" etc patterns; we can establish (for the sake of my rant) that satisfaction determines the emotion then... 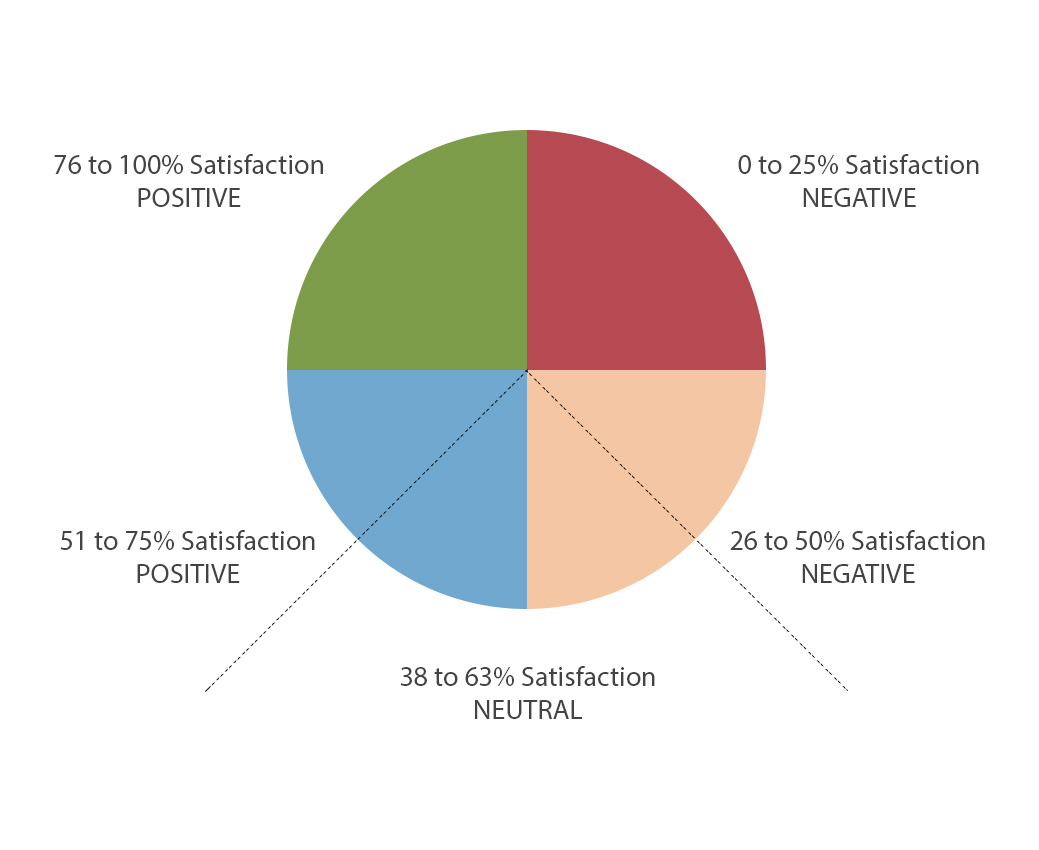 @DasBeasto is right about the Cognitive load on the user; that's what User Experience and Information Architecture is all about.

I'd argue that emotions are binary. We're either satisfied or not satisfied. Facebook took it a step further, with just "like"; reducing the cognitive load to the least possible value.

From Bret Taylor, the inventor of the Like button

I have the feeling that if there were to be a 'dislike' button is that you would end up with these really negative social aspects to it,” Taylor explains. “If you want to dislike something, you should probably write a comment, because there's probably a word for what you want to say. I'm not saying the 'like' button isn't flawed would it be even more complex with a negative sentiment like 'dislike'.

Which is debatable, as nothing good every spawns from negativity.

But when you build a product around emotions you shouldn't focus on binary options.

3 of the 5 are positive emotions: Happy, Excited, Amused

1 of 5 is nuetral emotions: Indifferent

1 of 5 is negative emotions: Angry

You're setting up your ratings for a positive bias from the get go.

Not everyone that doesn't like the content of an article is angry. What if the content is just poorly written, or what if a favorite actor died, or if it is about quantum physics. In these cases the reader may feel confused or sad or any number of negative emotions, not necessarily angry.

Also I couldn't tell you the difference between happy and excited in terms of an article. To me they both imply that I had a positive reaction to the article and I liked it. Even amused sounds like a synonym to me, just a lesser degree of happiness. Not sure if the numbers are real data but if so I'd say the fact only 10 were excited shows that they didn't know the difference either and simply went with happiness.

In my opinion I would go with a simple "Like" "Dislike" "Indifferent" option. Less cognitive load on the user trying to differentiate between options and more meaningful and actionable data for the writers.

I'd add annoyed and bored. Happiness sounds like a consequence of being excited or amused and indifferent could just be no vote but if you want to keep it neutral you can use something like:

Not the answer you're looking for? Browse other questions tagged content ratings voting emotion analytics or ask your own question.

22
What is the best voting system
4
Effect of allowing users to give both positive and negative feedback vs. giving positive feedback only
32
How do you make users vote objectively and not from emotions?
4
Making Creative Commons licenses easy to understand
4
Best way to present a 5-star rating system
1
Require users to sign up or login to upvote or downvote review items on a user-generated content site?
2
How to show the result of a simple yes/no feedback vote?
3
How to present analytics on website redesign?
3
What's the Best Way to Design Entry Points Based on Emotion/Confidence
0
How do we get users to rate documents?