Best way to lay out home page of mobile app

I'm redesigning a mobile trivia app, and on the homepage, there are radio buttons that let the user choose the difficulty, and then there are also 3 buttons that start the game. The current layout looks like this: 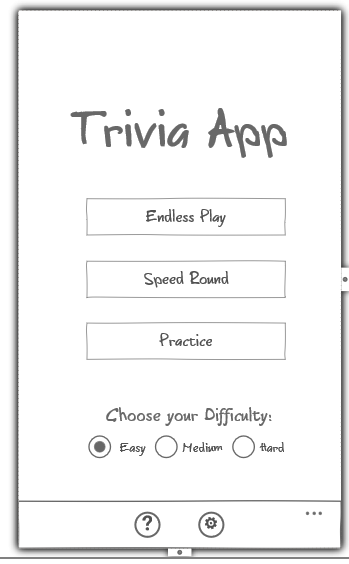 I'm just wondering -- is there a better way to lay it out? It seems weird to have the options and the start buttons be on the same screen, but it also seems to inconvenient to have the user have to leave the home page to change the game difficulty (which they probably do a lot, looking at the leaderboards).

This is a pretty simple interface so I only see three options:

First of all I want to say I would rule #2 out because there is no need to make the user select their difficulty every play through. In the beginning the user may shift through a couple times to find the difficulty they like but then they will want to stay at that difficulty for a while (until they feel they have gotten better). So forcing the user to select the same difficulty every time they play is adding an unnecessary click.

While I just made the case that the user won't often need to access the difficulty setting which would make you think the hidden setting menu would be best, they will still have to do it every now and then. Your current home screen is so simple that it has no negative repercussions for leaving the difficulty selector there. It is simple to choose if they need to but easy to ignore if they don't. Hiding it in the settings menu will at minimum add an extra click and at most the user won't know the option even exists.

Unless you add more elements to the home page, in which case you might consider moving it into the settings menu.

I like the current layout. But I would probably ask the user to select the difficulty every time they press a start button

Not the answer you're looking for? Browse other questions tagged gui-design mobile design-patterns or ask your own question.

1
What to include on an app's home page?
0
User interface suggestion for 2 Buttons in Android
6
Best way to show tabs in UI
0
Should I make an effort to prevent trivia questions from being repeated too quickly?
0
Menus Depth in Mobile Games
6
Nesting checkboxes inside a radio button: Is there a better way?
1
Put large table and form on one centered layout
2
Best way to make an “easy, medium, hard” picker